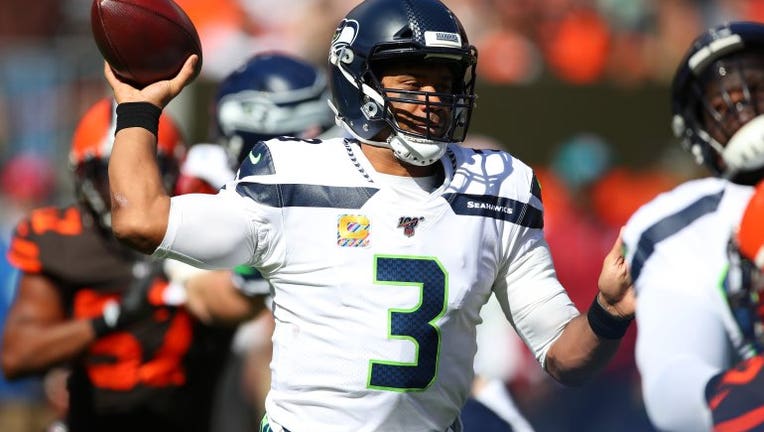 Russell Wilson #3 of the Seattle Seahawks throws a first quarter pass while playing the Cleveland Browns at FirstEnergy Stadium on October 13, 2019 in Cleveland, Ohio. (Photo by Gregory Shamus/Getty Images)

RENTON, Wash. -- The last time the Seattle Seahawks started the season 5-1, they ended the year claiming their only Super Bowl title.

Right now, the Seahawks aren’t even the best team in the NFC West. That distinction belongs to undefeated San Francisco. But there are plenty of signs that a special season could be developing in Seattle.

They are unbeaten on the road after Sunday’s 32-28 win in Cleveland, overcoming an awful start to rally from 20-6 deficit and reached 5-1 for only the third time in franchise history and first since 2013. They continue to find a formula that works with a defense giving up plenty of yards but creating timely turnovers and being tough to score on in the red zone.

“Our guys took charge really up front on both sides of the ball from what had looked like the beginning of disaster,” Seattle coach Pete Carroll said.

And then there is Russell Wilson, who continued building his early candidacy for MVP with another error-free performance against the Browns. Wilson was 23 of 33 for 295 yards, two touchdowns passing and one running. He’s responsible for 17 total touchdowns through six games and has yet to commit a turnover.

“I think the best way to put it is that No. 3 is in his bag right now. Top of his game,” Seattle cornerback Shaqill Griffin said. “That is the person we look up to and believe in. He believes in us. We are going to keep on doing that. We are going to keep doing what we have to do to win these games.”

The Seahawks still have injury concerns on the offensive line with Duane Brown and D.J. Fluker uncertain for this week. But just in time to face one of the more challenging offenses in the league with Baltimore visiting this week, the Seahawks are getting defensive tackle Jarran Reed back from his six-game suspension.

Seattle’s confidence and belief in Chris Carson is paying off. He could have been benched after losing three fumbles in the first three games. Carson has posted at least 100 yards in each of the next three games, including his career-best 124 yards against the Browns on Sunday. It has helped that Seattle has stayed in better down-and-distance situations giving Carson more opportunities at carries, but he’s also been more productive with those additional rushes. Carson is averaging 115.3 yards per game and 4.7 yards per carry over the past three.

Seattle didn’t get much, if any, pressure on Cleveland QB Baker Mayfield. Some of that was by design, according to Carroll. Cleveland called a number of quick passes to get the ball out of Mayfield’s hands, and Seattle was primarily focused on stopping the run. Nevertheless, the lack of QB pressure continues to be a concern. Seattle finished with zero quarterback hits and began the week with only 18 on the season. Reed’s return should help, especially if he can approach the kind of pressure he created last year when he had a career-high 10 ½ sacks.

WR Jaron Brown had zero targets the first two weeks of the season. He was on the field, but was invisible. No matter how much coaches and Wilson said they wanted the ball going his direction, it wasn’t happening.

That changed starting in Week 3 and he capped this run of more throws coming his way with two touchdown grabs against Cleveland. It was just the second multi-touchdown game of Brown’s career, the other coming in Week 13 last year when he had two TDs against San Francisco.

Michael Dickson was a first-team All-Pro as a rookie last season. He hasn’t approached the same level of consistency or distance with his kicking yet this season, including a forgettable 23-yard punt out of his own end zone that led to a Cleveland touchdown in the fourth quarter.

Seattle lost TE Will Dissly for the season with what the team believes is a torn Achilles tendon. Carroll said the team has not received a final confirmation of the diagnosis, but all signs point to Dissly being out for the season. Dissly missed most of last season after suffering a ruptured patellar tendon. He had developed into one of Wilson’s favorite targets with 23 catches and four touchdowns.

It’s reunion time. Seattle welcomes Baltimore on Sunday and will see former All-Pro safety Earl Thomas, who left the Seahawks acrimoniously in free agency during the offseason. The last time the Seahawks saw Thomas in person on the field, he was leaving on a cart in Arizona after suffering a fractured lower leg in Week 4 of last season and giving Carroll a one-finger salute on his way off the field. There will be plenty of cameras following Thomas in his return to Seattle on Sunday.