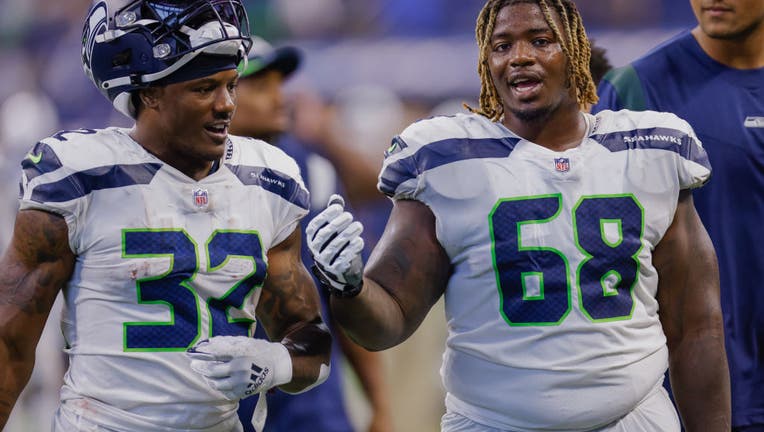 INDIANAPOLIS, IN - SEPTEMBER 12: Chris Carson #32 and Damien Lewis #68 of the Seattle Seahawks are seen after the game against the Indianapolis Colts at Lucas Oil Stadium on September 12, 2021 in Indianapolis, Indiana. (Photo by Michael Hickey/Getty

RENTON, Wash. - The Seattle Seahawks will be without starting left guard Damien Lewis and running backs Rashaad Penny and Travis Homer on Monday night at Washington.

Seattle coach Pete Carroll said Saturday that Lewis hyperextended his elbow in last Sunday’s loss to Arizona. The Seahawks will also be without reserve offensive lineman Jamarco Jones meaning Kyle Fuller and Phil Haynes are the likely candidates to fill in for Lewis.

Jones has been bothered by a back injury and injured reserve may be an option.

Penny suffered a hamstring strain on the first play of the game last week against Arizona. Penny sprinted for an 18-yard run but was in for just a small handful of plays after. Carroll said injured reserve could be an option for Penny, who missed time earlier in the season with a calf injury.

Homer, primarily a third-down running back and a key special teams contributor, is out with a calf injury.

Without Penny and Homer, the Seahawks have just two healthy running backs in Alex Collins and DeeJay Dallas.