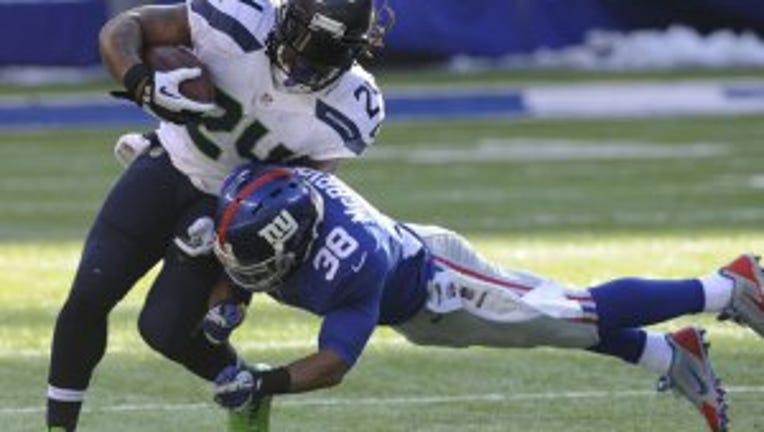 NEW YORK -- The Seahawks defense was unstoppable Sunday in MetLife Stadium, clocking 5 interceptions in a 23-0 shutout of the New York Giants.

In a possible dry-run at the stadium that will host this year's Super Bowl, the Seahawks were dominant on both sides of the field, with the score not nearly as lopsided as it could have been as the Hawks failed to punch it in to end numerous drives. The Hawks (12-2) came one step closer to wrapping up their division and home-field advantage throughout the playoffs. A win next week over the Arizona Cardinals and a loss from the New Orleans Saints will accomplish both.

In a game that looked as lopsided as any, the Hawks offense racked up 327 total yards, with 134 yards rushing and 193 passing. They also dominated time of possession, with the Hawks holding the ball for 33 minutes.

Wilson ended his day going 18-for-27 with one touchdown and an interception late. Backup quarter back Tarvaris Jackson even saw some action, going 2-for-2 when he came in late to run out the clock.

But it was the defense that was the main story in Sunday's drubbing. Cam Chancellor, Earl Thomas, Richard Sherman and the rest of the Hawks' secondary held Manning to 156 yards passing and five -- count them five -- interceptions, including two for Sherman and two for Byron Maxwell. The team also secured four sacks, with 1.5 coming from linebacker Bobby Wagner.

"That's as good of a day in coverage as I've seen," Seahawks Coach Pete Carroll said after the game.

It was the first time the Giants have been held scoreless at MetLife Stadium this year, despite their well-documented offensive woes.

If one were to get nit-picky, some question marks remained in the Seahawks offense, as the team was again held back by eight penalties for 50 yards. Marshawn Lynch's struggles continued, as he failed to get over 100 yards for the fourth game in a row,  gaining 47 yards on 16 carries.

Still, the Hawks liked the vantage point from MetLife, and hoped to get back there for Super Bowl XLVIII in February. They will look to wrap up the division next week against the surging Arizona Cardinals (8-5).

Live updates from the game

-- Darn. That whole thing was fun to watch, but it looks like the Giants receiver was down.

-- Seahawks are wrapping it up here, Tarvaris Jackson is in and the Hawks look to run the time out. Great game for the Hawks.

-- Jeremy Lane has had an All-Star game. He's been targeted, and he's shown nothing but good things.

-- It's all Seahawks right now. Wilson hits Baldwin four the touchdown to put the Hawks up 23-0 with 12 minutes left to go in the fourth quarter.

-- Wilson takes off and slides down at the 5. Wilson rarely takes off, but when he does, it's usually for a nice gain.

-- After an interception by Russell Wilson, Byron Maxwell picks off Eli Manning to put the Hawks on the Giants' 20. What a game from this Seahawks defense.

-- Again, the Hawks are forced to punt. As much as they're dominating the game, the Giants are still with a three score game. Manning can really cruise on those ending drives...

-- Bobby Wagner records his second sack of the day and the Giants are forced to punt. Their offense has stalled something fierce today.

-- The Hawks have dominated nearly every aspect of the game, including total yards, time of possession and first downs. Sixteen points seems like a lot, but it could, and should, be much more.

-- Hawks have first and goal from the 6-yardline of the Giants. Lynch comes up a yard and a half shy. Stuff him on second and goal.

-- The announcers are talking about Russell Wilson and his draft in the Rule 5 baseball draft this week. Should the Mariners have grabbed him?

-- Giants are forced to punt from their own endzone and the Hawks take the ball out to the Giants' 45. Looking good, Hawks.

-- Hauschka nails a 44-yard field goal with three seconds left to go in the half. The Hawks are up 13-0 on the Giants.

-- Tate caught a ball in the endzone, but the touchdown was taken away because he was out of bounds. Wilson scrambles on first and 15. Less than a minute left before halftime.

-- Hawks have their first first down on a third down of the game. We know that sentence is confusing, but we hope you get it anyway. Golden Tate and the receiving core has certainly stepped in with Rice, Harvin out.

-- Jeremy Lane with another tackle for the Hawks. His speed is spectacular. Giants are forced to punt, and Tate gains a couple of yards.

-- Nice return from the Giants, but also a nice tackle from Lane. Lane's prescence on special teams has certainly been felt today.

-- TOUCHDOWN SEAHAWKS! Marshawn Lynch has his first touchdown of the game to put the Hawks up 10-0 with 5:30 left to go in the first half. Now we're seeing the boys we know.

-- Seahawks are driving. Wilson to Baldwin gets a first and goal for the Seahawks. Baldwin and Wilson are looking great. Marshawn Lynch then takes it to the 2-yard line. Lets see 7 here, boys.

-- Sherman interception! Seahawks get the ball at the Seattle 38. Lets see if we can get something here. #YoumadBro?

-- Again, the Hawks can't convert. Wilson takes another slam at the end. Come on Hawks.

-- Lets see if the Hawks get it going this drive. They're only up 3, with 11:55 left in the 2nd quarter. Don't want to be close at the end, we all know what Manning has done in close games. #SuperBowl

-- Wilson goes down on third down for the Hawks first given sack of the game. The Giants' fans are starting to get into the game.

-- Interception Maxwell! Seahawks get a nice turnover to end the first quarter.

-- Lynch was considered out of bounds and Seattle has to punt. Eli Manning and the offense will get the ball on the 20. The Hawks have been driving, but with little to show for it so far.

-- Those are the moves that Russell Wilson is known for! Wilson ducks and dodges the Giants pass rush to get a big first down to Lynch. What a play from him. He is 5-for-6 so far, with the only incomplete pass arguably dropped by Tate.

-- Malcom Smith comes forward with a big tackle to stop the drive. Tate fair catches the ball, and gets it deep in their own territory. Lets see if the Hawks can't get into the end zone this time.

-- Manning hasn't had time all year, the announcers are saying. The Hawks have already gotten to Manning a couple of times. But on 2nd down, he is good for 20 yards to Myers. He still looks like a Super Bowl winning quarterback. He just doesn't have the Super Bowl line.

-- Already 3 first downs for the Seahawks. They are 2nd and 10 from the New York 30. Wilson and Lynch have some good tempo going.

-- The Hawks secure their first sack of the game. Avril and Wagner double up on a sack of manning. Golden Tate gets a 20-yard return to put the Hawks on the Giants' 42 yardline.

-- Seahawks can't quite complete on 3rd and long and are forced to punt. John Ryan has been getting a lot of attention this week for his good punting, as the Hawks have only given up 15 yards of total return this year. Ryan's punt secures a fair catch, and the Hawks are closing in on the record.

-- Another first down on a 15-yard pass to Golden Tate.

-- Russell Wilson has the the ball and gives it to Lynch, who takes it out to the 30. Already a first down for the Hawks.

-- Kickoff! Giants won the toss and Seattle gets the ball on their own 20 yardline.