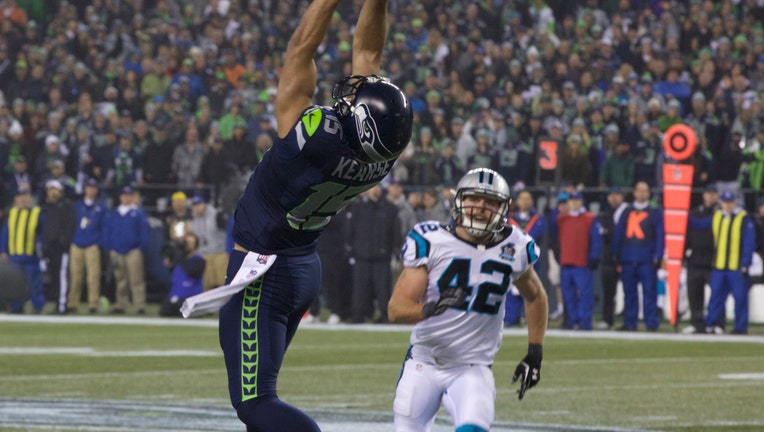 SEATTLE — In the beginning it was a grind. In the end it was almost a blowout.

The Seattle Seahawks battered, bruised and then strolled their way past the Carolina Panthers 31-17 to move on to the NFC Championship game.

Defense, turnovers and mobile quarterbacks ruled the story line Saturday as an often hurried Russell Wilson and the Hawks relied on timely big plays and turnovers to secure a trip to their second straight Championship game.

The Seahawks will face the winner of the Dallas Cowboys vs. Green Bay Packers tomorrow.

For a long time Saturday, a win wasn’t a sure thing. Offenses took time to get moving, with both teams stifled by tough defensive lines.

Sherman secured an early interception, and a fumble recovery by Michael Bennett in Panthers territory set up a 16-yard touchdown pass from Wilson to Doug Baldwin with 56 seconds left in the 1st Quarter to put the Hawks up 7-0.

The Panthers answered though, anchored by a strong rushing game and a poised Cam Newton to beat their way down the field in a 14-play, 79 yard touchdown drive capped with a 7-yard pass to Kelvin Benjamin.

The first big play for the Hawks came with five minutes left in the first half when Wilson hit Kearse for a 63-yard, one-handed touchdown catch. The catch set the record as the Seahawks longest passing touchdown in the postseason, and was part of Jermaine Kearse’s career high 129 yards receiving.

That wasn’t the only record that would be broken by the Hawks Saturday.

Dueling field goals at the end of the second half and third quarter set up a 17-10 Seahawks lead. Then the Hawks broke away, going on a 6 play, 58-yard drive that ended with a 25 yard TD catch from Wilson to Luke Willson.

The nail  in the coffin came with 6:11 left in the 4th Quarter, when Kam Chancellor intercepted Cam Newton for a 90-yard pick-6 to put the Hawks up 31-10.

The 90-yard runback was the Hawks longest scoring play ever in the postseason, passing last year’s 88-yard kickoff return from Percy Harvin in the Super Bowl.

“It felt awesome,” Chancellor said after the game. “That was the first return of my career.”

The Panthers would score again late, but it wasn’t enough.

The heavily favored Hawks dominated the turnover battle with plus-3 turnovers, giving a competent but not electric Cam Newton too much to overcome on the road. Newton finished 23-for-36 with 246 yards passing, two touchdowns and two interceptions. Bruce Irvin and Cliff Avril secured the only sacks against Newton, both comin in the second half.

In credit to the Panthers’ defense, Lynch and the running game was largely bottled up, with Number 24 finishing with 59 yards on 14 carries.

Looking ahead, the Hawks have faced both the Cowboys and the Packers at home. The Hawks beat the Packers 36-16 in the first game of the season, but lost to the Cowboys 23-30 in Week Five.

The NFC Championship Game will be broadcast next at 12:05 p.m. Sunday on Q13 FOX.