However, privately Carroll and his players and staff believed a rout of the Broncos was possible.

On Sunday, in front of 85,529 at MetLife Stadium, the Seahawks made it happen, dominating Manning and the Broncos in every phase in a 43-8 victory.

"It happened exactly the way we pictured it," Carroll said. 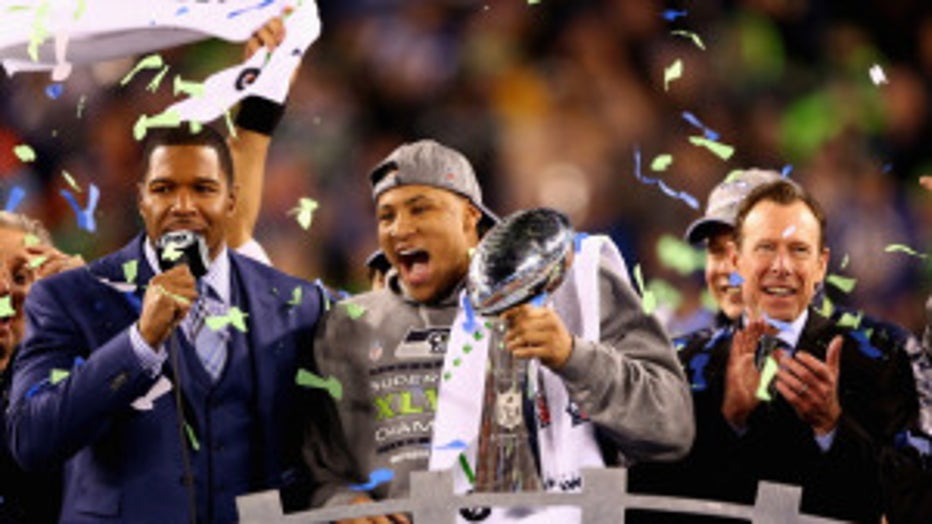 The Seahawks' first Super Bowl title was a crowning moment for Carroll, who was fired by the NFL's New York Jets and New England Patriots in the 1990s before restarting his career at USC and becoming one of the most successful coaches in college football history.

The blowout was reminiscent of the finish to USC's 2004 season, when Carroll unleashed the Trojans in a 55-19 rout of Oklahoma to win the Bowl Championship Series title game in Miami.

"It feels very much the same," said Carroll, only the third coach to win a college football national title and a Super Bowl. "I know this is the NFL and all that, but the way the team came together, the way they performed under this kind of scrutiny very much resembled the stuff we've seen before."

No one had seen much of Percy Harvin this season as the speedy receiver sat out all but a few games while recovering from hip surgery and then suffering a concussion.

But after the Seahawks took advantage of a safety and two interceptions to build a 22-0 halftime lead, Harvin put the game out of reach by returning the second-half kickoff 87 yards for a touchdown.

The victory put a finishing touch on a season that began with the Seahawks regarded as Super Bowl front-runners.

They lived up to the billing, finishing the regular season with a 13-3 record before dispatching the New Orleans Saints and the San Francisco 49ers to reach their first Super Bowl since the 2005 season.

"At the beginning of the season, I told our guys, 'Hey, why not us?'" said Seahawks quarterback Russell Wilson, who passed for two touchdowns. "We believed we could get there. We had the talent. We had the coaching staff. We have the best fans in the National Football League."

On Sunday, the Seahawks were without their ear-busting "12th Man" crowd that fills CenturyLink Field in Seattle.

But in the first half, Manning kind of filled the role of an extra Seattle player, assisting the Seahawks with errant throws that resulted directly or eventually in touchdowns.

"We were who we were," cornerback Richard Sherman said. "We didn't change anything."

Manning, the five-time NFL most valuable player, could only watch helplessly as the game's first snap sailed over his head and into the end zone, where Denver running back Knowshon Moreno fell on the ball for a Seattle safety.

The Seahawks added two first-quarter field goals, then their front pressured Manning into poor throws that were intercepted by safety Kam Chancellor and linebacker Malcolm Smith, resulting in 14 Seattle points.

The interception by Chancellor, part of Seattle's "Legion of Boom" secondary, set up a 37-yard drive to the game's first touchdown. Then Smith, who made the game-saving interception in the NFC championship game victory over the 49ers, returned one 69 yards for a touchdown that made it 22-0. Smith later recovered a fumble, en route to being voted the game's most valuable player.


Manning did establish one Super Bowl record by completing 34 passes. But he had only 280 yards, his only touchdown pass coming on the last play of the third quarter.

"We played a great football team," said Manning, who fell short of adding another Super Bowl title to the one he won with Indianapolis. "We needed to play really well in order to win, and we didn't come close to that."


Not against a Carroll-coached team that seems to thrive on a positive-reinforcement, let-individuals-be-themselves mentality.

After he was fired by the Patriots, Carroll spent the 2000 season out of coaching but studying John Wooden's career path and philosophies. He also honed his own, preparing for his next chance.

It came at USC.

Despite being the fourth choice for the job, he returned the Trojans to prominence, winning the Associated Press national championship in 2003 and demolishing Oklahoma in the BCS title game the following year. Carroll turned down several opportunities to return to what he called the "No Fun League," before Seahawks owner Paul Allen lured him to Seattle.