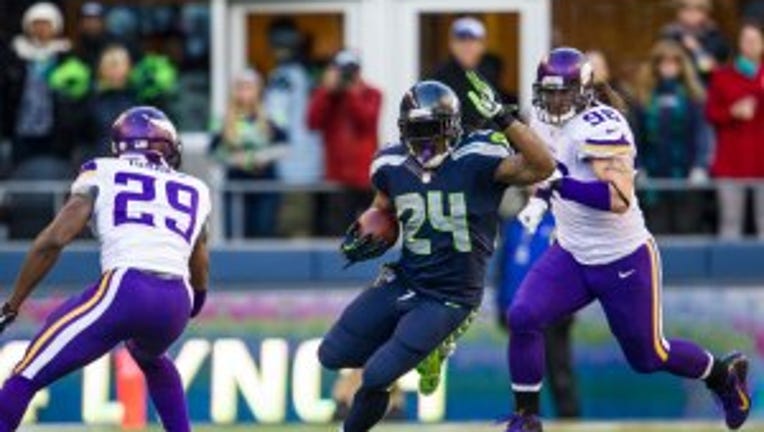 SEATTLE -- With a 10-1 record and the Seattle Seahawks handily beating the Minnesota Vikings 41-20 at CenturyLink Field Sunday, is it possible to say the Seahawks' best games are ahead of them?

With many Pro-Bowl caliber starters returning to the line-up as the team heads into a bye week, it's safe to hope the Hawks' best games are yet to come.

Still, Pete Carroll would like to see the team keep rolling, not interupted by a break.

"The bye doesn't come at a great time," Carroll said Sunday following the game, a smirk on his face. "We'd like to keep playing."

Like many other times this season, the outcome of the Sunday's game seemed decided early into the third quarter.

While many of the stats went the Vikings way -- such as time of possession, total yards, rushing and penalties -- the Seahawks came out ahead on penalties, recovering a fumble and forcing two Vikings quarterbacks to throw three interceptions, including a 29-yard pick 6 interception return from Walter Thurmond.

The Seahawks scored four times in a row from the end of the second quarter to midway through the third quarter, cementing a victory before the third quarter clock had even run down. In a game that featured the two best running backs in football, Seattle's Marshawn Lynch and the Vikings Adrian Peterson remained fairly quiet, with both failing to crack the 70-yard rushing mark for the day.

Quarterback Russell Wilson again showed his grit and game at CenturyLink, going 13-for-18 with two touchdowns. Wilson is yet to lose at home in his young career, with 21 straight wins under the roar of the 12th Man.

And while Tavaris Jackson came into the game in the third quarter once the Seahawks had a solid 20-plus point lead, Minnesota also switched up their quarterback, taking Christian Ponder out of the game after his second interception and a quarterback rating of 53.0.

For the Seahawks' defense, Bobby Wagner lead the team with nine tackles and a sack and Thurmond, Wagner and McDonald all walked away with interceptions.

The Seahawks will have next week off with a bye, giving players such as Percy Harvin, Brenno Giacomini and Russell Okung time to rest as the team heads into a tough stretch, facing the New Orleans Saints on Monday, Dec. 2 at CenturyLink Field.

Live updates from the game

-- Vikings score late to cut the Hawks lead to 21.

-- Minnesota can't complete on fourth down and the Hawks takeover the ball on their own 10. This game is looking pretty well wrapped up with 5:31 left to go.

-- The Seahawks go up 41-13 when they nail a field goal with 10:12 left in the first half. This is coming off the interception from Chris Clemons.

--Matt Castse is in for Vikings. Ponder's day is done. He threw two interceptions and was 12-for-22 and a quarterback rating of 53 points.

-- Walter Thurmond III with the pic 6! Puts the team up 38-13 with about 12:30 left to go in the game. It's mostly Hawks to this point, and Ponder's game just keeps slipping.

-- Russell Wilson with an underhand flip to Marshawn Lynch. The TD puts the Hawks on top 31-13 with about 13 minutes left in the game.

4th Quarter -- Bobby Wagner sure caught that one. Wagner's interception gives the Seahwks the ball on the Vikings' 18. Wilson scrambles on the first play and gets to within 5.

-- The #Seahawks head into the 4th leading 24-13. #GoHawks #Louder #FEEDTHEBEAST

-- Golden Tate comes up with his first reception of the game. The catch puts the Hawks near midfield.

-- Bobby Wagner dropped a sure to be pic-6. Instead, the Hawks will get the ball around their own 20, still leading by 11.

-- Can't understate how important John Ryan's punt game is to the Seahawks. The number of times he's kicked it down inside the 10 is phenomenal.

-- Ponder is having a decent game, going 9-for-13 with 114 yards and one TD. But of course, Wilson is also having a good game, going 10-14 with 185 yards. K.J. Wright stops a first down, and the Seahawks get the ball back with about 12 minutes left in the third quarter.

-- Seahawks have to punt on their first possession in the first half. John Ryan has kicked well.

Third Quarter -- Percy Harvin was slated to return another kick, but the Vikings pooched the kick. Didn't get to see lightning a second time.

-- TOUCHDOOOOWWWWN SEAHWKS. Following the long return from Perc Harvin, the Seahawks go up 24-13 with 10 seconds left in the first half.

-- Percy Harvin with a 58 yard return puts the Hawks in Vikings territory. This guy is a game changer. It's awesome to watch.

-- Vikings hit a field goal to come within four. Hawks lead the Vikings 17-13 with 48 seconds left in the first half.

-- Christian Ponder has some good throws so far, and Adrian Peterson has yet to break one. This is a little bit more of a game than the Seahawks were hoping for so far. But it's a good watch.

-- Vikings are statistically even with the Seahawks so far. BUT, the Hawks are up by seven.

-- Touchdown Seahawks! Marshawn Lynch had it all the way, and has is second of the game. Hawks go up 17-10 with 6:26 left in the game. The offense looks to be firing on all cylinders with that drive.

-- Percy Harvin with his first catch of the game and it's a great one. One handed catch on a 17-yard gain. It's great to have him back. Wilson follows it with a bomb on the run to Zach Miller to put the Hawks on the Vikings 5.

-- Marshawn Lynch with a big run and hole gets the Seahawks out toward midfield.

-- Christian Ponder nails Wright for a 38-yard bomb to even things up, 10-10 with 11:28 left in the second quarter. You don't see many people get behind Richard Sherman like that.

2nd Quarter -- Man, CenturyLink is loud. Vikings do get a first down out to their 37.

--Touchdown Seahawks! A 4 yard Lynch run puts the Hawks up 10-3 at the end of the first quarter.

-- Wilson takes a shot, but completes a long pass to Doug Baldwin for the first down. The 44-yard pass gets the Hawks out to the Vikings 33. A Shotgun pass from Wilson to Lockette moves the Hawks to within 4.

-- Seahawks aren't able to get much of a running game going, either, loosing three yards so far.

-- Peterson only has seven carries and 15 yards. Vikings were forced to punt, and Seattle will take over on their own 22 yard line.

-- Percy Harvin checked into the game for the first time. Unfortunately, Russell Wilson took a sack and the Hawks were forced to punt.

-- Jermaine Kearse took a hard hit on the 18 yard line. He looks OK though.

-- Pass interference from Richard Sherman? That hardly looked like interference. As Dave Wyman of the Q13 FOX Sports post-game show says, some of these flags are getting a little ridiculous.

-- The Vikings are driving here, with a seven yard run and a first down from to the Seahawks 34.

-- The Hawks are really doing a good job of stopping Adrian Peterson, but the Vikings have made it into Seahawks territory.

-- Steven Hauschka leads the NFL in scoring this season. He nails a 50-yard field goal to put the Hawks up 3-0 with 11:25 left in the first quarter.

-- Lynch loses the ball, but the Hawks get it back. A rare fumble from Lynch pushes the Hawks to 2nd and 22.

-- Marshawn Lynch is handed the ball on the first play from scrimmage for the Hawks.

-- Fumble and the Hawks recover. Cliff Avril forces Christian Ponder to loose the ball at the Vikings 33-yard line. Not a bad way to start the game.

-- Adrian Peterson nearly broke one, but he was wrapped up by Earl Thomas after a six yard gain. He is something to watch, isn't he?

-- Kickoff! The Vikings run the ball out of the end-zone and out to the 30. On the first play of possession, the Hawks stop Adrian Peterson for a loss. It's already loud at CenturyLink.