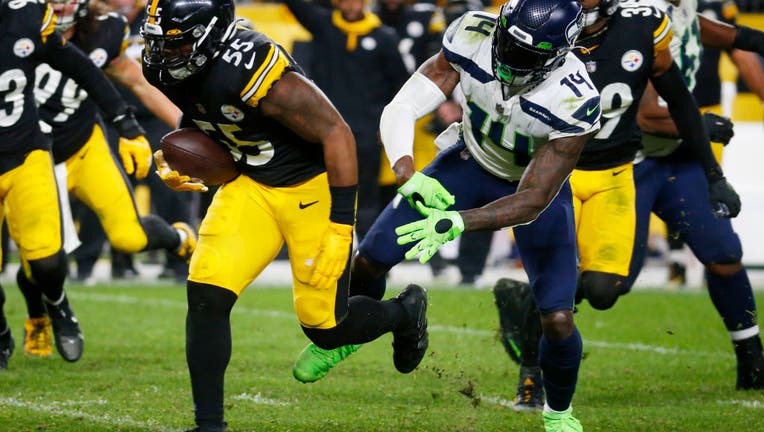 PITTSBURGH, PENNSYLVANIA - OCTOBER 17: Devin Bush #55 of the Pittsburgh Steelers rushes ahead of defender DK Metcalf #14 of the Seattle Seahawks at Heinz Field on October 17, 2021 in Pittsburgh, Pennsylvania. (Photo by Justin K. Aller/Getty Images)

RENTON, Wash. - The performance was full of grit and resiliency, the type of characteristics Pete Carroll strives to see from each of his teams.

And yet, it still ended up with another notch in the loss column leaving the Seattle Seahawks sitting at 2-4 and in last place in the toughest division in the NFL.

That’s difficult for Carroll to reconcile. He was immensely proud of the effort given by the Seahawks in Sunday’s 23-20 overtime loss to Pittsburgh, rallying from a 14-0 halftime deficit and overcoming a number of injuries in the first game without Russell Wilson at quarterback.

But then there were the mistakes that eventually ended with Wilson’s replacement, Geno Smith, turning the ball over for a second straight week with the chance at a game-winning drive.

Smith wore the blame afterward, but his fumble deep in Seattle territory in overtime only amplified the Seahawks current situation. They’re not talented or healthy enough at this time to overcome mistakes and stay a contender in their division.

Smith is shouldering the blame and he should take some. He took a sack on Seattle’s first overtime possession that ended any hopes of a field-goal attempt and then didn’t have good ball security when hit and stripped by T.J. Watt on Seattle’s final offensive play.

But Smith is a backup for a reason and those around him needed to help their quarterback far more. That starts at the top with Carroll and offensive coordinator Shane Waldron, who put Seattle in a 14-0 halftime hole with an unproductive offensive plan that was scraped at halftime.

And while Seattle’s defense played better than it has in weeks, missed opportunities were still abound. None may linger more than Jamal Adams having a potential interception hit him in the facemask in the closing minutes of regulation.

The shift Seattle made at halftime was significant. At least while Wilson is sidelined it seems the Seahawks are going back to being more of a ball control offense predicated on running the ball with a little of what Waldron brought from his time with the Rams sprinkled in.

Seattle rushed for 126 yards in the second half and overtime. That was more than the Seahawks had rushed for in four of their first five games to start the season. Seattle also controlled time of possession and had 15 first downs versus just three in the first half.

It’s a return to how Carroll has always wanted to play. And the success against the Steelers, while playing with a backup quarterback, only lends itself to be the approach Seattle will take moving forward.

"I think it was a good turn for us," Carroll said. "I think some really good things happened last night in that regard."

Seattle’s pass rush was mostly invisible against the Steelers. The Seahawks had no individual sacks and only one quarterback hit. Part of that was Pittsburgh’s system of getting the ball out quickly, but there were times Ben Roethlisberger took deep drops and Seattle wasn’t able to get there.

The one rusher showing the most promise was Darrell Taylor prior to his neck injury in the fourth quarter. Carroll said all the tests have come back clear on Taylor and he could be cleared to play this week.

It seems any Seahawks running back will have an increased role in the coming weeks. On Sunday it was Alex Collins becoming the first 100-yard rusher for Seattle since December 2019.

Collins came out of the game with a hip issue that could have his availability in doubt this week, but Seattle expects to have 2018 first-round pick Rashaad Penny coming off injured reserve and able to be full go against New Orleans.

Carlos Dunlap continues to be absent from the stat sheet. Dunlap played 39 defensive snaps and failed to have a defensive statistic. No tackles, no sacks, no QB hits. He’s played in five of Seattle’s six games and has zero sacks, two quarterback hits and six tackles.

Dunlap is being used in different ways than a season ago when his arrival sparked improvement in the pass rush. But the Seahawks didn’t give Dunlap $8.5 million guaranteed this offseason for that lack of production so far.

The two most notable were Collins and Taylor. Starting left guard Damien Lewis also has a shoulder injury.

3 — Seattle has lost its past three overtime games, including twice this season after losing 33-27 in OT at home in Week 2 against Tennessee. Seattle is 2-6-1 in its past nine overtime games going back to the start of the 2015 season.

Seattle’s hopes of remaining relevant in the NFC playoff race could come down to next Monday’s matchup with New Orleans. Win their next two games, both at home, and the Seahawks would go into the bye week at 4-4 and await further clarity on when their starting quarterback may be able to return.