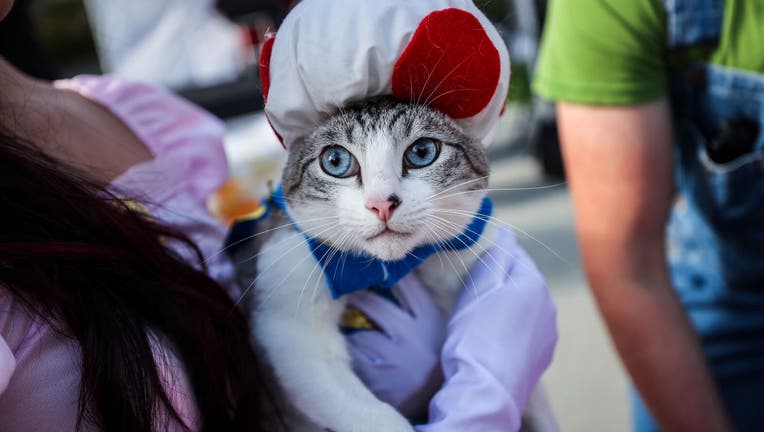 File: A cat is seen in a Halloween costume participates the Sunnyvale Pet Parade contest in Sunnyvale, California, United States on October 30, 2022. (Photo by Tayfun Coskun/Anadolu Agency via Getty Images)

LOS ANGELES - There’s now a solution for cat enthusiasts who've longed to love on some furry loaves but couldn't due to allergies.

In the past, people with cat allergies could expect stuffy noses, sneezing, scratchy throats and even trouble breathing. But now, scientists at UCLA say they’ve tested a new form of treatment that might allow people to tolerate symptoms of cat allergies.

A research team led by Dr. Jon Corren of UCLA tested their experimental shot on 121 adult patients aged 18 to 65, all of whom had a history of cat allergies.

They hoped to stop these allergic reactions by using an antibody called tezepelumab which they said blocks the cells from signaling the body’s immune system to react to the unwanted odors and fibers that come from cats which trigger an allergic reaction.

Why pets are so scared of fireworks

While humans come to expect fireworks on Independence Day, they come without warning for a cat or dog.

After a year, researchers found that those who received a combined therapy of tezepelumab and regular cat allergy shots had maintained resistance against allergic reactions.

These findings suggest that combination therapy could enhance the effectiveness of average cat allergy shots.

"People with chronic allergy symptoms may suffer from reduced productivity and quality of life," says Dr. Anthony S. Fauci, director of NIH’s National Institute of Allergy and Infectious Diseases. "Developing allergen immunotherapy regimens that work better and more quickly than those currently available would provide much-needed relief for many people."