SEATTLE-- Scientists are monitoring swarms of tiny earthquakes in the last few weeks, happening right here under our feet in the Northwest. The thousands of slow motion quakes started up near Vancouver Island a few weeks ago and have been migrating further south, now centered around Olympia. These are far too small to be felt by humans or cause damage. But, it raises questions about whether these tremors are signaling a bigger quake on the way. 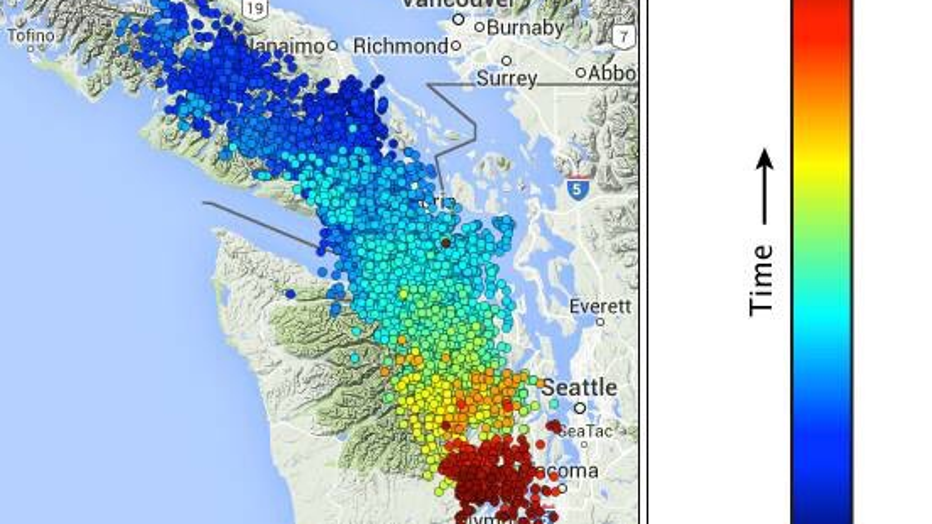 Pacific NW Seismic Network map shows the recent swarms of quakes. The oldest ones, shown in blue, are up north on Vancouver Island. The most recent ones are clustering around Olympia.

Here's the setup for what's going on: the Earth's crust is broken up into irregular pieces called tectonic plates and these plates are always moving, but only a few millimeters per year. Where these meet and grind against one another is where we most often see earthquakes. In Western Washington, we live on the North American plate and the Juan de Fuca plate is diving underneath. The area is called a subduction zone-- and that's where these thousands of tiny tremors are taking place. When you plot them on a map, they look pretty impressive.  These slow motion quakes are called "slow slip" quakes and they happen around the region about every 14 months.

The Juan de Fuca plate is diving underneath the North American plate in a process called subduction. Courtesy: USGS

"We don't really know if these slow events set off a big earthquake," says John Vindale. He is the director of the Pacific Northwest Seismic Network in Seattle. He says of all the dozen or so places that have these swarming "slow slip" quakes, we know the most about their behavior here in the Northwest and in Japan. "Everything we see suggests there is no danger at the moment ."

That can bring some comfort for a region that scientists say is long overdue for a really big earthquake. But, "the big one" would not likely come from the same source as these swarming quakes. The "slow slip" quakes are occurring on a hot and very deep part of the fault line where the plate boundary is more molten in nature. Scientists think the rocks at this depth flow more fluidly against one another. The "big one" would likely come from the other side of the Juan de Fuca plate, near the feature called the Juan de Fuca ridge. That's where the Juan de Fuca plate is locked up with the Pacific plate-- and stress has been building for more than 300 years.

Today is the anniversary of the last giant quake in the Northwest. On January 26th, 1700 the Northwest was rocked by a huge 9.0 earthquake and sent a deadly tsunami racing across the Pacific Ocean hitting unsuspecting people on the Japanese coastline 316 years ago.