Researchers vacuumed out approximately 98 'murder' hornets from a nest in Blaine this past weekend. Officials spoke about the process of removing the hornets on Monday.

BLAINE, Wash. - Scientists removed 98 so-called murder hornets from a nest discovered near the Canadian border in Washington state over the weekend, including 13 that were captured live in a net, the state Department of Agriculture said Monday.

Entomologists vacuumed out 85 hornets and collected another 13 live hornets with a net. The nest is no longer a threat to honeybees in the area, but entomologists say this is only the start of their work and they suspect there may be more nests in Whatcom County.

Managing entomologist Sven-Erik Spichiger says he believes there are at least 2 more nests.

"The eradication went very smoothly,″ managing entomologist Sven Spichiger said in a press release. "This is only the start of our work to hopefully prevent the Asian giant hornet from gaining a foothold in the Pacific Northwest.

"We suspect there may be more nests in Whatcom County,″ Spichiger said.

Saturday’s operation began at about 5:30 a.m. with the team donning protective suits and setting up scaffolding around the tree so they could reach the opening of the nest, which was about 10 feet high. The team stuffed dense foam padding into a crevice above and below the nest entrance and wrapped the tree with cellophane, leaving just a single opening. This is where the team inserted a vacuum hose to remove the hornets from the nest.

Team members used a wooden board to whack the tree to encourage hornets to leave the nest, the agency said.

When the hornets stopped coming out of the nest, the team pumped carbon dioxide into the tree to kill or anesthetize any remaining hornets. They then sealed the tree with spray foam, wrapped it again with cellophane, and finally placed traps nearby to catch any potential survivors or hornets who may have been away during the operation and returned to the tree. The work was completed by 9 a.m. 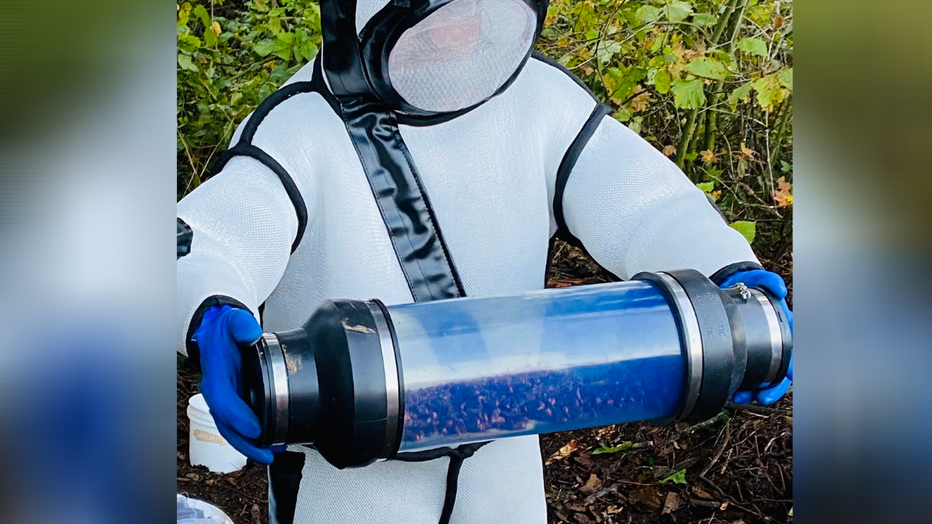 Fortunately no one was hurt in the operation. Spichiger credits the chilly weather on Saturday for keeping the hornets docile during eradication.

WSDA has been actively searching for Asian giant hornet nests since the first hornets were caught earlier this year. The first confirmed detection of an Asian giant hornet in Washington was made in December 2019 and the first hornet was trapped in July of this year. Several more were subsequently caught, all in Whatcom County, which is in the northwestern corner of the state along the Canadian border.

Entomologists will now try to determine whether the nest had begun to produce new queens. Crews will continue setting traps through at least November in hopes of catching any more Asian giant hornets still in Whatcom County.

WSDA commends the public for reporting Asian giant hornet sightings and setting up traps. In the coming weeks, the state's pest program team will investigate whether the nest had begun to produce new queens or not. The operation is a major breakthrough in learning more about the invasive species.

Spichiger says the captured hornets will be used for research for the first time in the United States. Entomologist will continue to set up traps through at least November in Whatcom County.WSDA says every report leads the agency closer to finding a nest so it's critical to report sightings.

There are 3 ways to report them: