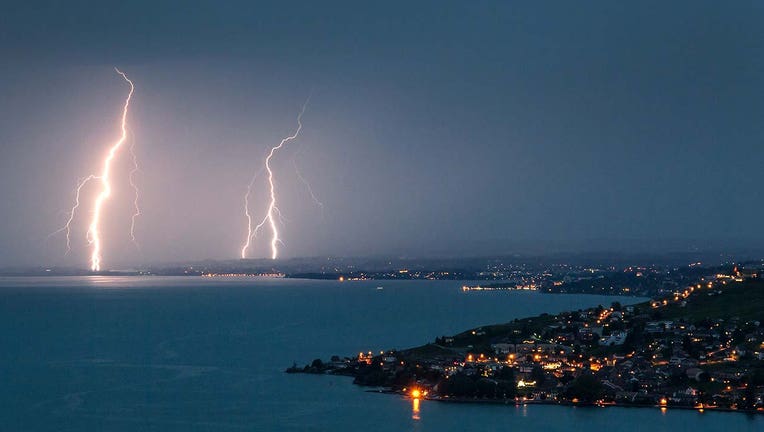 Lightning illuminates the night sky over the village of Cully surrounded by the vineyard terraces of Lavaux on the bank of Leman Lake from Chexbres on late July 30, 2017. / AFP PHOTO / Fabrice COFFRINI (Photo credit should read FABRICE COFFRINI/AFP v

A group of scientists said they were able to guide lightning bolts using laser technology for the first time.

The authors said that they believe their experiment would lead to progress in lightning protection and lightning physics.

The demonstration was conducted on Säntis mountain in Switzerland during the summer of 2021.

Using a high-repetition-rate terawatt laser, the equipment was set up next to a telecommunication tower that is one of Europe's structures most affected by lightning.

The laser was activated every time storm activity was forecast between June and September and the area had to be closed to air traffic in advance.

Intense laser pulses, at 1,000 times per second, were fired at thunderclouds to redirect lightning strikes.

There are several myths floating around that many believe to be absolutely true, but here's what the facts say about those myths.

The tower was hit by at least 16 lightning flashes, four of which occurred during laser activity. All four strikes were intercepted.

The device is the size of a large car, weighing more than three tons.

With the University of Geneva scientists also playing a key role, the experiments were conducted in collaboration with aerospace company ArianeGroup.

Cameras atop a communications tower at the St. John the Baptist Parish Sheriff's Office in Louisiana were able to capture a stunning image of a bolt of lightning that struck a parking lot on Wednesday. (Credit: Facebook.com/StJohnParishSheriff / FOX Weather)

This concept, which was first proposed in the 1970s, has worked in laboratory conditions, but not in the field until now.

The university said in a release that it took nearly a year to analyze the data that was collected, resulting in the determination that the laser could guide lightning effectively.

"The data analysis also demonstrates that the [Lightning Laser Rod (LLR)], unlike other lasers, works even in difficult weather conditions – such as fog (often found at the summit of Säntis), which can stop the beam – since it literally pierces the clouds," the university said.

RELATED: Lightning report: 2022 was a ‘year of extremes,’ with most US strikes in Texas

The next step is to increase the height of the laser's action even further, with the long-term objective to use the LLR to extend a 10-meter lightning rod by 500 meters.

"This work paves the way for new atmospheric applications of ultrashort lasers and represents an important step forward in the development of a laser-based lightning protection for airports, launchpads or large infrastructures," the authors added.

Reuters contributed to this report.

Find more updates on this story at FOXNews.com.