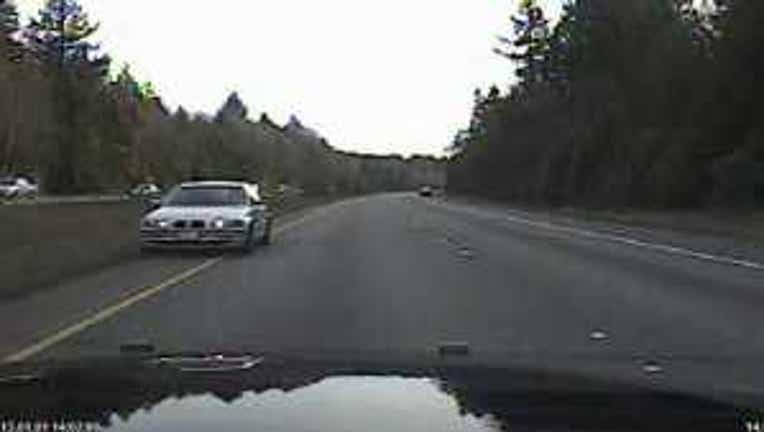 A screen grab from the police officer's dash cam shows the BMW speeding toward him, head-on, on Highway 16.

GIG HARBOR -- A man with Alzheimer’s got behind the wheel of a car and started driving down the wrong way on State Route 16 near Gig Harbor.

Police officers eventually stopped him. It happened on New Year's Day, but the amazing dash cam of the incident is just making the rounds.

Gig Harbor police officer Joseph Hicks, when he when he finally caught up to the silver BMW, parked his cruiser in the left lane of the highway and watched as the car came at him head-on at 60 mph.

Despite the sirens and lights, the driver just kept going and used the shoulder to pass Hicks, who doubled back, passed the BMW and stopped in front of it.

The 81-year-old driver said he was taking a ride to the bank, not knowing he had driven for miles into oncoming traffic.

The most common form of dementia is Alzheimer’s -- a progressive, degenerative disease that affects the way sufferers think and their ability to reason.

Police say the man's license had recently been taken away for medical reasons. And making matters worse, police reports show he'd been drinking, with a blood-alcohol level of 1.0, higher than the driving limit of 0.8.

"The gentleman probably did not understand he was doing something wrong. I doubt he realized that his driver's license had been suspended or taken away, I doubt he recognized that the alcohol played a role in what was going on,” said  Joanne Maher, director of programs for the Alzheimer's Association.

No one was hurt that day, but Maher said cases like that are common. That’s why early detection and planning are key to living with someone with the disease.

"There are a lot of other safety issues out there, like guns in the house or using power tools, cutting the grass. It's a matter of deciding when the person is no longer capable of doing it, but they may not understand it themselves," Maher said.

In this case, it seems the man's wife is having trouble controlling him, and the Alzheimer's Association said that's very common. Caring for someone with this disease can take an extreme toll on the caregiver, Maher said.

For more information on Alzheimer’s, go to this link http://www.alz.org/alzwa/