SEATTLE — Seattle City Councilwoman-elect Kshama Sawant made her intentions loud and clear at a news conference Tuesday morning: “2014 will be the year of $15-an-hour minimum wage in Seattle.” 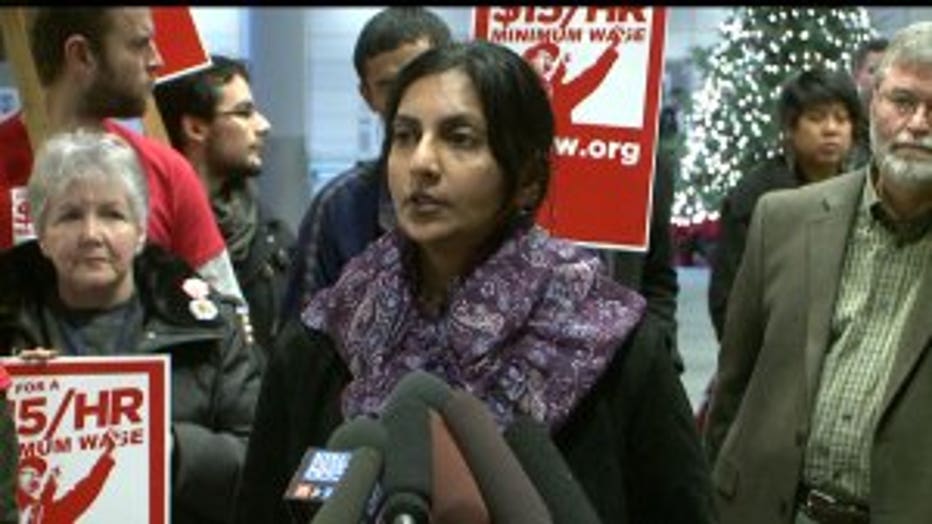 Striving toward one her primary campaign tenants,  Sawant, the first popularly elected socialist candidate in the council in more  than 100 years, said she would push the council — and if necessary voters — hard  to mandate a $15-an-hour minimum wage for workers in Seattle.

Sawant announced plans for a website where volunteers could sign up to  support the cause, and urged those in the community to get involved. She said  the complete plans for how to implement a new minimum wage were not worked out,  but would be “all inclusive” in an effort to help small businesses, workers and  the city.

“Now is the time to stand up,” Sawant said. “We need this as quickly as  possible.”

Other Seattle City Council members didn't want to comment on Sawant's plan, and neither did Mayor-elect Ed Murray, though he is planning to announce his own ideas about a $15-an-hour wage. He will talk about those ideas on Thursday, but in the past Murray has said he would like to phase the minimum wage increase in over his first four years in office.

"Tens of thousands of workers have to put food on the table today, and they have to pay their rent every month," said Sawant. "As long as they don't have the freedom to tell their landlords that they can wait for four years, we can't wait for four years."

In SeaTac, where $15-an-hour was recently passed by voters, opponents of the measure contend there will be layoffs and shutdowns at businesses around that area. Some Seattle employers are worried about what would happen in Washington's biggest city if the minimum wage increases by that much. The current minimum wage is $9.19, the highest of any U.S. state. Among city workers, those in Sonoma, Calif., enjoy the highest rate, at $15.38 an hour.

In her news conference, Sawant admitted some jobs could be lost, but said, "If we don't fight for this, then the race to the bottom will continue."