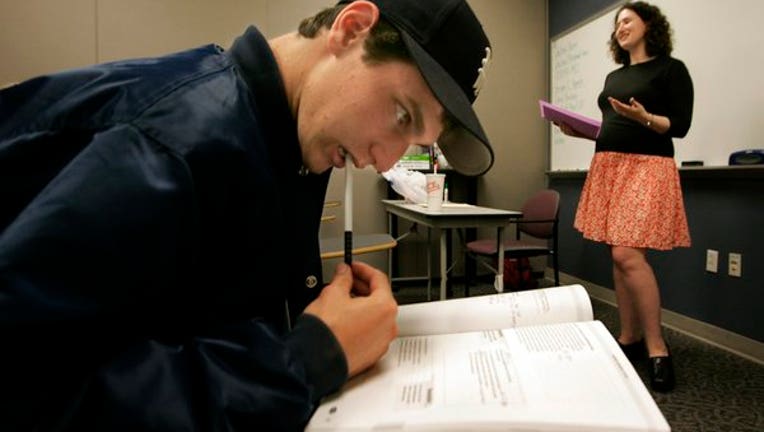 LOS ANGELES -- As part of a major overhaul of the SAT college entrance exam, test-takers starting in 2016 will no longer be required to write an essay, the College Board announced Wednesday.


However, an essay-writing test still will be offered, and many colleges may demand that applicants take it and submit the score.

With that change, the main SAT will be condensed to two sections from the current three, and the top possible score will be 1,600, as it was for many decades.

The current 2,400-point maximum was introduced with the start of the required essay seven years ago. The new optional essay test will be graded separately on a scale that is still under consideration, said officials of the College Board, which owns the widely used exam.

Those shifts, officials said, are part of a wider effort to better align the exam with what students learn in high school and will need in college -- and away from the advantages they may gain from expensive private tutoring.

For example, the revised sections in reading will drop their most obscure vocabulary words and instead “focus on words students will use over and over again,” said College Board President David Coleman. The math problems will be less theoretical and more linked to real-life questions.

“While we build on the best of the past, we commit today that the redesigned SAT will be more focused and useful, more clear and open than ever before,” Coleman said at a meeting in Austin, Texas, that was broadcast on the Internet.

Although the test sponsors long had argued that coaching does not help students significantly, Coleman acknowledged that many people believe students who can afford tutoring have an advantage.

“It is time for the College Board to say in a clear voice that the culture and practice of costly test preparation that has arisen around admission exams drives the perception of inequality and injustice in our country,” he said.

To help address that issue, the College Board is starting a partnership with the online Khan Academy to offer a free series of practice exams and videos about good test-taking practices. The Silicon Valley-based Khan Academy has become one of the most popular online-education sites, particularly for its math offerings.

Analysts said the steps arise from the College Board’s self-interest as well as the public interest.

Two years ago, the rival ACT -- which most colleges also accept -- surpassed the SAT in the number of test takers across the nation. About 1.6 million students took the SAT last year, and more than 1.7 million took the ACT, with some taking both as insurance.

In some ways, the new SAT will become more like the ACT, which has an optional writing section that many colleges require. The SAT also will switch to the ACT model of grading, in which only correct answers are counted and students are not dinged for wrong ones.

The College Board has faced criticism for many years that the SAT is not fair to some low-income and minority students and that high school grades are a much better predictor of how well an applicant will do in college.

As a result, some colleges have eliminated the need for any exam at all. The new exam appears to be a more populist version, more connected to the new Common Core teaching standards adopted by many states. And if students decide to skip the essay, they will take a less time-consuming exam: three hours instead of the current three hours and 45 minutes.

The dropping of the essay requirement will pose a dilemma for many colleges, especially for the University of California system, which is the single-largest customer of the SAT. UC administrators 10 years ago pushed and won a previous set of reforms in the SAT, including the addition of the essay, which is a 25-minute, handwritten exercise at the exam’s start.

Stephen Handel, the UC system’s associate vice president for undergraduate admissions, said it was too soon to say whether UC will continue to require the essay. Such a decision would be made by a special faculty committee that handles admissions standards and by the UC regents, he said.

But he and other UC administrators noted that the system's application requires essays and that the SAT writing sample is just one part of a much wider portfolio of grades and personal achievements. The SAT essay, he said, “has a place, but a limited place.”

Coleman said Wednesday that college admissions officers were divided over the value of the essay in helping to choose a freshman class. While defending the exam’s overall ability to help predict college success, he said that “one essay alone historically has not contributed significantly to the overall predictive power of the exam.”

The new optional essay will be more closely linked to the texts presented to students, requiring more analysis based on evidence and citations to material in the question prompt and less riffing on personal opinions and possibly untruthful narratives, officials said.

However, some experts said making the essay optional sends a bad and perplexing message.

“I’m not sure it is a good signal to kids in schools about the importance of writing,” said Katy Murphy, president of the National Assn. for College Admission Counseling. The change also will confuse high school seniors who may not have access to good counseling and may be unsure how to fulfill testing requirements that will vary among colleges, said Murphy, who is director of college counseling at Bellarmine College Preparatory high school in San Jose.

In one area, the College Board will be making it potentially more difficult for students. Now test takers are allowed to use calculators throughout the math questions. But starting in two years, calculators will be banned during some of the math testing to better assess students’ “understanding, fluency and technique,” the announcement said. Another change will be that the SAT will start to be offered online as well as in the traditional paper form.