Charles Graves, a rare, professional deaf Santa from Texas, visited the Gaylord National Resort in Fort Washington, Maryland, on Dec. 12. Video shared by the resort showed Santa interacting with children and their families using American Sign Language, as well as interpreters at the resorts holiday shows.

"Often children who are deaf cannot fully interact with Santa and enjoy the holiday festivities," an event spokesperson from Gaylord National Resort told Storyful. "The Washington, DC region has one of the highest concentrations of deaf and hard of hearing people in the nation."

There are more than 20,000 residents in Washington, D.C. alone who are deaf or hard of hearing, many of whom use ASL as their primary language, according to government data. One reason for this may be Gallaudet Univerisity, which is also located in D.C. and bills itself as the world’s only liberal arts college designed to be "barrier-free for deaf and hard of hearing students," as noted by DCist. 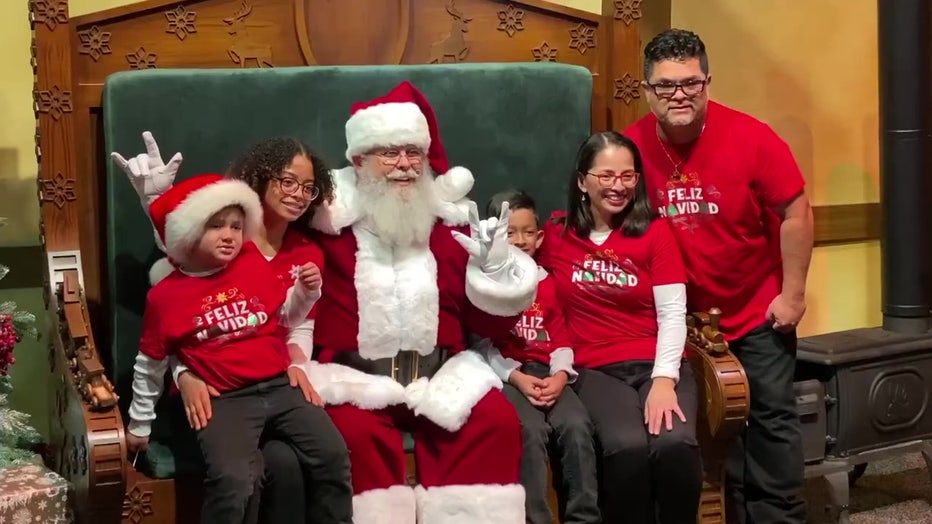 For his part, Graves recently told the Associated Press through an interpreter that he was inspired to grow his beard and put on the Santa suit in part by awkward encounters with hearing Santas as a child.

"As a child, I was very excited to receive a gift, but then you just kind of go away and you’re like, there’s no connection there. Children look at me now and they’re like, wow, you know, there’s a connection there with the deaf culture. And I can always connect with the hearing kids as well," Graves explained.

Graves, who has a day job at a school for deaf children, also received training to be Kris Kringle and now works as Santa with interpreters.

He said breaking in has been difficult and expensive, but "this is something really, really important to me."

By mid-November, he had more than a dozen gigs, including a parade in Santa Paula, California, a mall in Austin, Texas, and at Morgan’s Wonderland, a nonprofit accessible theme park in San Antonio — as well as several Zoom visits. According to the Associated Press, this part of a growing trend for more inclusive Santas performers.

About two to three out of every 1,000 children in the U.S. are born with a detectable level of hearing loss in one or both ears, according to data shared by the National Institute of Deafness and Other Communication Disorders.

During their visit with Santa at Gaylord National Resort, many kids lined up to see the man in the red suit.

"[I told him] I want some new Vans shoes," Ramon Torres Morán, 8, told DCist through a translator. "I want a couple of Goosebumps books. And… a Rubik’s Cube. And I want a really hard one, not just one of the regular squares. A really complicated one."