Reaction to 5.1 earthquake in the South Bay

Many people who work in high rise buildings said they felt the shaking from today's quake in the South Bay for roughly 45 seconds to one minute. Ashley Shannon works on the 15th floor of a high rise at a law firm and said she had vertigo for a bit afterwards.

SAN JOSE, Calif., - A 5.1 magnitude earthquake shook the Bay Area on Tuesday just past 11:40 a.m. according to the U.S. Geological Survey.

The epicenter was just east of Seven Trees, a neighborhood of San Jose, California. It was centered along the Calaveras Fault and was described as a "moderate earthquake" by Richard Allen, the director of the Berkeley Seismological Laboratory.

The jolt was felt from San Francisco to Santa Cruz.

People across the Bay Area felt a jolt from the 5.1 magnitude earthquake.

"We got outside as fast as we could because we live in an older house," said Mariah Hernandez, a Seven Trees resident. "It was just scary, I was just thinking 'here it is, this is the big one."

A man who lives on the 10th floor of a San Jose high rise told KTVU his building was swaying for a long time.

"We were rocking back and forth like an inflatable tube man," said the man. "It was out of control."

Many people who work in high rise buildings said they felt the shaking for roughly 45 seconds to 1 minute. Ashley Shannon works on the 15th floor of a high rise at a law firm and said she had vertigo for a bit after the quake.

"I was luckily already in a doorway," Shannon said. "I knew it was the safest place to be. I just didn’t move." 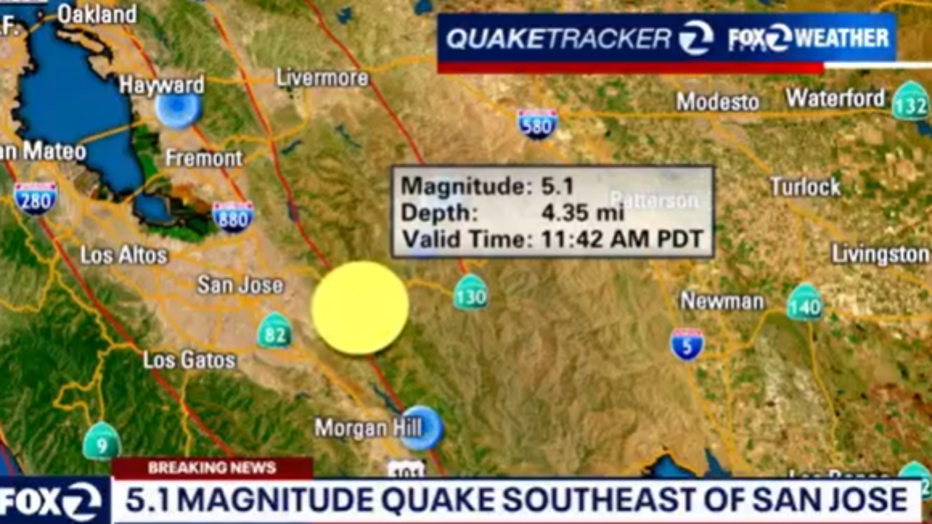 Harsha Khurula and Umang Barot are students at Northeastern University in San Jose. They are originally from India and said they had never experienced an earthquake before.

"I did not know how to react to it," Khurula said. "The only thing I could do is run because everyone started evacuating the building and the security guard said, hey you gotta move."

"Yes, it was my first experience," Barot said. "I do not want to experience it again."

No damage or injuries have been reported. Still, it was the largest earthquake in the Bay Area since a 6.0-magnitude earthquake was centered in Napa County in 2014.

SEE ALSO: California earthquake alerts: how to get notified before a quake

As a result of the quake, BART held trains for 5 minutes and will conduct inspections to ensure no damage was done to the tracks. The VTA also delayed its trains.

The San Jose fire department said that it had not received any emergency calls in the aftermath of the quake. KTVU checked with multiple businesses where you’d expect to find some damage after a 5.1 quake, places such as grocery and convenience stores, and liquor stores. But, no damage was found.

This story is developing, KTVU will update it as new information is made available.