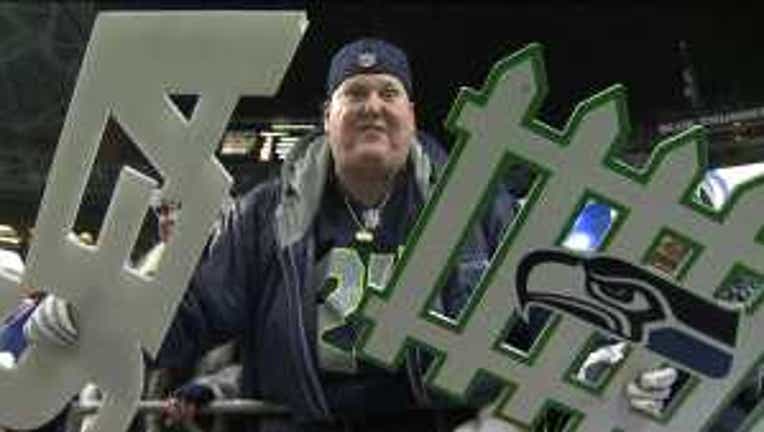 SAN FRANCISCO -- C.W. Nevius, a reporter and columnist for the San Francisco Chronicle, posted a column on his newspaper's blog in which he took at shot at the 12th Man in advance of the game Sunday with the 49ers.

His column is being posted on this website with his permission. In granting permission, he jokingly asked in an email if we could provide him with "personal security."

So the question is: Who is more annoying, the Seattle Seahawks’ players or their fans?

I’m going to go with the fans.

The players, frankly, go out of their way to be annoying. They chirp, they chatter, and they push and shove after the whistle. But that’s not an accident. That’s a strategy. They know what they’re doing

It’s the fans, bedecked in green face paint, screaming nonstop, waving flags and throwing Skittles on the field, who are way over the top. Honestly, it makes them look foolish and kind of unhinged. Folks, is that really how you want to present yourself to a national television audience?

And it isn’t as if I don’t like Seattle or am personally offended. We’ve had some nice visits, like the city, and the people are usually very friendly. In fact, it is probably the urban area closest to San Francisco in look and feel. It’s the whole lack of perspective by the fans that’s off-putting.

Like the idea of refusing to sell tickets to this weekend’s NFC Championship game against the 49ers to anyone in California. C’mon. Everyone knows there were hardly any over-the-counter tickets available in the first place. And everyone also knows (spoiler alert) that if you really want tickets there are two things to keep in mind. First, you’re going to have to buy them from a resale service, and second, they are going to cost about as much as a weekend in Carmel. Personally, I’d go to Carmel, watch the game on TV and then take a walk on the beach, but you can do what you want.

And yes, we know that Seattle is a difficult place to play because the fans literally make earth-shaking noise in the stadium. Wonderful fodder for off-day sports stories and all that, but I’d say — just to pick a couple of things at random — the play of the offensive lines and the number of turnovers will be way more important.

Of course, we have 49ers’ fans who do the whole “My guys, the Niners.” To which we say: Dude, you didn’t make any tackles or catch any passes. You just bought a jersey. Seattle doesn’t have a monopoly on annoying fans.

I lived in Colorado for years, and this reminds me of the old Denver Broncomania. If you heard enough of the fans’ hometown grandstanding, it started to sound like a city with an inferiority complex. Nobody respects us, the big markets look down on us and if our hired football players beat yours it means … we’re important, I guess. That was their logic, at least.

That super boosterism comes up in plenty of places. One year I covered a Monday night football game in Green Bay. Before the game a couple of us walked around the field. I remember two things about that experience. First, the announcement that there would be a drawing for a snow blower at halftime, and second, the fact that the fans could never drop the us-against-you act and talk to us.

We were asking about the team, the weather, Green Bay, trying to make conversation. We made several attempts, with several different groups and it always ended the same way — “You’re going down, San Francisco. We’re going to kick your butt.”

Somebody finally said to one of the guys, “You realize we don’t play for the team? We’re just here to see the game.”

I get that Seattle-San Francisco has become a rivalry. And I’m looking forward to watching. It might be epic. But the face-painting, the costumes and the screaming isn’t classy, it’s just kind of silly. And believe us. We know silly costumes. We have the Raiders. It hasn’t helped them win many games.

Back to the question of the players. As for the Seahawks’ smugness that is their coach, Pete Carroll, don’t you get the impression that they are going out of their way to get our attention? Do you really think that mouthy defensive back Richard Sherman says at some point: “Oh gosh, I didn’t realize what I said was going to be so controversial.”

What I would really like to see is if taking a few cheap shots during a game actually hurts a team’s win-loss record. I know we’re supposed to say it does, and that well-disciplined, poised teams always have the advantage.

But I’m not convinced. Forty-Niner fans crowed about how the Carolina Panthers lost their composure last week, but watching Anquan Boldin trash talk and head-butt a defender kind of hurts the attempt to take the higher ground. Frankly, the 49ers and Seahawks may be chippy at times, but they may also be the two best teams in the league. It doesn’t look like it has hurt them.

So I refuse to take the bait with the Seattle players. They’re just trying to get a reaction. They know what they are doing.