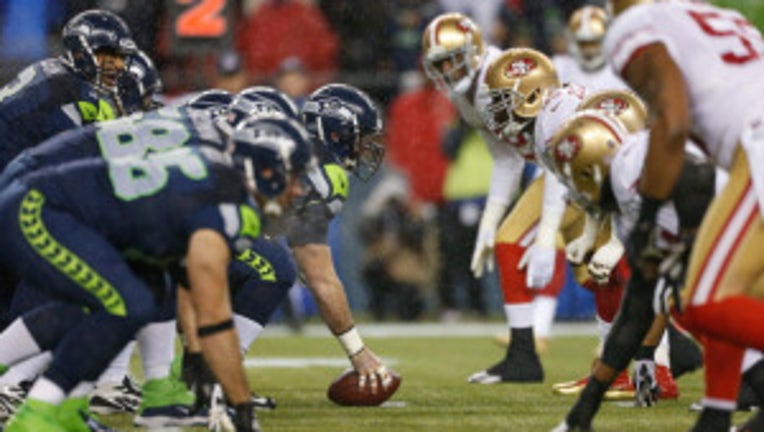 CHARLOTTE -- Could it get anymore dramatic? The Seahawks will face the 49ers next weekend in the NFC Championship Game at CenturyLink Field.

The San Francisco 49ers beat the Carolina Panthers 23-10 Sunday in Carolina, cementing their ticket to Seattle next weekend. The game will be broadcast on Q13 FOX at 3:30 p.m. Sunday.

The division rivals faced twice this season, with the Seahawks beating the 49ers 29-3 at home in September, and the 49ers coming on top 19-17 in December.

The Hawks have outscored the 49ers 71-16 in the last two match-ups at home. However, 49ers quarterback Colin Kaepernick said his team is much improved and ready to face the Hawks and the 12th Man.

"We're a different team than the first time we played them out there," Kaepernick said after the game. "We have a lot of key play-makers back.

Games between the two teams are often chippy, physical affairs. The rivalry has heated up in recent weeks, with Hawks fans even going as far to boycott Beats by Dre headphones, a company Kaepernick supports.

Kaepernick has thrown four interceptions and one touchdown in his past two games in Seattle. But the third year quarterback has already won two games on the road this postseason.

-- Cam Newton throws a pick to number 31. Looks like the Seahawks will be playing the 49ers.

-- Newton is driving here in the fourth quarter, but there's not much time left. Time is running off the clock pretty quick.

-- On Third and 1, Frank Gore goes 39 yards for the first down in Panthers territory.

-- Newton gets sacked in back-to-back attempts and the Panthers are forced to punt the ball late in the third quarter. The 49ers are still up by two scores, and these drives are taking a lot of time off the clock.

-- Kolin Kaepernick goes 45 years on a bomb to Boldin. On first and goal, Gore drops the ball and the 49ers pick it up. Fortunate not to turn the ball over. Kaepernick gets a 4-yard touchdown run to put San Francisco up 20-10 with 8:53 left in the 3rd Quarter. Good first possession for the 49ers.

-- Carolina gets the ball on the 20 to start the second half. San Francisco got away with a penalty to end the first half. That may come out if San Francisco comes out on top.

-- San Francisco goes on top 13-10 after some dispute. Five seconds left in the 2nd quarter. Looks like the 49ers will go into the locker room with a lead.

-- First and goal just inside the 10. More injuries for Carolina, as their safety goes down. On Third and goal, the 49ers get a flag in the endzone. The 49ers get the ball on the 1.. And the clock keeps running... great end to the first half as Harbaugh comes running out and gets an unsportsmanlike conduct.

-- Kaepernick is on point in this drive. A great pass to Michael Crabtree for 20 yards to take it to the Carolina 29.

-- 49ers defense holds strong on the goal line for the second time this game. The Panthers have to settle for a field goal, and lead the 49ers 10-6 with 4:43 left in the first half.

-- Cam has six carries for 43 yards. He's looked on it today. The Panthers might be getting hot at just the right time. Greg Olson goes 35-yards go Gregg Olson. His passing is precision.

-- San Francisco has struggled getting first downs after their first few drives. Lets see if Carolina can't string together another drive. I'm starting to root for Carolina here, as much as it would be nice to see the 49ers come in and we beat them.

-- The 49ers have to punt from the back of their endzone. Teddy Ginn has a 24 yard return on the punt. More great field position for Carolina. And Newton goes long to Steve Smith, 31 yards for the touchdown. Carolina leads the 49ers 7-6 with 12:40 left in the 2nd Quarter. That was Cam Newton's first career playoff touchdown.

-- The Panthers and "Riverboat Ron" go for it on fourth and goal from the 1-yard line, but they don't get it in. San Francisco takes over on their own 1 yard line.

-- As Sports Director Aaron Levine said, "Never root for injuries, but I wouldn't mind seeing these guys beat up on each other a little bit."

-- Second personal foul on Carolina. They have 3 penalties for 35 yards so far. The game is fairly chippy. The 49ers have the second most points off turnovers in the regular season.

-- Cam Newton throws a pick. In his first playoff game, an early interception can really rattle. Lets see how he answers.

-- Cam Newton takes over on his own 20. They start off with a three yard running play. Newton seems like a more calculated, precision like quarterback than Kaepernick.

-- Kaepernick goes down on a delayed blitz for his first sack of the game. Phil Dawson nails a 49-yard field goal to put the 49ers up 3-0 with 9:12 left in the first quarter.

-- We're seeing some costly penalties by Carolina. Where is that Carolina defense we've heard so much about?

-- A lot of injuries so far in this game. Crabtree is down. Tukuafu looks like he has a horrible injury. Thoughts about this being a tough, beat-them-up game were certainly right.

-- Frank Gore, San Francisco's strongest runner, gets popped on the opening play of the game, and the 49ers lose one.