The war is now in its fourth week. Russian troops have failed to take Kyiv — a major objective in their hopes of forcing a settlement or dictating Ukraine's future political alignments — but have wreaked havoc and devastation.

The U.N. migration agency says the fighting has displaced nearly 6.5 million people inside Ukraine, on top of the 3.2 million refugees who have already fled the country. Ukraine says thousands have been killed. 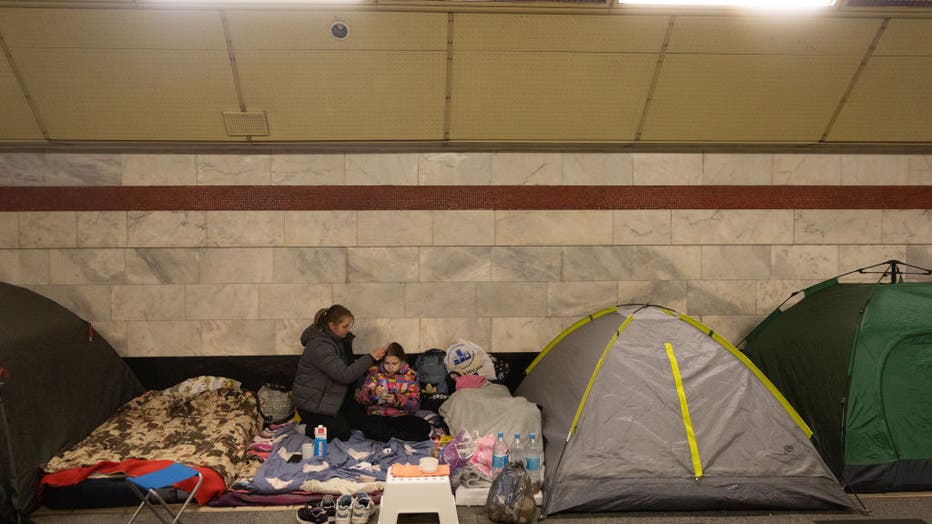 What is happening on the ground?

On Friday, missiles and shelling struck the edges of Kyiv, and a barrage of missiles were launched against an aircraft repair installation at an airport outside the western city of Lviv, close to the border with Poland. One person was reported killed in the Lviv attack.

Ukraine said it had shot down two of six missiles launched in the attack from the Black Sea. The early morning strike was the closest strike yet to the center of Lviv, which has become a crossroads for people fleeing from other parts of Ukraine and for others entering to deliver aid or join the fight.

In city after city around Ukraine, hospitals, schools and buildings where people sought safety have been attacked. 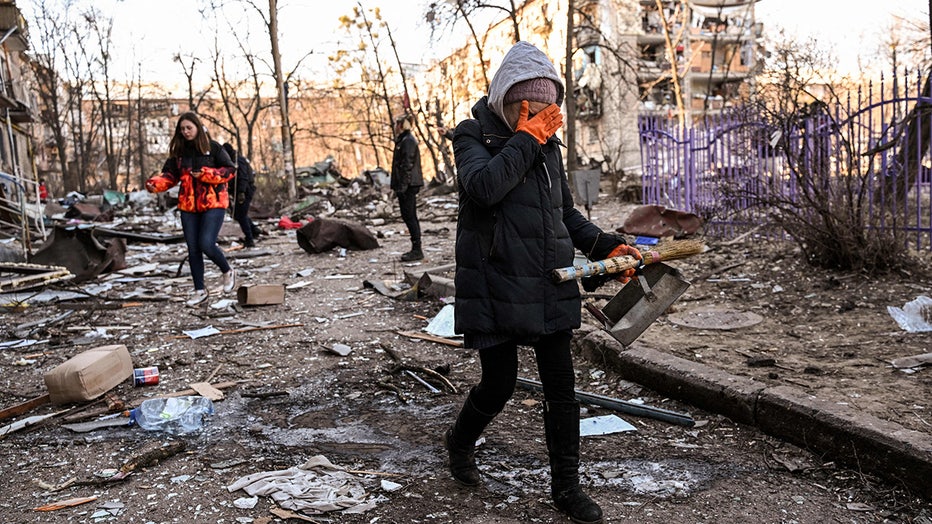 A woman reacts as she leaves the area where a five-story residential building partially collapsed after a shelling in Kyiv on March 18, 2022. (Photo by SERGEI SUPINSKY/AFP via Getty Images)

Early morning barrages hit a residential building in the Podil neighborhood of Kyiv, killing at least one person, according to emergency services, who said 98 people were evacuated from the building. Kyiv's mayor said 19 were wounded in the shelling, just north of downtown Kyiv.

Two other people were killed when strikes hit residential and administrative buildings in the eastern city of Kramatorsk, according to the regional governor.

In the besieged port city of Mariupol, rescuers are searching for survivors of a Russian airstrike on a theater Wednesday where hundreds of people were sheltering.

Britain’s defense intelligence chief says Russia is shifting to a "strategy of attrition" after failing to take major cities. Lt. Gen. Jim Hockenhull warned that the strategy will entail "reckless and indiscriminate use of firepower" that will worsen the humanitarian crisis. 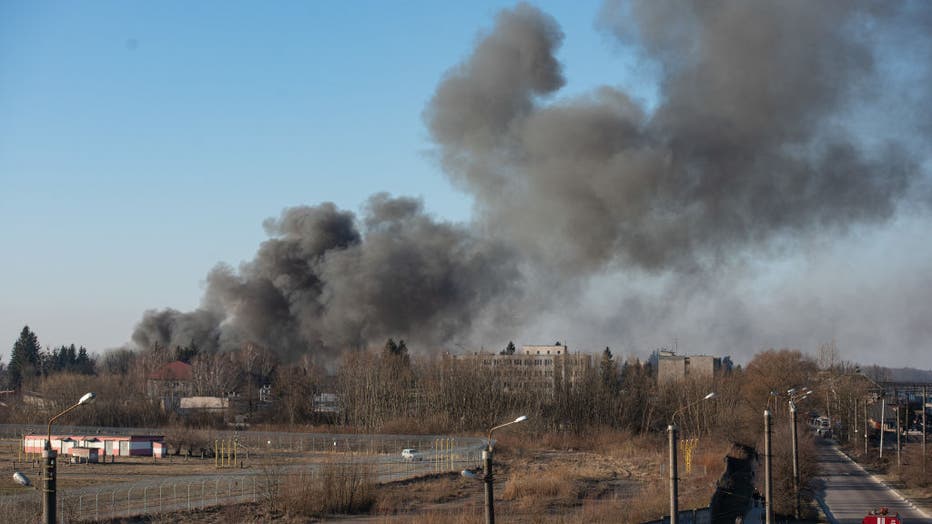 LVIV, UKRAINE - MARCH 18: Smoke is seen above buildings close to the airport on March 18, 2022, in Lviv, Ukraine. (Photo by Getty Images)

What is Putin saying?

On Friday, Putin appeared at a huge flag-waving rally in Moscow and praised his country’s troops in biblical terms as they rained lethal fire on Ukraine’s cities.

"Shoulder to shoulder, they help and support each other," Putin said of the Kremlin’s forces. "We have not had unity like this for a long time," he added to cheers from the crowd.

Moscow police said more than 200,000 people attended the rally and a concert marking the eighth anniversary of Russia’s annexation of the Crimean peninsula, seized from Ukraine.

Earlier this week, Putin likened domestic opponents of the war to "gnats" who try to weaken Russia at the behest of the West. 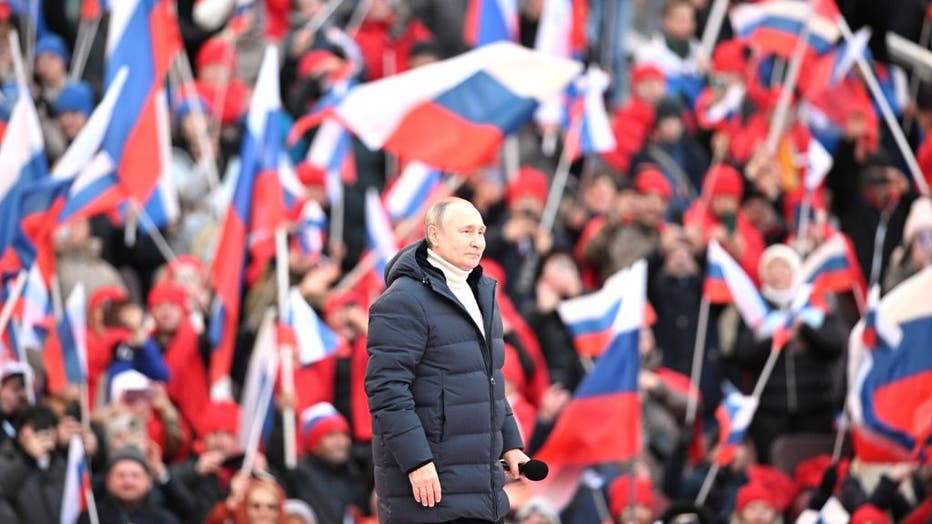 Russian President Vladimir Putin gives a speech at a concert marking the eighth anniversary of Russia's annexation of Crimea at the Luzhniki stadium in Moscow, Russia on March 18, 2022. (Photo by Kremlin Press Office / Handout/Anadolu Agency via Gett

What are world leaders doing?

President Joe Biden and China’s Xi Jinping spoke Friday for nearly two hours via video as the U.S. looks to deter Beijing from providing military or economic aid for Russia’s invasion. In a readout of the conversation, China’s Foreign Ministry deplored "conflict and confrontation" as "not in anyone’s interest" — but didn’t assign blame to Russia.

French President Emmanuel Macron pressed for an immediate cease-fire in a phone call Friday with Putin. Macron, who has spoken numerous times with the Russian leader, again objected to repeated attacks on civilians, his office said. It said that Putin laid the blame on Ukraine.

Biden plans to travel to Europe next week for talks with European leaders about the Russian invasion, and will attend an extraordinary NATO summit in Brussels.

From the early morning, Kharkiv is under heavy shelling as thousands were forced to flee the city. Maria Avdeeva has documented the destruction in her city and explains the continued lies from President Putin to the Russian people.

Where to the Russia-Ukraine talks stand?

The head of the Russian delegation in talks with Ukrainian officials says the parties have come closer to an agreement on a neutral status for Ukraine — one of the key Russian demands as its offensive continues. Vladimir Medinsky said Friday that the sides also have narrowed their differences on the issue of Ukraine dropping its bid to join NATO.

What is the civilian toll in the war so far?

The U.N. migration agency estimated Friday that nearly 6.5 million people have now been displaced inside Ukraine. That's on top of 3.2 million refugees who have already fled the country. The estimates come from the International Organization for Migration.

The U.N. human rights office says that it has recorded a total of 816 civilians killed and 1,333 injured since the fighting began on Feb. 24, though it only reports counts that it can verify. It believes the figures vastly understate the actual toll. Ukrainian officials say thousands have been killed.

The World Health Organization has verified 43 attacks on hospitals and health facilities, with 12 people killed and 34 injured.

Footage posted online on Thursday, March 17, shows vast destruction at the site of a theater in central Mariupol, Ukraine, that local officials said was used as a civilian shelter and alleged was bombed by Russia one day prior. (Credit: Azov Battalion via Storyful)

Since the start of Russia's invasion of Ukraine, AP journalists are relaying images of destruction, distress, and defiance from across the country.

A soldier standing guard near the site of the strike in Lviv said he heard three blasts in quick succession around 6 a.m. A nearby resident described his building vibrating from the explosions and people panicking. Smoke continued to rise from the site hours later.

In the eastern city of Kharkiv, doctors are struggling to treat COVID-19 patients as the bombs fall outside. Several times a day, air raid sirens wail at a local hospital, sending virus patients — some connected to ventilators and struggling to breathe — into bomb shelters.

How is the world responding to the war?

The United States and its allies have put a slew of sanctions in place aimed at crippling the Russian economy. Hundreds of international companies have announced that they are curtailing operations in Russia, and those who remain are under pressure to pull out.

Pope Francis on Friday denounced what he called the "perverse abuse of power" in Russia's war in Ukraine and called for aid for Ukrainians whose identity, history and tradition" are under attack. Francis’ comments were some of his strongest yet in asserting Ukraine’s right to exist as a sovereign state.

Aid agencies are ramping up their efforts to deliver relief supplies to civilians affected by the fighting and refugees who have fled Ukraine. The Polish city of Rzeszow, about 60 miles (100 kilometers) from the Ukrainian border, has become a humanitarian hub for the region.

Film icon Arnold Schwarzenegger told Russians in a video posted on social media Thursday they’re being lied to about the war in Ukraine. He also accused Putin of sacrificing Russian soldiers’ lives for his own ambitions.