KYIV, Ukraine - Two million people — half of them children — have fled Ukraine in the less than two weeks since Russia invaded the country, officials said Tuesday, as Europe's worst refugee crisis since World War II grows by the day.

As the cross-border exodus from Ukraine continued, the humanitarian situation in the country's besieged cities grew more dire, including the port of Mariupol, where bodies lay uncollected in the streets and civilians waited anxiously for word that they'd be allowed to evacuate.

People did manage to leave the northeastern Ukrainian city of Sumy on buses on Tuesday through one of the humanitarian corridors Russia and Ukraine agreed to Monday. But that happened after overnight shelling killed 21 people in the city, according to the Ukrainian officials, as fierce fighting continued in a huge swath of the country.

Meanwhile, Poland said it would give Soviet-era fighter jets to the U.S. for transfer to the Ukrainian military, which risks provoking a response from Moscow. And President Joe Biden banned Russian oil imports to the U.S., seeking to further cripple the Kremlin's ability to finance the invasion. 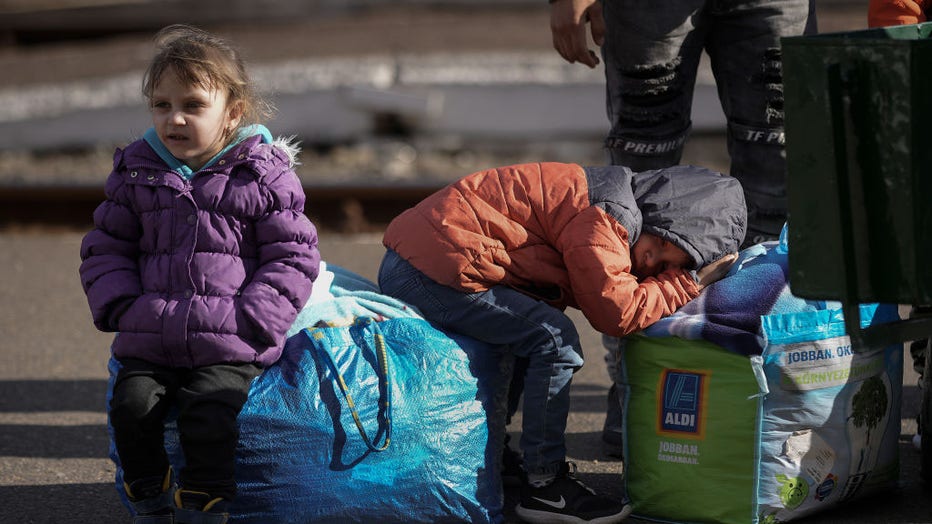 Here’s a look at key things to know about the war:

What has been directly witnessed or confirmed by the Associated Press?

Videos showed people boarding buses in Sumy on Tuesday and showed buses marked with a red cross driving along a snowy road as they headed out of the city.

Ukrainian Deputy Prime Minister Iryna Vereshchuk said both sides agreed to a cease-fire from 9 a.m. to 9 p.m. for the evacuation of Sumy civilians, who were headed southwest to the Ukrainian city of Poltava.

Earlier, a video from Sumy showed rescuers pulling the wounded out of debris following an overnight airstrike. A woman who was trapped under the rubble survived, according to the Ukrainian Interior Ministry.

Video also showed women and children in Mariupol gathered in a basement shelter as outgoing artillery fire blazed in the distance. One of the women, Goma Janna, lamented, "Why shouldn’t I cry? I want my home, I want my job. I’m so sad about people and about the city, the children."

Civilians in Mariupol have been without water, heat, sanitary systems and phone service for several days, and many have turned to breaking into shops. The video showed a Ukrainian soldier telling people, "People, please be united. You don’t need to panic. Please don’t steal everything. You will live here together."

Where a small cache of bottled water has been left on a sidewalk, a soldier said it was for women, children and the elderly, and that men should search for water elsewhere.

How are evacuations going?

Meanwhile, buses emblazoned with red cross symbols carried water, medicine and food toward Mariupol, where authorities planned to start digging mass graves for all the dead. The plan was for them to then ferry civilians out of the city of 430,000 people, Vereshchuk said.

But soon after officials announced that buses were on their way, Ukrainian officials said they had learned of shelling on the escape route.

It was unclear whether the supply convoy made it to Mariupol or whether any civilians managed to get out. The city's deputy mayor told the BBC that Russian forces continued to pound areas where people were trying to gather ahead of being evacuated. 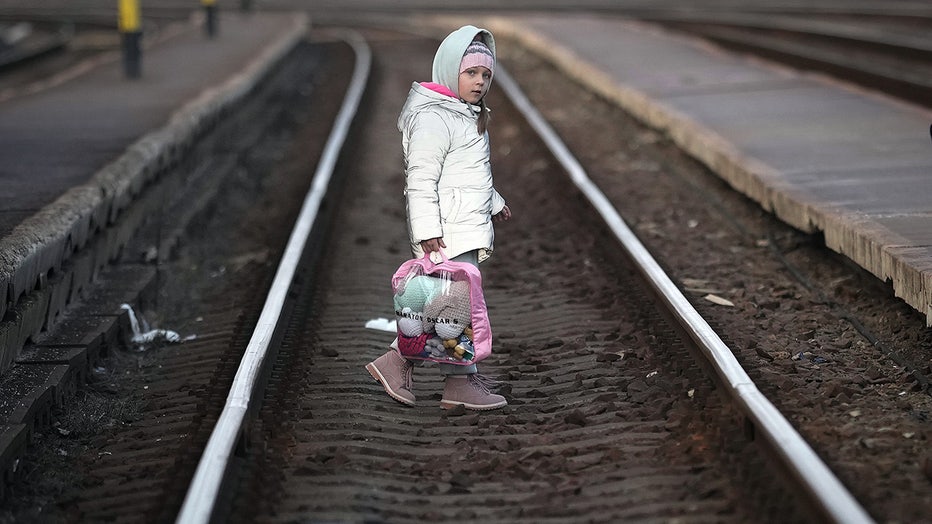 A young refugee girl fleeing Ukraine walks across the tracks as she arrives at the border train station of Zahony on March 08, 2022 in Zahony, Hungary. (Photo by Christopher Furlong/Getty Images)

Russia said Monday that civilians would be allowed safe passage out of several cities, including Sumy, Mariupol, Chernigiv, Kyiv and Kharviv. But it wasn't clear if evacuations happened in any of those cities aside from Sumy. Attempts to create safe evacuation corridors have stumbled for days amid continuing fighting and objections to the proposed routes.

Ukrainian officials said a safe corridor did open early Tuesday from Irpin, a city near Kyiv that has been without electricity, water and heat for days. But it wasn’t clear how long it remained open or how many people used it.

Ukrainian President Volodymyr Zelenskyy called for the expansion of humanitarian corridors on Tuesday. In a video address from an undisclosed location, he said a child had died of dehydration in Mariupol, another sign of the city’s desperation. 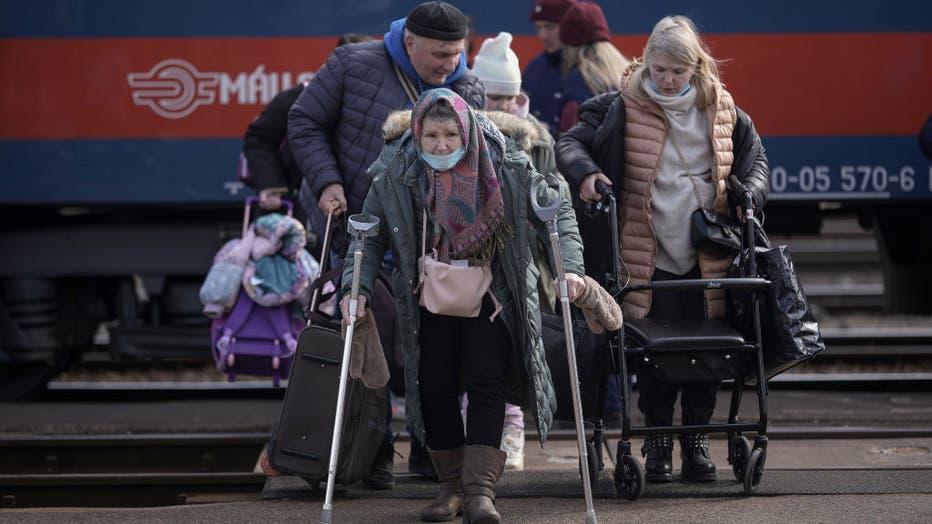 What else is happening on the ground?

The mayor of Lviv said the city in far western Ukraine was struggling to feed and house the more than 200,000 people who have fled there. The displaced are being housed in the city's sport halls, schools and other buildings.

In the nearly two weeks since Russian President Vladimir Putin launched the invasion of Ukraine, his forces have captured a swath of southern and coastal Ukraine but have seen their advances stopped in many areas, including around Kyiv. 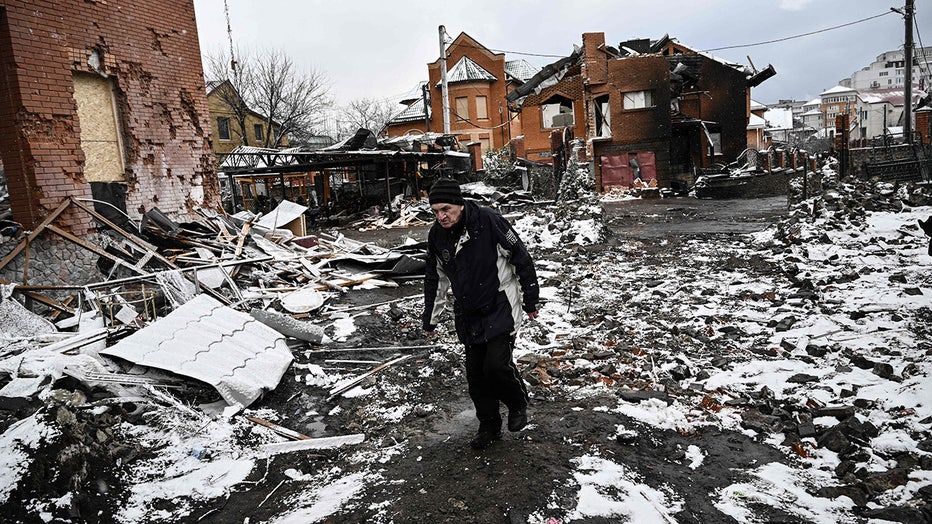 A man walks between houses destroyed during air strikes on the central Ukranian city of Bila Tserkva on March 8, 2022.(Photo by ARIS MESSINIS/AFP via Getty Images)

How many people have been killed?

Thousands of people are thought to have been killed, both civilians and soldiers, though the actual number remains unknown.

The U.S. believes Russia underestimated the strength of Ukraine’s resistance before launching its invasion and has suffered thousands of casualties, the Biden administration’s top intelligence official told lawmakers Tuesday.

"We assess Putin feels aggrieved the West does not give him proper deference and perceives this as a war he cannot afford to lose," Director of National Intelligence Avril Haines said during a House Intelligence Committee hearing. "But what he might be willing to accept as a victory may change over time given the significant costs he is incurring."

The U.N. human rights office said Tuesday that it had confirmed that 474 civilians had died and 861 had been wounded in Ukraine since the Feb. 24 start of the war, though it acknowledged that the actual figures are likely much higher. U.N. officials also said Tuesday that 2 million people have fled Ukraine.

The World Health Organization said six health care workers have been killed and nearly a dozen have been wounded in attacks. It has confirmed 16 attacks on health care facilities in Ukraine since Russia’s invasion began.

What about aid to Ukraine and sanctions against Russia?

The U.S. and its NATO allies have rejected Ukraine's calls to enforce a no-fly zone over the country so as to avoid direct military engagement with Russia. But Poland said Tuesday that it would give all of its MiG-29 fighter jets to the U.S., apparently agreeing to an arrangement that would allow them to be used by Ukraine’s military, though it wasn't immediately clear how such a transfer might happen. Ukrainian pilots are trained to fly Soviet-era fighter jets.

Meanwhile, President Joe Biden said the U.S. will ban all Russian oil imports, toughening the toll on Russia’s economy in retaliation for its invasion of Ukraine. He acknowledged, though, that it will bring rising costs to Americans, particularly at the gas pump.

Biden's decision followed Zelenskyy’s plea to U.S. and Western officials to cut off the imports. Energy exports have kept a steady stream of cash flowing to Russia despite otherwise severe restrictions it faces. 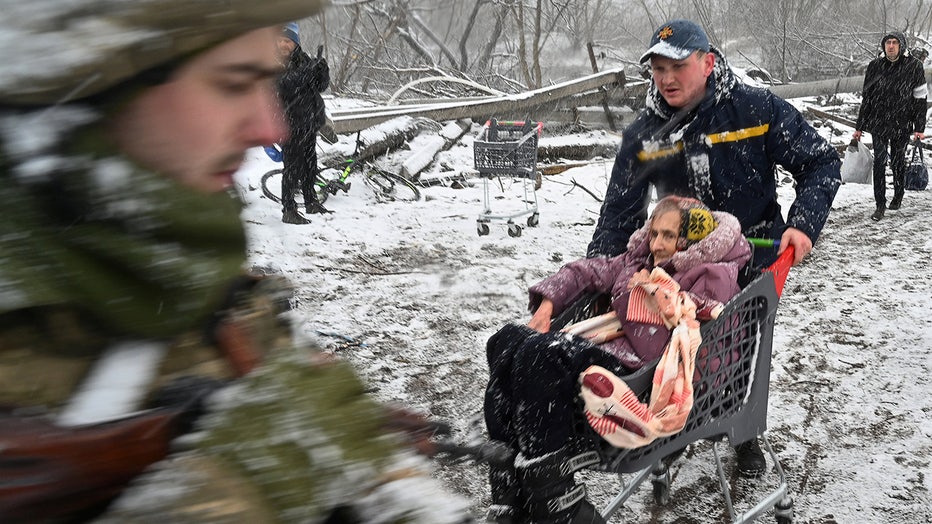 A rescuer pushes a cart with an elderly woman during the evacuation by civilians of the city of Irpin, northwest of Kyiv, on March 8, 2022. (Photo by SERGEI SUPINSKY/AFP via Getty Images)

Surging prices for oil and other vital commodities, such as wheat used in subsidized bread and noodles, are rattling global markets. Worries are growing that the invasion of Ukraine will upend already tight oil supplies, as Russia is one of the world’s largest energy producers.

A growing number of multinational businesses have cut Russia off from vital financial services or stopped operating in the country. Among the most recent is McDonald's, which said it will temporarily shutter all its 850 restaurants in Russia but will keep paying wages for now to it 62,000 workers there.