BOSTON -- The Boston Marathon runner seen on video crumpling to the ground as an explosion goes off near the finish line Monday was Bill Iffrig, 78, of Lake Stevens.

"It was only five feet away from me," Iffrig told The Everett Herald in the phone interview from Boston, adding that his only injury was a scrape on his knee. "It was really loud."

"Just the shock from the blast was the only damage," he said from his hotel room.

He expanded on the first few moments during a later interview with CNN.

"I got down to within about 15 feet of the finishing apron and heard just a tremendous explosion, sounded like a bomb went off right next to me, and the shock waves just hit my whole body and my legs just started jittering around," he told CNN. "I knew I was going down and so I ended up down on the blacktop."

Race officials came to check on him and helped him up – and he walked across the finish line, he told the Herald.

"I ended up second in my division," he said. "After you've run 26 miles, you're not going to stop there." 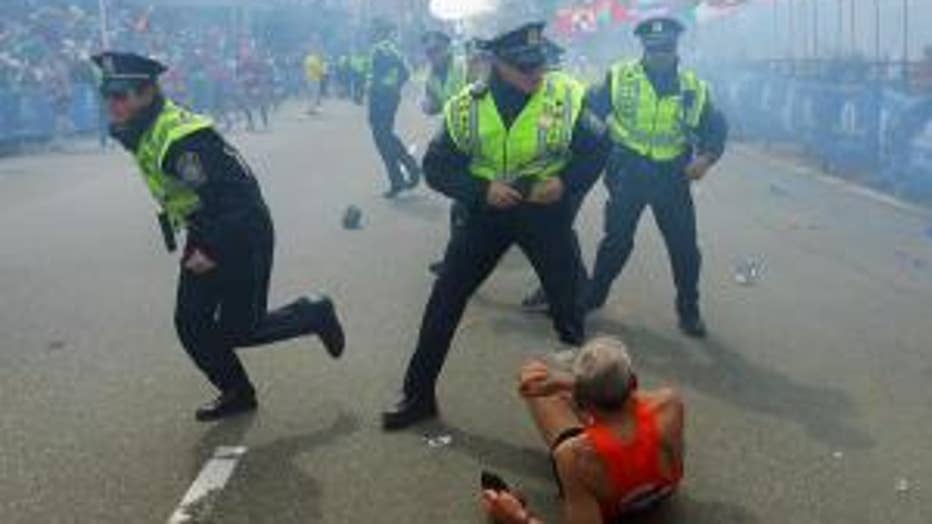 Bill Iffrig of Lake Stevens is on the ground after the first explosion at the Boston Marathon Monday. He suffered only a scrape on his knee. (Photo: Boston Globe)

Afterward, Iffrig walked the half-mile to his hotel room. "So they let me get out of there and I went on home to my wife," he said.

"It was a close one though, boy. I'll tell you, that scared me."