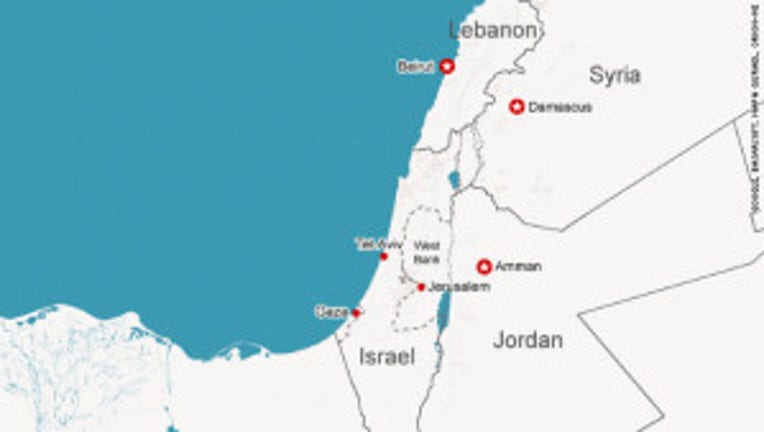 Israel launched a series of blistering air strikes Wednesday on what it says are terrorist targets in Gaza, killing the chief of Hamas' military wing and at least eight others, Israeli and Palestinian officials said.

Palestinian leaders immediately condemned the attacks as an escalation, with President Mahmoud Abbas calling for an emergency session of the Council of the League of Arab States to discuss what he called Israeli "aggression," the Egyptian state news agency MENA reported.

Hamas' military wing warned that Israelis had opened "the gates of hell on themselves" with the move.

There were at least 35 airstrikes in an eight-hour span, Hamas security sources said. As night fell, more air strikes could be heard, and witnesses in Gaza said four more attacks were conducted late Tuesday.

Israel's Iron Dome air defense system intercepted 13 rockets launched at Israel in the span of a few hours, a statement on the Israel Defense Forces (IDF) website said, and a rocket struck a shopping center in a major city in southern Israel.

Palestinian medical sources said nine people died in the Israeli air strikes, including a young girl, and 35 others were wounded, with 10 in serious condition. However, the health minister in Gaza, Mufid al-Mukhalalati, put the death toll at seven, including two young girls.

The dead included Ahmed al-Ja'abari, the popular and influential head of the Hamas military wing, and his son, the group said on its website.

The Israeli operation -- which the military calls "Operation Pillar of Defense" -- came after Prime Minister Benjamin Netanyahu warned this week of pending retaliation by Israel for increased rocket attacks from Gaza.

"I would ask you, I'd ask any person around the planet: What would you do if your population was targeted day after day?" Israeli government spokesman Mark Regev told CNN, later adding that "you have to see our operation as fundamentally defensive."

A spokesman for Hamas, Osama Hamdan, also claimed that Hamas has been defending itself from Israeli attacks.

"I think the ones who declared war was Israel, and I think the Palestinians are in the position of defending themselves and nothing more than this," he said.

Hamas will resist as long as the Israeli offensive lasts, Hamdan said.

Israeli navy ships could be seen firing into Gaza from the Mediterranean. The navy struck "terror sites" there, the IDF said via Twitter.

The Israeli military said in a statement Wednesday it targeted "a significant number of long-range rockets sites" to deliver "a significant blow" to Hamas' underground rocket-launching capabilities and munitions warehouses.

Some of the munitions warehouses were in civilian residential buildings, which showed that Hamas uses a strategy of human shields, Israeli military sources said.

"The aim of targeting these sites is to hamper their rocket-launching weapons build up capabilities," the IDF statement said, adding that the Gaza strip had become "a frontal base for Iran firing rockets and carrying out terrorist attacks against Israeli citizens."

Angry crowds gathered at the heavily damaged vehicle that contained the bodies of al-Ja'abari and his bodyguard.

Saeb Erakat, the chief Palestinian negotiator, condemned "in the strongest possible terms" what he called the Israeli assassination of al-Ja'abari.

In an interview with CNN, Erakat labeled the attack the beginning of a "major, major Israeli escalation," and he called on the international community to pressure Israel to halt its operation.

Al-Mukhalalati, the Gaza health minister, also called on "the free world to stop this massacre committed by Israel."

"This is the man with blood on his hands. This man is a known and wanted terrorist," he said. "In taking him out, Israel was acting legitimately."

The latest escalation in violence is part of a cycle of attacks between periods of relative stability between Israel and the Palestinians.

"This was both inevitable and predictable," said Aaron David Miller, a Middle East expert and vice president at the Woodrow Wilson Center.

There is no long-term basis for both sides to find a lasting peace, he said.

Israel and the Palestinians have "completely different political and strategic goals," Miller explained. The focus should be on how to bring security until a basis for long-term stability arises, he added.