The robot dog can "run" up to 7 mph on flat terrain but was also built for sand, water and uneven surfaces. (Credit: FOX Weather)

The next generation first responder can endure hazardous fumes, get up after falling through the floor of a burning building and leap to a victim in a single bound – we are talking robo-responder. Technology enables emergency crews to go where it is not safe for humans, get eyes in the sky faster, get to survivors faster and establish a communication network after a natural disaster.

Meet the robot dog. This dog has a super sniffer, just like man’s best friend. It can "sniff out" chemical leaks, radiation, and bombs. An arm mounted on the dog can move debris like a collapsed wall clearing the way for medics.

This bird dog takes the moniker literally. It can sport a drone that operators can launch at ground zero to get an aerial survey. The operator can be next to the dog or 500 miles away and see in every direction.

"Imagine a scenario in a disastrous situation where it's not safe to send a human," drone operator Allen Beadle told FOX Weather. "You send the dog in, he’ll surveil the area and then launches the drone. So now you've got a ground view and an overhead view at the same time."

The dog can "run" up to 7 mph on flat terrain but was also built for sand, water and uneven surfaces. It can get up or roll over and operate upside down if it flips over.

"Mountainous terrain, uneven terrain -- the dog is fantastic," demonstrated Beadle in the FOX Weather studio. "The dog can navigate uneven surfaces and inclines a lot better, a lot more efficiently than I can. And if the dog slips and falls, he's not going to break his leg." 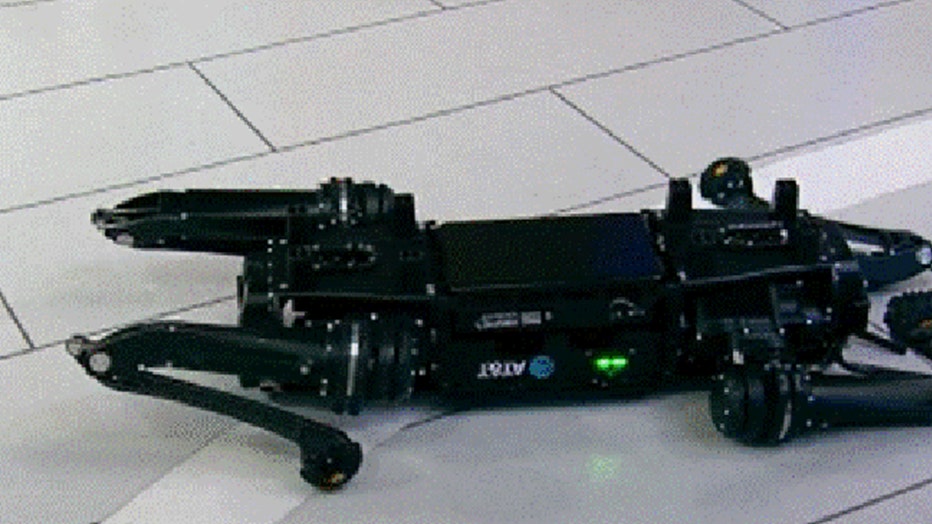 After Beadle pushed the dog upside down, the legs reversed and the dog was mobile again on the filp-side. (FOX Weather)

The dog and other technologies were borne from the tragedy of 9/11. FirstNet, a mission to deploy, operate and maintain a high-speed nationwide wireless broadband network to public safety, surveillance and first responders.

"One of the serious lessons learned from 911 was the fact that there was a lack of communications consistency between agencies," Beetle said. "So with 911, you had all these hundreds, if not thousands of public safety responders. And a lot of times they couldn't talk to each other."

Beadle also introduced the "flying cow." The large drone is a flying cell phone tower that restores and supplements cell service after a storm like Hurricane Ian or a wildfire destroys the network.

"We can take it up to about 400 feet. We supply power via a tether," he told FOX Weather’s Steve Bender at the FirstNet Show and Tell. "So by doing that, we can leave this drone up around the clock days at a time."

This allows first responders to communicate with each other as well as give isolated victims a voice to tell dispatchers where to send search and rescue teams.

Researchers at the University of Tokyo have wrapped a robotic finger in "tissue-engineered skin" in a bid to help humanoid robots "better mimic the appearance and function of human beings," according to a report published on June 9. (Credit: University of Tokyo via Storyful)

The Lee County Sheriff’s Office said it is using drones to survey damage and spot looters across the southwest Florida county in the wake of Hurricane Ian. Lee County Sheriff Carmine Marceno provided an update on recovery efforts.

The Center for Disaster Risk Policy at Florida State used off-the-shelf drones to map damage from Ian. The center’s drones mapped over 1,800 acres of damage in just 4 hours in Mayfield, Kentucky after an EF-4 tornado destroyed mile after mile in 2021. The group used robot data collection to structurally assess buildings after the twister before sending in first responders just as they did after the Surfside condo collapse that killed 98 in Florida in 2021.

Drone footage shows devastation after tornado hit Mayfield, KY, Friday night. Storm Chaser Brett Adair tells us what it's like as the sun rises on the city.

Is it a bird? A plane? Ironman?

Even paramedics are strapping on Jet Suits to get to victims of landslides and other remote areas quicker. England’s Great North Air Ambulance is running trials for mountain rescues. A paramedic in the jet suit was able to reach the mock-victim in 90 seconds. The same rescue took 25 minutes to reach the same victim climbing.

Gravity Industries' founder and inventor of the Jet Suit showed off the technology to FOX Weather.

Dogs, cows, birds and even Ironman the medic are saving lives in natural disasters. Crews get to victims faster without putting first responders in jeopardy.

Find the latest on this story at FOXWeather.com.