A state police investigator filed a criminal complaint on Tuesday at a town court in Lewisboro, New York, accusing Durst of second-degree murder.

The action wasn't announced at the time by any law enforcement officials or Westchester District Attorney Mimi Rocah, who recently convened a grand jury to consider charges.

"The Westchester County District Attorney’s Office can confirm that a complaint charging Robert Durst with the murder of Kathleen Durst was filed in Lewisboro Town Court on October 19, 2021. We have no further comment at this time," her office said in a statement Friday.

The grand was empaneled last week and has started hearing witness testimony, a person familiar with the matter told The Associated Press this week. The person was not authorized to speak publicly about the matter and did so on condition of anonymity. 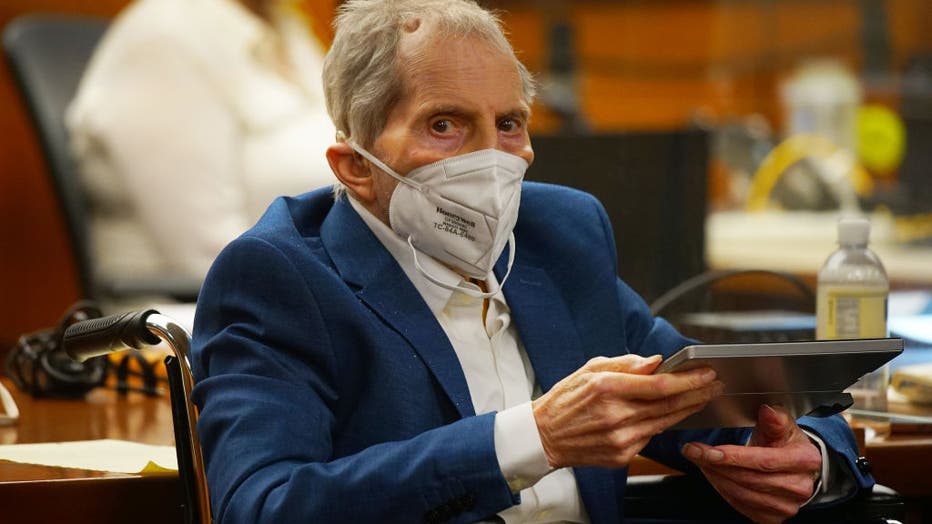 Robert Durst holds a device to read the real time spoken script as he appears before Judge Mark E. Windham during court proceedings in his murder trial at Inglewood Courthouse on May 18, 2021 in Inglewood, California.(Photo by Al Seib-Pool/Getty Imag

The grand jury process had been expected to take several weeks.

A message seeking comment was left for Durst’s lawyer and Kathie Durst’s family.

Robert Durst, 78, was sentenced last week to life in prison without parole for murdering a confidante whom prosecutors say helped him cover up Kathie Durst’s killing. Los Angeles prosecutors say Durst shot Susan Berman in 2000 as she was preparing to confess her role to police.

Durst, who has numerous medical issues, sat in a wheelchair during much of the sentencing hearing and in the days since has been hospitalized on a ventilator after testing positive for COVID-19, one of his lawyers said.

Her body was never found. At the request of her family, she was declared legally dead in 2017. Robert Durst divorced Kathie Durst in 1990 citing abandonment.

He was not charged in her disappearance until this week despite several efforts over the years to close the case. Authorities reopened the case in 1999, searching a lake and the couple’s home.