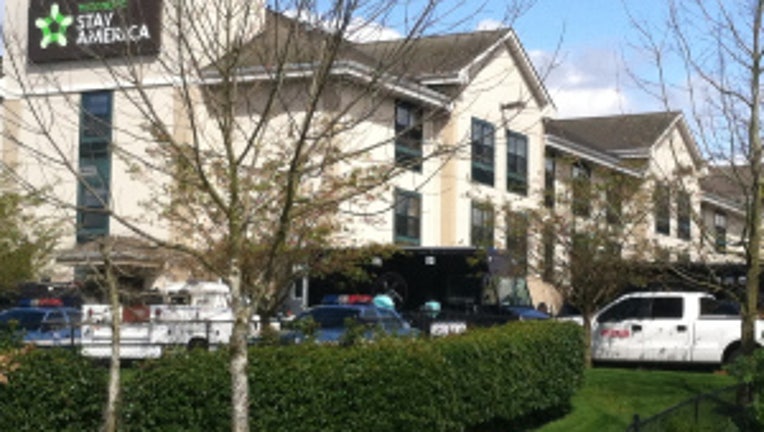 SEATTLE -- Seattle SWAT Teams and negotiators talked down a robbery suspect barricaded in a hotel room with a hostage Sunday afternoon at the Extended Stay America motel in North Seattle.

According to Seattle police, investigators talked with the suspect barricaded in a hotel room at 133rd Street and Stone Way. Police said the man held his girlfriend and a pitbull hostage, and that all rooms on the third floor have been evacuated as police try to negotiate with the man.

The man eventually released his girlfriend around 4:30 p.m. , police said, but would not leave the room for some time. The woman, who was wanted on a different warrant, was taken into custody by police.

Around 7:30 p.m., the suspect came out after a long negotiation. He was taken into custody, and was slated to be booked into King County Jail.

Officers went to the motel Sunday afternoon to look for the man suspected of robbing a Key Bank and fleeing on his bike in early April. When police contacted the man, he said he was holding his girlfriend hostage, and that he would not leave the room.

Police said the hostage smoked drugs in the motel room for most of the day, potentially exasperating the situation.

"Admittedly they had been smoking drugs all day long so it's not impossible but it makes it difficult to try and communicate with somebody," Seattle Police Department Detective Mark Jamieson said.

Guests were caught off guard when they wee asked to leave their rooms.

"I opened the door and it was police and they were saying, oh, you need to evacuate," Lorenzo Manuel, a motel guest said. "Get whatever you need and then leave this floor."

Motel guest Rob Shindler said the incident was more than he bargained for.

"It created a bunch of havoc for a whole bunch of people," Shindler said.