Riverside Co. Sheriff Chad Bianco held a news conference on Dec. 29, 2022, to discuss the fatal shooting of a sheriff’s deputy by a man with a violent criminal history during a traffic stop. The suspect later died in a shootout.

RIVERSIDE COUNTY, Calif. - A deputy with the Riverside County Sheriff's Department in Southern California died after being shot by a suspect during a traffic stop.

The suspect was later shot and killed by deputies following a pursuit that ended on the 15 Freeway.

The deputy was identified as 32-year-old Isaiah Cordero, a motor enforcement deputy assigned to the city of Jurupa Valley — located about 50 miles east of Los Angeles. 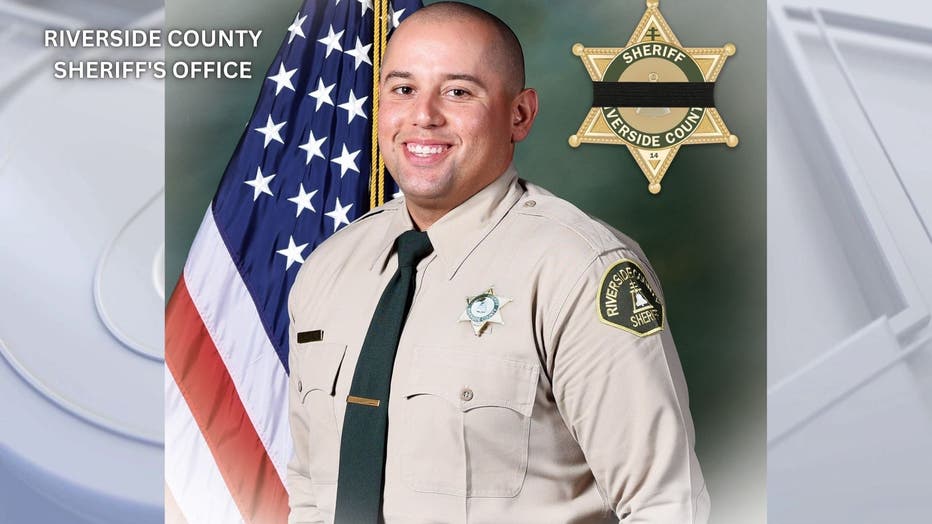 According to Sheriff Chad Bianco, Deputy Cordero was shot during a traffic stop around 2 p.m. Thursday in the 3900 block of Golden West Avenue in Jurupa Valley. He attempted to pull over a driver and as he approached the vehicle the suspect pointed a gun and shot Cordero.

Witnesses called 911 and stayed with the deputy till paramedics arrived. The suspect, later identified as William Shae McKay, fled the area setting off a massive manhunt.

McKay was later located in San Bernardino County and when deputies attempted to approach him, he fled, triggering a pursuit.

The pursuit, which spanned from San Bernardino to Riverside counties, came to a violent end after the suspect vehicle crashed and became disabled along the 15 Freeway in Norco.

According to Sheriff Bianco, McKay fired multiple rounds at deputies at the end of the pursuit. Deputies returned fire, striking McKay.

Helicopter video shows the scene on the 15 Freeway on Dec. 29, 2022, in Norco, California, after a pursuit of a suspect accused of shooting a California sheriff's deputy during a traffic stop. Credit: FOX 11 Los Angeles

The suspect did not die at the scene but was treated and transported to the hospital where he succumbed to his injuries.

Both deadly shootings remain under investigation. It is unknown what the suspect was initially wanted for when authorities initiated the traffic stop. 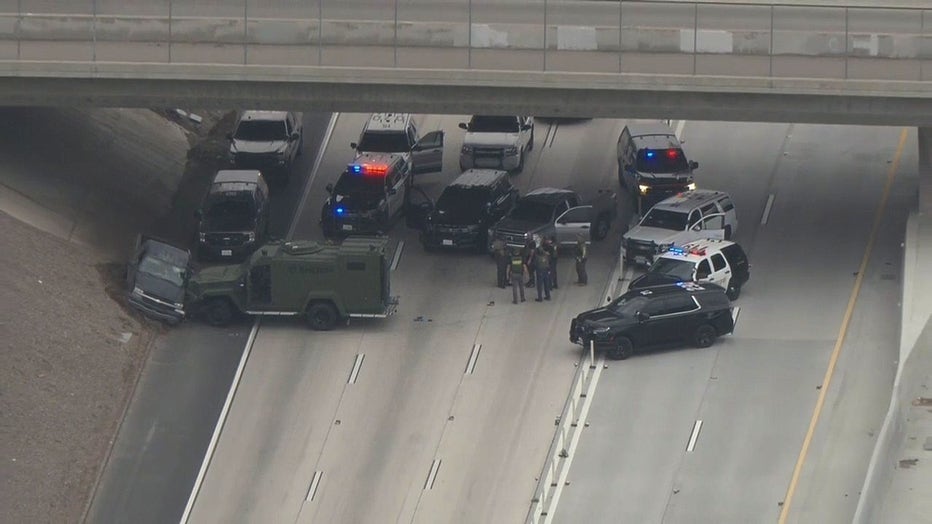 The scene on Dec. 29, 2022, after a pursuit that spanned from San Bernardino to Riverside counties in California. It came to a violent end after the suspect vehicle crashed and became disabled along the 15 Freeway in Norco. (Credit: FOX 11 Los Angele

Mckay, 44, had an extensive criminal history which includes kidnapping, robbery, multiple assaults with a deadly weapon, and the stabbing of a CHP K9.

RELATED: Deputy Isaiah Cordero death: Sheriff says 'we would not be here today if judge had done her job’

"This terrible tragedy should have been prevented by the legal system. McKay has an extensive and violent past and was convicted of a third strike in November of 2021. Instead of sentencing him to 25 years to life, which should have happened, the judge lowered his bail, allowing him to be released," Bianco said during a press conference.

"We would not be here today if that judge had done her job," he added.

Hundreds of law enforcement personnel gathered outside Riverside Community Hospital Thursday evening to hold a procession for the fallen deputy. Draped with the American flag, the deputy's casket was taken from the hospital and put in a Hearse where dozens of patrol cars followed it from behind.

The Riverside Sheriff's Association released the following statement, "We are devastated by the grief of losing Deputy Isaiah Cordero, a deputy who was a ray of sunshine in the Riverside Sheriff's Department, a person who was dedicated to protecting others. Once again, we face a tragic reminder of the selflessness and unwavering courage required of peace officers and their families. Deputy Cordero put on his uniform daily to make a difference in his community and keep families safe. Deputy Cordero's death leaves a tremendous hole in the hearts of so many people who had the chance to know him personally."

Cordero started working for the sheriff's department in May of 2014 as a correctional officer for the Robert Presley Detention Center as well as worked at the Larry Smith Correctional Center and the Indio Jail. In February 2018 he began the 204 Basic Academy and was promoted to a sworn deputy sheriff. In September of 2022, he completed motor school.

"From the day he was hired, his goal was to become a motor deputy. Deputy Cordero learned from his mother the value of serving and helping others," Bianco said.