The hospitality industry is facing a labor shortage as many companies can't find workers to staff jobs.

A recently published exploratory study conducted among United States citizens in the workforce found increased levels of sexual abuse in the workforce than seen in previous research regarding labor trafficking abuse, multiple forms of exploitation across different industries and increased cases of domestic violence among victims of labor trafficking.

The study, which is the first to explore and focus on labor trafficking victimization among U.S. citizens, was conducted by researchers from John Jay College of Criminal Justice, Northeastern University and the University of Massachusetts Lowell.

Labor trafficking is described as the "recruitment, harboring, transportation, provision, or obtaining of a person for labor or services, through the use of force, fraud or coercion for the purpose of subjection to involuntary servitude, peonage, debt bondage or slavery, " according to the exploratory study.

While researchers did not specifically examine the correlation between low numbers of workers going back to their previous jobs due to possible labor trafficking victimization and the COVID-19 pandemic, researchers believe the ongoing pandemic had some impact on workers’ decisions. 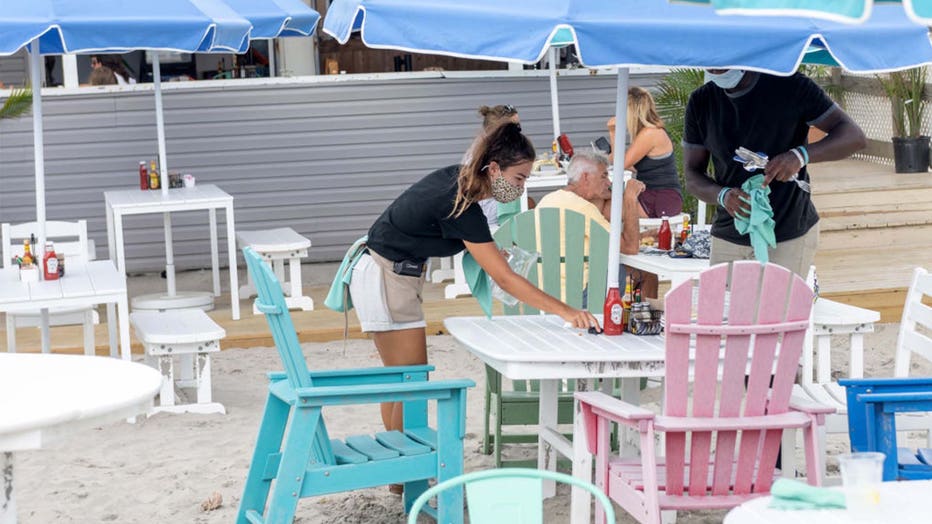 FILE - A waitress wearing a mask cleans a table at an outdoor beach restaurant as the state of New Jersey.

The COVID-19 pandemic forced many people to leave their jobs and find other sources of income. Despite reopenings and a wide range of industries returning to offices, many employees have decided not to return, possibly due to being victims of labor trafficking, researchers posited.

"These findings underscore the need for fair wages and oversight of industries where abuses have been more prevalent," researchers suggested.

The survey collected data from 240 individuals and focused primarily on U.S. citizens as opposed to "foreign-born undocumented or temporary workers in the United States," according to the exploratory study.

Industries with higher rates of labor trafficking victimization were "construction, food service, retail, or janitorial industries," according to the exploratory study.

Of the 240 victims who were surveyed, only 69% said they did not report the abuse and of the minority that did seek help, they reached out to those in higher positions such as a manager, supervisor or human resources.

"In most of these cases, respondents were not looking to leave their jobs but instead improve the negative conditions they were experiencing," researchers said.

Very little research has been done on labor trafficking and victimization in the U.S. and authors of the exploratory study emphasized a need for more focused studies on the topic.

"Data from the National Human Trafficking Hotline shows over 5,000 calls have been made about potential cases of labor trafficking since 2007, with most calls concerning the domestic servitude, agriculture, traveling sales crews, restaurant/fast food, and health and beauty service industries," according to the study.

Researchers acknowledge that collecting data on labor trafficking victims among U.S. citizens is very difficult, but believe there are huge numbers of people who are going under the radar due to underreporting or no reporting.

"Existing research on labor trafficking in the U.S. has mainly focused on the experiences of legal or undocumented migrant communities. As a result, we know very little about the phenomenon of labor trafficking or the attributes and profiles of its U.S. citizen victims," the study said.

Researchers also offered recommendations for employers and workers to better identify what labor trafficking and victimization look like, as suggested by participants in the exploratory study.

"We conducted the study in order to begin to fill a huge knowledge gap regarding the labor trafficking experiences of U.S. citizens," said lead Principal Investigator Dr. Meredith Dank, Research Professor at John Jay College. "We hope that the findings and recommendations from the study can help practitioners and law enforcement better identify US citizens who have been labor trafficked. Additionally, our goal is to provide policymakers with the necessary information to create and strengthen existing policies and laws to prevent this from happening now and in the future."