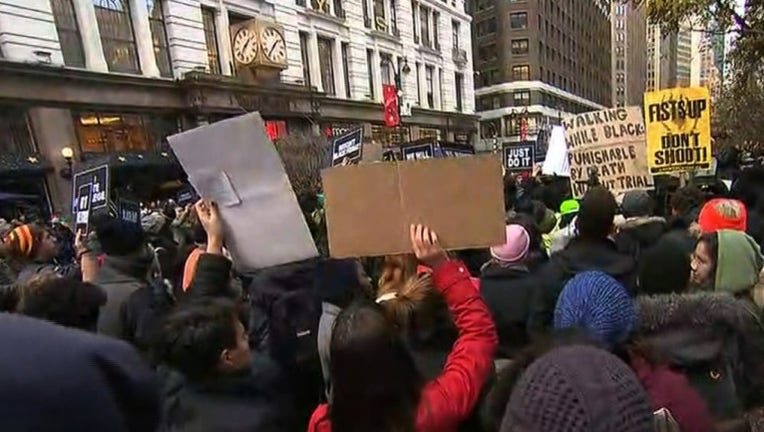 SEATTLE--'Tis the season to be happy and festive; to enjoy family, friends and shopping.

Well, at least if you're in Bellevue.

Many in Seattle say that increased protests over Ferguson and a general sense of unrest in the downtown area have steered people away from traditional holiday shopping centers, and its starting to hurt area businesses.

Bellevue, on the other hand,  is all dressed up for the holidays.

"I probably feel safer here at night," says Bellevue shopper Victoria Rossiytseva. "You hear Bellevue is a safer city than Seattle. It's one of the safest cities in Washington.”

But, on the other side of the lake, shoppers don't feel the same.  Just as the holiday shopping season was getting started, Ferguson protests and more than a week of riots have taken their toll.

"I've been here for ten years and this is the worst I've seen it,” Mini Donuts owner Steve Holt said.

Holt says he's hurting and everyone around him is too.

Seattle police and The Downtown Seattle Association have long sought a solution to the problem of downtown crime and there have been successes. But protests and riots throughout the years still cast a negative shadow.Still, the DSA says they believe downtown Seattle is the only place to be.

"There are tradeoffs with both destinations," says Downtown Seattle Association spokesman James Sido. "We think we have a varied experience here in downtown Seattle that really can't be matched in many urban centers across the country much less in our state.”

The Downtown Seattle Association believes where protests are concerned it is the unpermitted marches that lead to problem so the DSA, downtown merchants and Seattle Police are working together on a solution.

And besides, Seattle will always have a draw that Bellevue can never reach.

"I like both but they're both different experiences," says shopper Cherese Bourgoin. "I mean Bellevue is just down the street and Seattle you dress up and you go out.”