The "ring of fire" is a type of solar eclipse where the moon partially blocks the sun's light on Earth.

LOS ANGELES - Many Americans will have a chance to witness another astronomical phenomenon on Thursday during the "ring of fire" annular solar eclipse.

According to NASA, an eclipse "occurs when one heavenly body such as a moon or planet moves into the shadow of another heavenly body."

One type is a solar eclipse, where the moon moves between the sun and the Earth. This blocks the sun’s light, casting a shadow on the planet.

The "ring of fire" is an annular solar eclipse. NASA says it happens because the moon is too far away from Earth and cannot completely block out the sun’s view, leaving what appears to be a fiery ring around the moon. "Annular" comes from the Latin word for "ring."

Where to watch the ‘ring of fire’ solar eclipse

The "ring of fire" solar eclipse can be seen only by people living in a few remote places. However, it will be partially visible from the United States, northern Canada, Europe, northern Asia, Russia and Greenland, according to Time and Date, a site providing, time, weather and astronomy information.

In the United States, scientists said the eclipse will be partially visible in the upper Midwest and the East Coast, with the exception of Florida.

When to watch the ‘ring of fire’ solar eclipse

More specifically, Americans will be able to see the eclipse at sunrise on Thursday, June 10, according to Time and Date.

Mike Kentrianakis, who was the Eclipse Project Manager for the American Astronomical Society during the big eclipse in 2017, told the New York Times that the sun will be about two-thirds obscured when it rises at 5:25 a.m. Eastern time.

"It will then reach a maximum obscuration of nearly 73 percent at 5:32 a.m. from New York City," he wrote in an email, according to the Times.

How to watch the ‘ring of fire’ solar eclipse

The American Astronomical Society cautions people to wear eye protection, such as eclipse glasses, when trying to view the eclipse.

Space.com mentions never to look at the sun without proper equipment, saying it’s never safe to look directly into the sun’s rays.

If you can't see the eclipse due to geography, cloudy conditions or quarantine restrictions, several online streams have you covered. 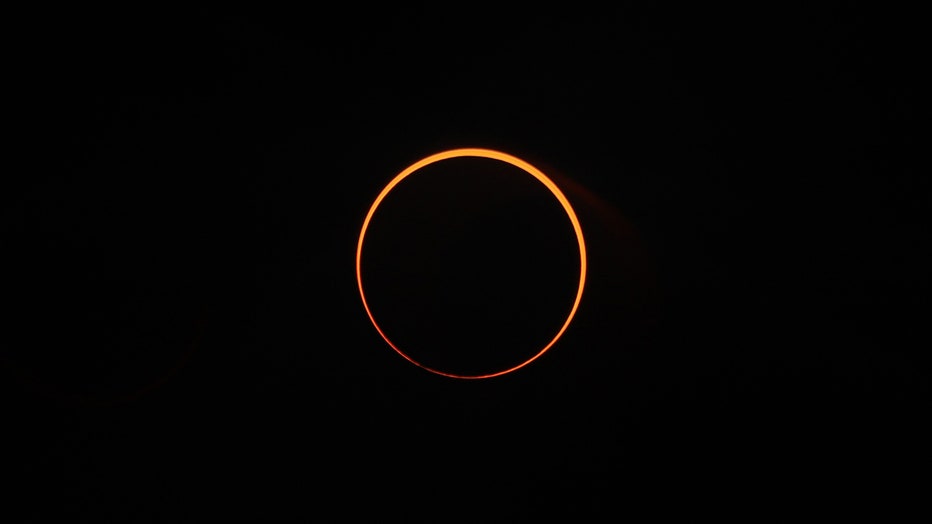 A solar eclipse is visible from district Simeulue, Aceh, Indonesia on December 26, 2019. The so-called ring of fire is seen from 25 districts and cities and its peak takes place between 11 am to 2 pm local time. (Photo by Khalis Surry/Anadolu Agency

In addition, Time and Date will livestream the eclipse on YouTube starting at 5 a.m. EDT.

NASA will also stream a live webcast showing views of the partial solar eclipse on NASA TV. This livestream will begin at 5 a.m. EDT, but will appear dark until sunrise at 5:47 a.m. EDT, according to Space.com.

In the United Kingdom, the Royal Museums Greenwich is hosting a live stream from the Royal Observatory. The livestream starts at 5:05 a.m. EDT on both Facebook and YouTube.

"Broadcasting from the Royal Observatory Greenwich, we're aiming to bring you the best possible view of the partial solar eclipse in the UK," the observatory team said on its website. "You'll see exactly the same view as our astronomers, with a live telescope feed of the Sun from our state-of-the-art Annie Maunder Astrographic Telescope."

The last total solar eclipse, visible in the U.S., was in August 2017. An estimated 20 million people watched as the moon completely covered the sun.

The next solar eclipse will take place on Dec. 4, according to NASA.

Chris Williams contributed to this story. This story was reported from Los Angeles.