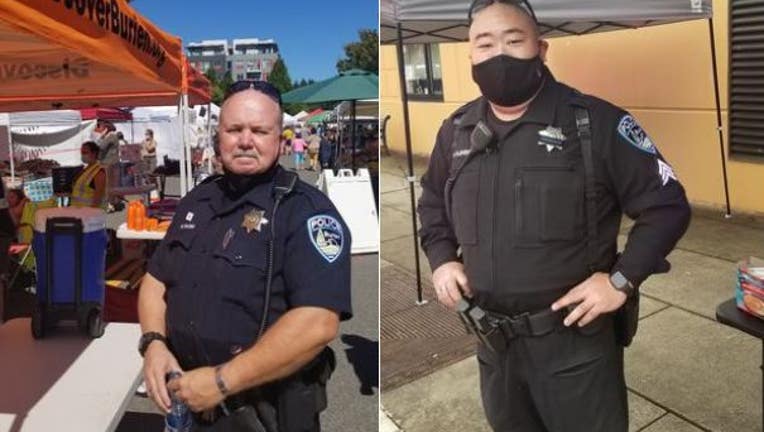 BURIEN, Wash. - A bank robbery suspect was arrested on Thursday, just minutes after walking out of a bank with cash, authorities say.

According to the Burien Police Department (BPD), a man walked inside a local bank in Burien and demanded money from the teller. As soon as the suspect walked outside with the cash, the teller pushed the button, and storefront officer Mark Hayden arrived in a minute and 15 seconds.

The BPD says Officer Hayden quickly shared the suspect description to other officers in the area. Sergeant Kajihiro was working emphasis patrol downtown, heard the call and arrived in ‘lightning fast time’.

Authorities say less than a minute later, Seageant Kajihiro spotted the suspect ducking inside a nearby library to avoid him, and took him into custody.

The BPD said in a Facebook post, "This was a great piece of teamwork and officers being in the right place at the right time! As a result, a bank robber got a trip to jail!"

RELATED: Police search for suspect who robbed a Domino's Pizza in Lacey

RELATED: Lacey PD looking for suspect who stole car with 7-month-old inside

Further details about the incident are limited at this time, and will be provided as soon as they become available.