Revive I-5: Weekend lane closures return for up to 16 weekends

The Washington State Department of Transportation says its "Revive I-5" project will cause weekend lane closures for up to 16 weekends this summer.

SEATTLE - The Washington State Department of Transportation says its "Revive I-5" project will cause weekend lane closures for up to 16 weekends this summer.

The project was scheduled to start Friday, May 6, but was postponed due to rainy weather. It was delayed again after a rainy forecast the weekend of May 13.

WSDOT officials said the work involves crews repaving southbound I-5 between I-90 and Spokane St, as well as replacing 56 expansion joints. This particular project is scheduled to finish fall 2022.

When the project starts, drivers will need to use the collector/distributor lanes while crews work.

The Washington State Department of Transportation (WSDOT) has dozens of long-planned project to ‘rehabilitate’ I-5, which has become a major artery in Western Washington’s transportation infrastructure since it was built in the 1960s. Back then, officials expected it would hold up for 25 years before repairs were needed.

Instead, the highway held for more than 50 years, but is beginning to show its age and is in need of more major preservation work. 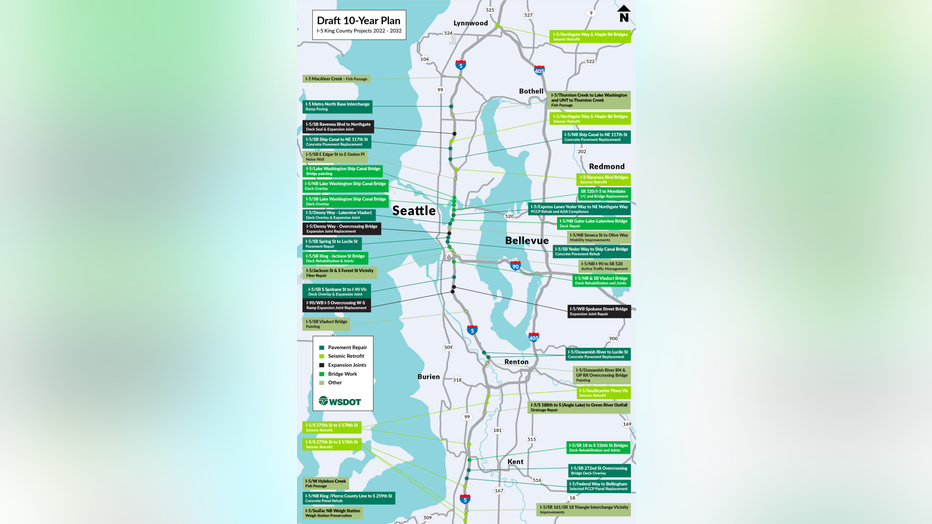 Work from I-90 to Spokane St represents just a fraction of all the projects across I-5, which among several other projects include:

The list is extensive, and WSDOT currently has these projects slated to finish by 2032.

There are also other significant closures the weekend of May 20: