"An attack on one is an attack on all," the governor said a day after a gunman killed 10 people and injured 3 others in a racially motivated attack.

GETZVILLE, N.Y. - The retired police officer who was shot and killed while trying to stop the gunman in a racist attack at a Buffalo supermarket May 14 was awarded the department's medal of honor at his funeral Wednesday, as the country processed another massacre at a Texas school that killed 19 children and two adults.

"Aaron bravely fought evil that day," Gramaglia said at The Chapel in Getzville, where law enforcement officers from U.S. and Canadian departments filled a dozen rows.

Services were also held for Pearl Young, a 77-year-old grandmother, great-grandmother and substitute teacher who was devoted to her church. 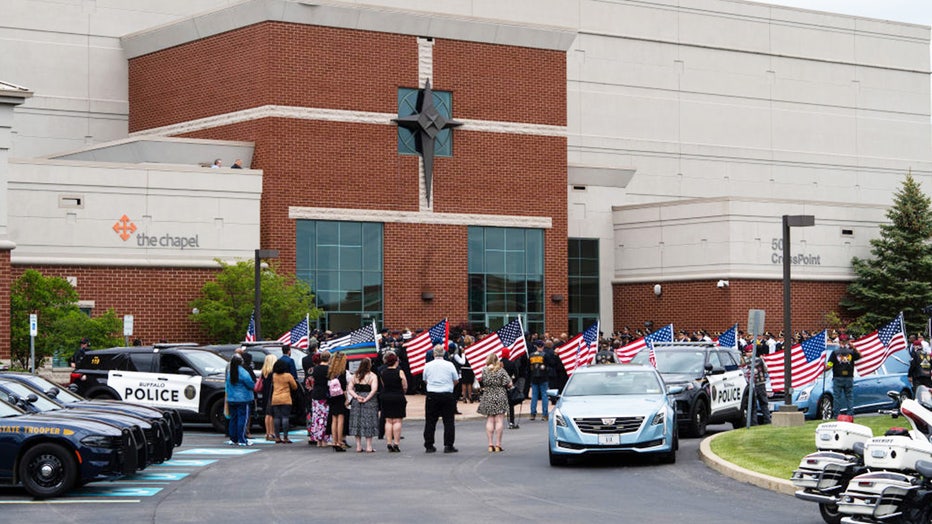 Members of The Patriot Guard Riders encircle the casket of Aaron Salter Jr. with American flags as it exits The Chapel at Crosspoint on May 25, 2022 in Buffalo, New York. (Joshua Thermidor/Getty Images)

Salter and Young were among the 10 Black people killed when a white gunman wearing body armor and a helmet-mounted camera targeted shoppers and workers at Tops Friendly Market, in a predominantly Black neighborhood, on a Saturday afternoon. Three others were injured in the attack, which federal authorities are investigating as a hate crime.

The 18-year-old suspect, Payton Gendron, of Conklin, has been charged with murder and is being held without bail.

Gendron was in a Buffalo City courtroom with his attorneys Wednesday to ask a judge to bar Erie County prosecutors from commenting about the case to avoid influencing potential jurors. The judge did not immediately rule but told attorneys to refrain from speaking publicly until prosecutors and defense lawyers meet to discuss guidelines going forward, The Buffalo News reported.

Salter, 55, of Lockport, was working as a security guard at the store in his retirement, a natural move for the community-minded officer with a loud laugh that "would shock your senses" and who chewed bubble gum just as loudly, said retired Deputy Police Commissioner Kimberly Beaty, who worked with Salter.

"Aaron didn’t come to work to be entertainment, he came to do his job," Beaty said, "but we enjoyed watching him do it."

Salter retired from the department in 2018 after nearly 30 years. At least one of his bullets struck the suspect's armor-plated vest but didn’t pierce it, police said.

Mourners remembered Young as a God-fearing woman and cherished friend. She was a longtime volunteer in her church's soup kitchen and worked as a substitute teacher in Buffalo Public Schools.

"Her name is beautiful, just like a beautiful pearl," Young’s oldest sister, Mary Craig of Tuscaloosa, Alabama, said during the service held at Elim Christian Fellowship in Buffalo.

She used these adjectives to describe her late sister: precious, exuberant, adorable, righteous and loving. The first letter of each spells out the name Pearl.

"She was excited to return to the classroom and enjoyed working with the high school students. Pearl was a hard worker and dedicated to the students she served," Williams said, reading from the letter.

Young and Anderson attended a prayer breakfast together the day of the supermarket shooting. Anderson said they felt a "spiritual high" that morning.

"It was one of the most glorious times that I’ve had in a long time," she said.

After the breakfast, Young asked Anderson to drop her off at Tops Friendly Market so she could pick up a few things. Anderson said she believes just a few minutes passed, after she pulled away to drive home, before the gunman opened fire. Anderson said she felt survivor’s guilt but has leaned on her faith to cope.

"I’m going to sorely miss her, but I know that one day, Pearl and Gloria are going to be back together again," Anderson said.

Funerals had been held for barely a few of the Buffalo victims, before yet another mass shooting grabbed headlines. Authorities in Texas say Salvador Ramos, 18, attacked Robb Elementary School in Uvalde on Tuesday, opening fire with an AR-15-style rifle. Nineteen students and two teachers were killed. Police killed Ramos.

In Buffalo, a funeral for 62-year-old Geraldine Talley is scheduled for Friday. Ruth Whitfield, 86, will be laid to rest Saturday. The Rev. Al Sharpton is scheduled to deliver those eulogies.