DEL RIO, Texas (Border Report) ⁠— Tiffany Zook is the wife of a U.S. Border Patrol agent. Since March, she has watched her community in far southwest Texas struggle to help an onslaught of migrants. They’re from many different countries and speak many different languages, including Spanish, Creole and French.

Busloads of upwards of 60 migrants had been dropped off at a gas station in the center of town. Migrants who were penniless and disoriented began to wander about, uncertain of how to get to their next destination.

“Border Patrol came to the faith-based community and let us know of the need that they were going to have to drop them off in the community,” Zook said.

These migrants had been processed by Border Patrol, U.S. Customs and Border Protection officials and had been legally released to await their asylum hearings.

The City of Del Rio leased them a building at a discounted rate. Samaritan’s Purse set up air-conditioned tents for migrants to eat, and for the men to sleep. Fifty cots were set up inside and an overflow building was opened up for women and children. Bassinets were provided for babies and the Southern Baptists of Texas Convention Disaster Relief Ministry put a shower truck in the parking lot.

At the height of the surge, in May and June, Zook said there were upwards of 200 migrants per day coming through this respite center, where they received food, shoes, clothes, a shower, could take a nap and got help with transportation to other cities.

But on Sunday, as Border Report got a tour of the make-shift compound, there were only two migrants on site.

Zook told Border Report it is because on Tuesday the U.S. Border Patrol began implementing Migrant Protection Protocols, which is an immigration policy that has been in effect in other parts of the Southwestern border and Texas. The policy requires migrants to wait in Mexico for their asylum hearings.

So rather than dropping migrants at their center on Las Vacas Street on the north side of town, agents and CBP officers are driving the majority to Laredo where they are sent to Nuevo Laredo, Mexico, to wait for their court hearings.

Zook said that Border Patrol officials notified the Coalition of the changes.

Border Report reached out to Customs and Border Protection to ask if MPP had officially been started in this area, but have not heard back from agency officials. 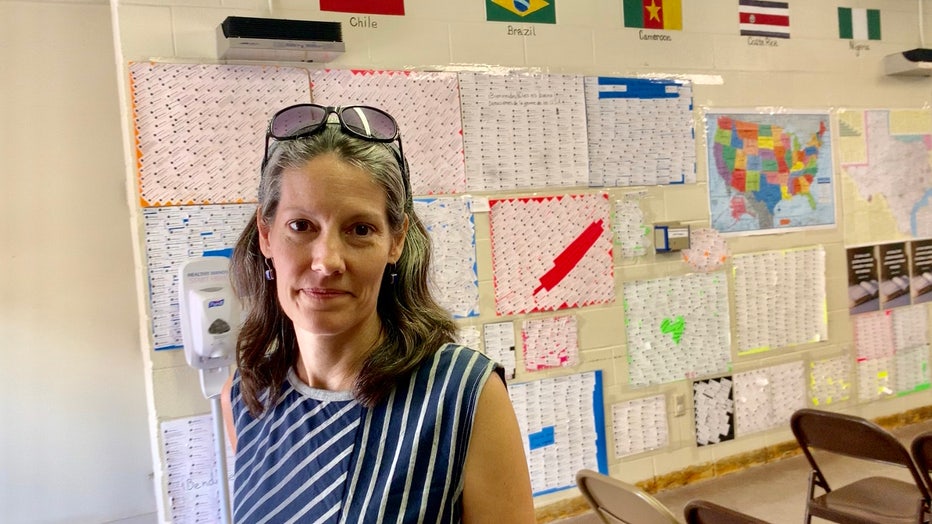 Tiffany Zook, who is on the board of the Val Verde Border Humanitarian Coalition, stands on Sunday, Sept. 29, 2019, in front of a wall plastered with Amazon wish lists and supplies that were sent by donors and volunteers from across the country to th

MPP’s effect on shelters across the Southwest

MPP, commonly known as the “Wait in Mexico” policy, began on July 17 in Brownsville, Texas, and has resulted in about 600 migrants sleeping in a tent encampment in Matamoros, Mexico.

Read a Border Report story on migrants in Matamoros.

In communities along the Southwest border, as MPP has been implemented, humanitarian shelters, like this one in Del Rio, have seen their numbers decrease. In some instances, they closed because there was no longer a need on the U.S. side.

In McAllen, Texas, for instance, where 700 to 1,000 migrants were helped per day at Catholic Charities of the Rio Grande Valley’s Humanitarian Respite Center as of August, there are now barely a handful of migrants showing up — a result of MPP instituted in mid-July in the region. 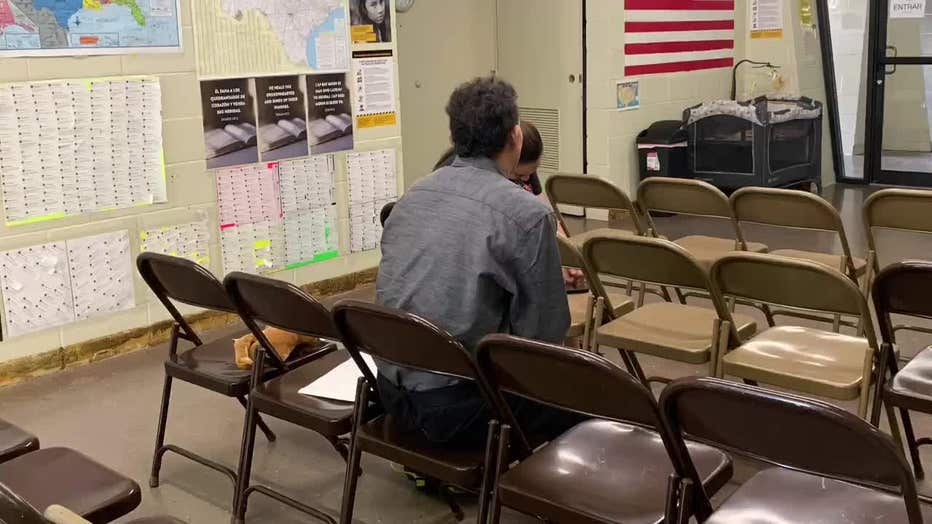 A migrant is helped by volunteers on Sunday, Sept. 29, 2019, at the Val Verde Border Humanitarian Coalition’s humanitarian respite center in Del Rio, Texas. He was only one of two migrants at the center that day; four months ago the center was receiv

One gentleman sat in the intake area as volunteers talked with him and helped him to make travel arrangements. Border Report was not allowed to photograph his face.

The numbers were so low this past week, Zook said, that when Border Patrol agents dropped off a woman who was six months pregnant at the center, Zook took her to her own home so she wouldn’t be alone there. The woman was elated to have been one of only 21 apprehended in a group by Border Patrol agents who was released in the United States, Zook said.

“She felt lucky and excited,” Zook said, adding that the coalition helped her get transportation to meet her sister in Baltimore. 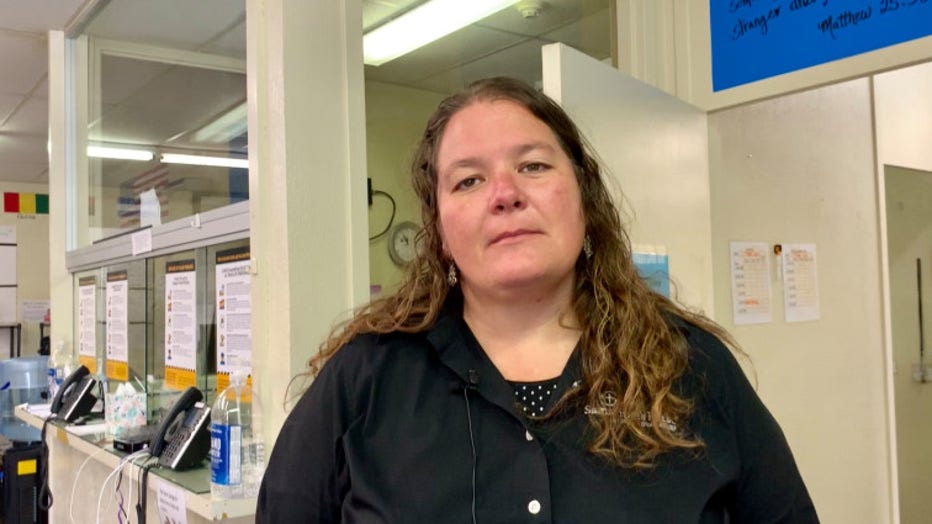 Whether the Del Rio respite center will stay open “all depends on the migrant flow,” said Shannon Daley, program manager for Samaritan’s Purse Disaster Relief. Daley was at the center on Sunday, Sept. 29, 2019, when there were only two migrants, down

When asked if the Coalition’s center might soon close, Shannon Daley, program manager for Samaritan’s Purse Disaster Relief said: “That all depends on the migrant flow. It’s a very big unknown of what that will continue to look like. At this point in time, they’re not anticipating this will close but time will tell that.”

The center’s pantries are full of canned goods. There are 13 cases of sneakers that were sent to them by a church in Val Verde and the air-conditioned tents sit empty, just pumping electricity. 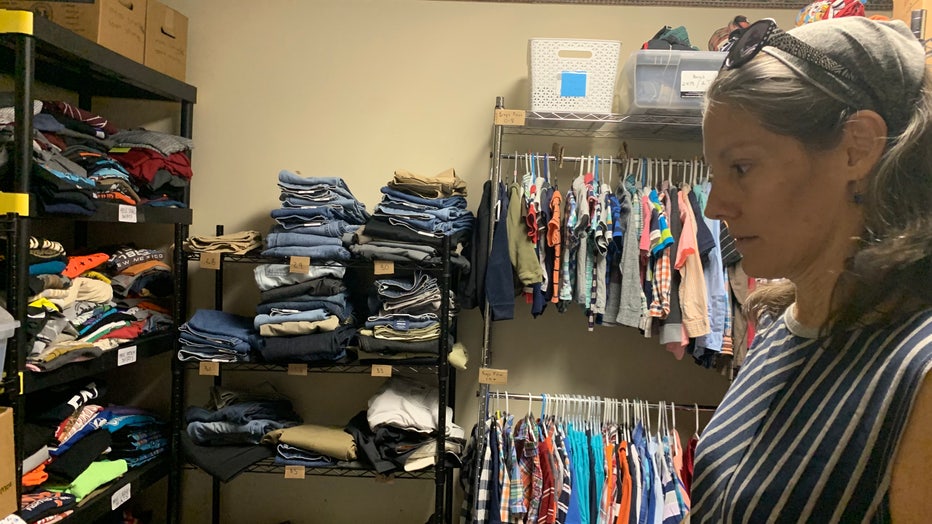 Tiffany Zook, a board member of the Val Verde Border Humanitarian Coalition’s humanitarian respite center in Del Rio, Texas, on Sunday, Sept. 29, 2019, looks at the stacks of clothing they have. Only two migrants came to the shelter on Sunday. (Borde

The City of Del Rio has spent so far this year more than $25,000 to help the center, including replacing the air conditioning unit, repairs to the building and on overnight police and firefighter security personnel, the mayor’s office told Border Report.

This is a far cry from six months ago when “we were begging, borrowing, and stealing, just getting it from friends and family,” Zook said. “It was a mess.”

Zook said volunteers took migrants to their homes to shower back then and let them sleep at the Del Rio City Church’s mission house. 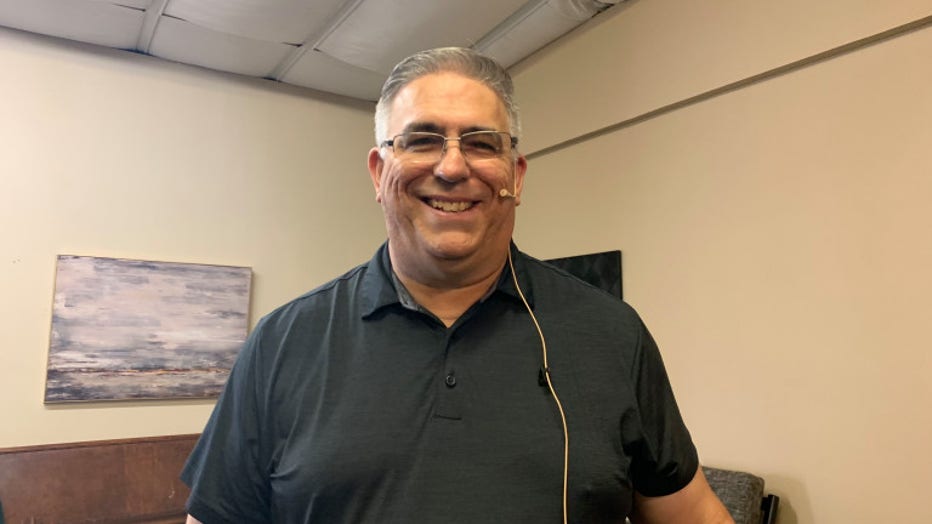 Sunday happened to be Floyd’s last Sunday preaching. He is moving to El Paso where he has taken a different job.

During an emotional farewell church service, during which parishioners streamed to the front of the church to give Floyd hugs, he reiterated during the sermon the importance of “leaving a legacy.”

This is how he has helped so many people, Zook said, after the service.

Christy Caldwell, a volunteer with Samaritan’s Purse who paid for her travel from Gulf Shores, Alabama, to Del Rio, is on her second tour to help at the center. She attended the Sunday church service along with several other volunteers from Samaritan’s Purse. “It’s just amazing to see God’s work here,” she said. 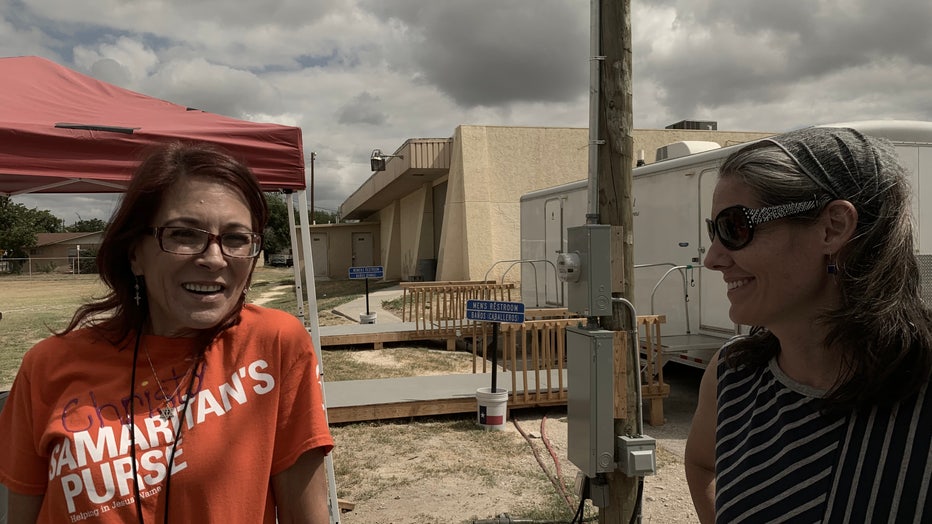 Christy Caldwell, of Gulf Shores, Alabama, came to volunteer on Sunday, Sept. 29, 2019, at the Val Verde Border Humanitarian Coalition’s humanitarian respite center in Del Rio, Texas. She speaks with Tiffany Zook, who is on the coalition’s board. (Bo