Massive trees came down Friday and Saturday as a storm swept through the Lake Stevens area, with neighbors saying it sounded like a "war zone".

LAKE STEVENS, Wash. - Massive trees came down Friday and Saturday as a storm swept through the Lake Stevens area, with neighbors saying it sounded like a "war zone". 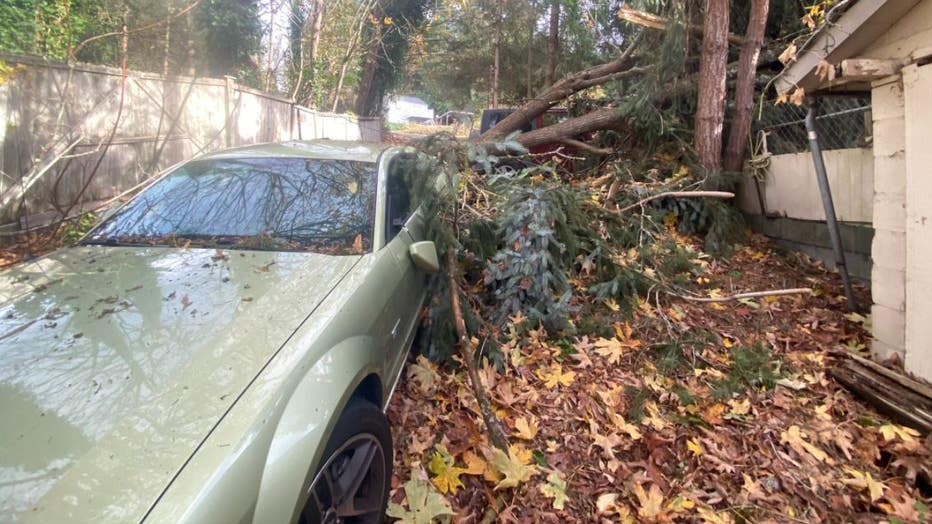 His car was damaged by a tree in his driveway in Lake Stevens. Holgren says it was "raging" when the wind and rain brought down a branch from a large Maple tree, nearly destroying his prized 2006 Mustang.

"The mirror is off. I'm sure there are dents in the paint, and this was pristine," he said. "It kills me."

Holgren's Jeep was also damaged when the tree fell. The huge Maple snapped just off of Vernon Rd, where a number of trees were down, blocking the road. Not far from where Mick lives, a giant tree also fell on a house and remained there, propped on its side Saturday afternoon.

"If I would have heard it coming down, I would have said, ‘I’m in a war here’. You know, it’s Armageddon," said Kay Mullins, who lives in Lake Stevens.

Another massive evergreen was uprooted off 99th Ave NE. It's massive root system was yanked from the earth. The tree nearly missed a row of homes and miraculously spared a line of mail boxes. Kay's neighbors compared the crashing trees to gunfire.

"I think it’s absolutely crazy," said Kay. "It was like gunshots were going off."

A few miles away on N Davies road, those out getting their exercise had to walk around downed trees and pick their way through downed utility lines.

"You got to keep going, you have to get your miles in," said John Rochon, an avid walker and resident of Lake Stevens.

John says the power in his neighborhood went out at around midnight.

He says most people in the area were without power this morning.

"This totally shocked me because I heard there was a wind warning, but nothing like this it was howling yesterday," said John.

Nearby traffic lights were also dark on busy Highway 9. Drivers were doing their best to be patient and make their way through the intersection at 204.

"Power is out everywhere. The windstorm hit everyone really good. The worst part about it is since all the lights are down, everyone has got to take turns coming through intersections. No lights are up. It’s a little bit of a mad house," said driver Cody Hemmingsen.

Cody had to turn around and reroute due to a downed tree on N Davies. He said many businesses were without power and remained closed Saturday morning.

"Only one store has power. That’s where everyone is getting gas. I had to wait 20 minutes to get gas this morning," said Cody.

Trees also took out lines at 42nd where downed lines were hard to see before daybreak. A tree blocking Lundeen Park Way had to be cleared before traffic could flow through that area as well.

Mick Holgren says despite the hassle he now has to go through to fix his vehicles, it could be worse.

"The main part of the tree fell in between the two vehicles. I got lucky there," he said.