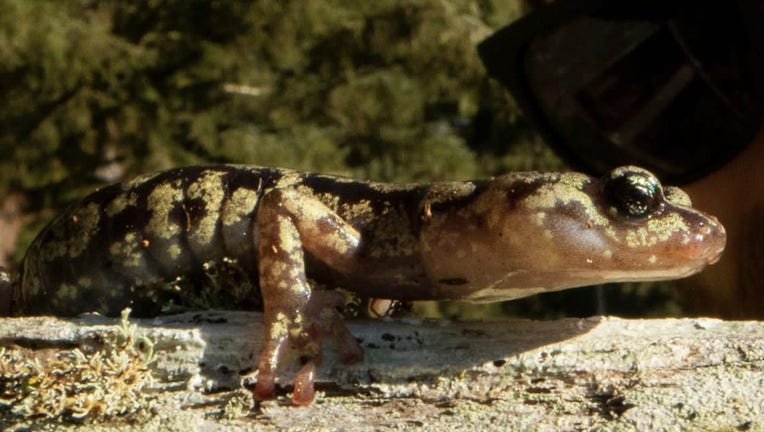 A new UC Berkeley study discovered the aerodynamic skills possessed by the wandering salamander which allows the species to glide and parachute from California's coast redwood trees. (Credit: Christian Brown)

Now, a fascinating, new UC Berkeley study has revealed that the amphibians have developed incredible gliding and parachuting skills in the adaptation process to survive in the towering canopy of the redwoods.

The salamanders, whose scientific name is Aneides vagrans (or A. vagrans), have been known to travel by jumping from tree to tree. The risks are grave when considering a fall from some 300 feet above ground. Those dangers have resulted in "the evolution of diverse aerial behaviors," according to the study published Monday in the journal Current Biology.

Researchers discovered the animals have adapted to parachute with incredible aerodynamic skills, and were able to do turns, flips and even hold well-controlled horizontal gliding postures.

The study was conducted by UC Berkeley biologists in partnership with Christian Brown, a University of South Florida doctoral candidate and first author of the paper. As part of their research, they created a vertical wind tunnel to simulate what would be a drop from natural heights. They tested A. vagrans as well as three other salamander species and dropped the animals into the wind tunnel.

Their findings were unexpected, as they discovered wandering salamanders were able to maintain highly controlled gliding positions by adjusting their limbs and tail.

"In all 45 trials, A. vagrans exhibited control in pitch, roll, and yaw from a skydiving posture such that dorsoventrally stable body postures were maintained," researchers explained, adding that the wandering salamanders held their skydiving positions significantly longer than the other species.

WATCH: Salamanders parachute in the wild

Incredibly, A. vagrants were also able to effectively decelerate in all 45 trials, slowing their vertical speed by up to 10% while falling, according to the study.

Researchers noted, what's more remarkable was that the animal does not possess obvious aerodynamic characteristics, lacking skin flaps and other wing-like features. Researchers said that the animals do have "unusual morphology that could lend to aerial performance."

They pointed to features that have likely adapted to benefit the salamander’s ability to effectively maneuver successful skydives.

"The large feet and long toes of A. vagrans seem to form ventrally concave surfaces while parachuting, and may serve to produce useful lift and drag," the study said, adding, "Relatively long limbs position the feet distant from the center of body mass, suggesting the possibility for enhanced aerodynamic torque and adaptation for aerial maneuvering."

Researchers described the discovery of the salamanders’ aerial behaviors as "surprising" and said it called for further studies into other tree dwelling species that may have also evolved to display similar controlled aerodynamic skills.

They also hoped that the study would put a focus on the salamanders' canopy habitat among endangered, old growth redwoods, and bolster efforts to not only conserve California's redwood forests but restore them while rehabilitating canopy ecosystems.