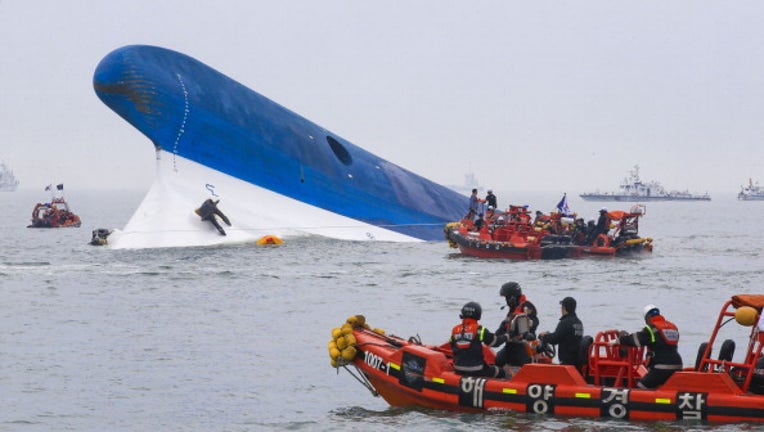 Guard work at the site of ferry sinking accident off the coast of Jindo Island on April 16, 2014 in Jindo-gun, South Korea. Four people are confirmed dead and almost 300 are reported missing.

SEOUL -- Military dive teams worked the dark, cold waters of the Yellow Sea on Wednesday night in a desperate effort to find nearly 300 people who are missing after the ferry they were taking to a South Korean island resort sank with breathtaking speed.

Officials said four people were known dead and 164 had been rescued after the sinking of the ferry Sewol off the southwest coast of South Korea.

Another 292 people are missing, authorities said. Among the 459 people who were aboard the ship: 325 students and 15 teachers from Seoul's Ansan Danwon High School heading to a four-day trip to Jeju, a resort island considered the Hawaii of Korea.

It was not immediately clear if the dead -- three males and a female -- were students or teachers, part of the 30-member crew or from the 89 other passengers on board the ferry.

The ship sank within two hours of its first distress call, which came just before 9 a.m., the semiofficial Yonhap News Agency reported. It's not known what caused the incident.

Rescued student Lim Hyung Min told CNN affiliate YTN that he heard a loud bump just before the ship began to list. Several off his classmates were flung off their feet. The crew ordered everyone to don life jackets and jump into the ocean, he said.

"I had to swim a bit to get to the boat to be rescued," he said. "The water was so cold and I wanted to live."

Passenger Kim Seung Mok said that despite his efforts and those of others, he couldn't get to several passengers on one of the decks.

"I stayed till the last to rescue people at the hall," Kim told YTN. "But the water was coming in so fast (that) some didn't make it out."

The U.S. Navy ship USS Bonhomme Richard, on routine patrol in the area, dispatched its helicopters to aid in the rescue and was headed to the scene, the U.S. Navy said.

Divers from the South Korean navy searched three of the 6,800-ton ship's compartments but found no survivors or bodies, Yonhap reported. Another dive team was expected to continue the search shortly, the news agency said.

At Ansan Danwon High School, parents clutched their cell phones in an agonizing wait for a call from their children. Officials posted a list of names. Once a confirmation of a rescue came, they circled that name.

At one point, the school announced that all students had been rescued but soon backtracked, to the parents' wrath.

What could have caused the ship to sink so rapidly remained a mystery. The weather was clear at the time of the accident.

Peter Boynton, a retired U.S. Coast Guard captain, said the speed with which the ship sank suggested it had sustained "major damage." He also said that if the ferry's car deck had been breached, it could have quickly swamped the ship.

Battling against darkness, cold, swift currents and trying to find their way through a damaged, upturned ship, rescuers are "up against every sort of obstacle," said David Gallo, director of special projects at the Woods Hole Oceanographic Institution.

"It's just an absolutely, positively horrific situation," he said. "It's nightmarish."