CHICAGO -- A fired executive of Chicago's beleaguered red light camera company alleges in a lawsuit that Redflex Traffic Systems doled out bribes and gifts at "dozens of municipalities" in 13 other states and says he is cooperating in an ongoing federal investigation.

The explosive allegations, accompanied by few specifics, suggest investigators may be examining Redflex's business practices around the country in the wake of the company's admission last year that its flagship camera program in Chicago was likely built on a $2 million bribery scheme.

According to Mynorthwest.com, Redflex installed multiple cameras in Lakewood and other Washington cities. Q13 FOX could not independently confirm this Monday. 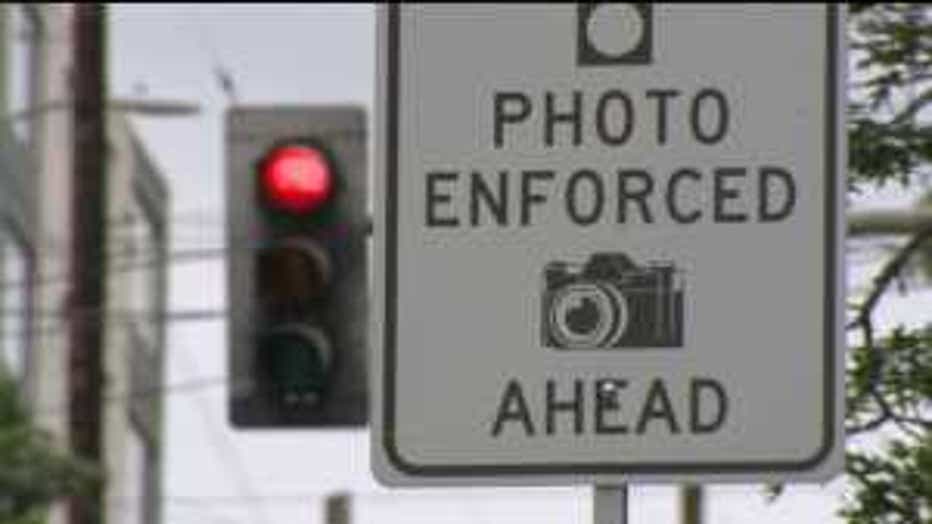 Aaron Rosenberg, who was the company's top national salesman, said in a civil defamation claim against Redflex that he was made a "scapegoat" to cover up a long-standing practice of "providing government officials with lavish gifts and bribes" after the Tribune began asking questions about the Chicago contract.

Redflex fired Rosenberg and sued him for damages in Arizona court in February, largely blaming him for the company's wrongdoing in Chicago. In a counterclaim filed in October, Rosenberg disclosed that he provided information to local and federal investigators as well as to the outside attorney who conducted a damaging private investigation of the company.

"I don't think it would come as a surprise to anyone involved in this case that my client is cooperating with federal authorities," James Burr Shields, who represents Rosenberg in the civil case, told the Tribune this week. He declined to elaborate.

Redflex filed a motion to dismiss part of his claim as legally deficient, and it declined to address the newspaper's questions about Rosenberg's specific allegations.

"Those responsible for violations of company policy and misconduct are no longer employed by the company. We are pleased that the market has responded favorably to our corrective actions and our continuing commitment to customer service: since March we have signed, renewed or executed over 90 contracts," Robert T. DeVincenzi, a board member and former CEO of Redflex Holdings Ltd., the Australian parent company, said in a statement issued by the company's North American headquarters in Phoenix.

Redflex lost its $100 million Chicago contract, its largest in North America, amid investigations triggered in 2012 by Tribune reports of a questionable relationship between the company and the longtime Chicago city official in charge of the red light program. But the company is still handling the city's red light camera operation thanks to a series of extensions while the city transitions to a new vendor.

The scandal prompted the company to jettison six of its top executives. One of them was Rosenberg, the company's former executive vice president. In its lawsuit, Redflex accused Rosenberg of a "protracted and covert scheme" to misappropriate company funds.

In his counterclaim against Redflex, Rosenberg said he was simply "carrying out orders" and that other company executives also participated in a "pattern and practice" of wooing potential clients with perquisites including meals, golf outings, professional football and baseball games — all covered under a liberal company policy for "entertainment" expenses.

"A budget for these items was approved, and there was never a distinction between these types of entertainments and expenses that are considered gratuities and bribes," Rosenberg alleged in the filing.

Rosenberg said that during his tenure Redflex "bestowed gifts and bribes on company officials in dozens of municipalities within, but not limited to the following states: California, Washington, Arizona, New Mexico, Texas, Colorado, Massachusetts, North Carolina, Florida, New Jersey, Tennessee, Virginia and Georgia."

Attached as exhibits in Rosenberg's pleadings are emails about a Redflex-funded $3,235.74 steak dinner during the 2006 Florida League of Cities conference that was attended by more than a dozen government officials who heard a Redflex pitch. In many jurisdictions, paying for meals is a permitted, though regulated, lobbying practice.

Redflex does not have contracts with many of the jurisdictions whose officials were identified in Rosenberg's exhibit. The company has more than 200 government clients around the United States. It has faced scrutiny from some of those clients and had its pitches rejected by other governments in the wake of the revelations.

The company acknowledged last year it was investigating further wrongdoing "in two other geographies" besides Chicago. A source familiar with the investigations confirmed that one of those places is Jefferson Parish, La., where parish officials shut down the red light program in 2010 amid a separate corruption scandal involving a lobbyist who worked for Redflex and numerous other clients.

Nothing in Rosenberg's filings help detail the allegations in Chicago now at the center of the federal investigation.

Rosenberg was named in a 2010 internal whistle-blower memo obtained by the Tribune that alleged widespread wrongdoing at Redflex, including a scheme to bribe a former top manager in the Chicago Department of Transportation with company-paid vacations on Rosenberg's expense account and through lucrative commissions paid to a consultant.

Redflex executives played down the letter in their response to initial Tribune inquiries and declared that a "deep dive" internal investigation found only one problem — Rosenberg used the company tab to cover a $910 hotel stay in 2010 at the Arizona Biltmore for the Transportation Department manager, John Bills. The company said it reprimanded Rosenberg and sent him to anti-bribery training but erred in not telling City Hall about the inappropriate gift.

That's when everything began to unravel for Redflex. Mayor Rahm Emanuel banned the company from competing for a new speed camera program and ultimately fired it as the red light vendor. Redflex fired Rosenberg amid a second internal investigation that found the company had misled city ethics officials and the Tribune about its problems.

The report, by former federal prosecutor David Hoffman, found that Redflex paid more than $2 million to its Chicago consultant Marty O'Malley in an arrangement that was probably intended to funnel some of the money to Bills. Rosenberg and former company CEO Karen Finley acted improperly in allowing the highly suspicious arrangement, which "will likely be considered bribery by the authorities," Redflex said in its summary of Hoffman's findings.

The investigation also found the company violated Chicago's ethics ordinance by paying for 17 trips for Bills, including hotel, airfare, rental cars, meals and golf outings, most on Rosenberg's expense account.

Finley did not return calls for comment. Bills and O'Malley have denied any wrongdoing. Their lawyers declined to comment.