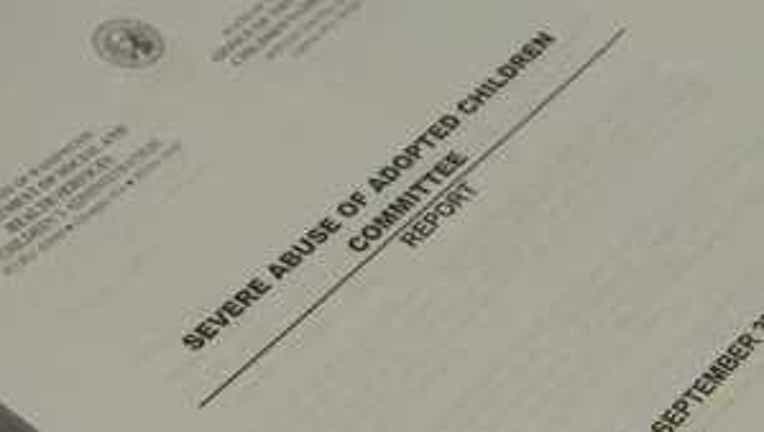 SEATTLE -- A report on abused adopted children has concluded that, for the most part, adoptive families in Washington state provide nurturing, loving homes. But the study also said there are problems that need to be addressed.

The study, Severe Abuse of Adopted Children Committee, was sent to Gov. Chris Gregoire. It concluded there is inadequate oversight of adopted children and not enough education and licensing of private adoptive services.

The committee was appointed after a series of horrible cases of abuse, neglect -- even death -- of adopted children in the state.  Members found the adoption system lacks sufficient safeguards to protect children from potentially dangerous homes.

The committee looked at more than a dozen cases, including that of 13-year-old Hana Williams, who was adopted from Ethiopia and who froze to death last year outside her Sedro-Woolley home.  Investigators found her adoptive parents left her outside as punishment.

“While there are common elements, each of these (abuse) cases is unique and we are not able to identify a single factor or factors in the adoption process that would have protected these children from harm,” the report says. “By reviewing these cases however, we learned of areas in our adoption process that could be strengthened to protect children from risk, such as:

“Requiring adoption home studies and post-placement reports to include full information, objectivity and a critical assessment of the adoptive family;

“Requiring prospective adoptive parents to have adequate education, training and preparation to adopt a child;

“Improving supports and services that will strengthen adoptive families.”

In the report’s opening letter to Gregoire, the committee said, “While cases of severe abuse and neglect of adopted children are not unique to Washington state, our state is in the forefront of efforts to strengthen the adoption process to address this issue.”

Mary Meinig, of the Office of the Family & Children’s Ombudsman who co-authored that letter and the report, said in an interview Tuesday, “All of these kids are our responsibility, when we know of them and when we can intervene to help them.

“We need to do better, especially maybe with private agencies and communities, to help link up those families with resources in the community,” she said.

Cathy and Terry Anderson are proud parents of two 11-year-old boys they adopted from Russia, Ethan and Joel, but said the adoptions didn’t come without challenges, especially since one boy only spoke Russian.

“He would melt down for no reason, and cry for an hour and cry in the grocery store,” Terry Anderson said Tuesday, “and we wouldn`t know why. But he would sit there and he would cry, and that was difficult. When you love your child and you don`t know what`s causing the pain, where do you turn?”

The Andersons said if it weren`t for post-adoption support from the adoption agency, they wouldn't have known what to do.

The report only offers recommendations to fix the system, but clearly indicates that better training, supervision and adoptive families follow-up will help.

Meinig said there were about 1,862 state adoptions in 2011, but she added there are no numbers for private adoptions because the state does not track those.

“In order to implement the majority of these recommendations, it is essential that CA (state’s Children’s Administration) develop a detailed work plan, approved by the assistant secretary, identifying a strategy to carry out these reforms," the report says.

The authors said “many” of the recommendations can be made through the CA department’s rule-making authority, but that other recommendations, such as addressing minimum qualifications for individuals conducting home studies and post placement reports, may require amending state law.