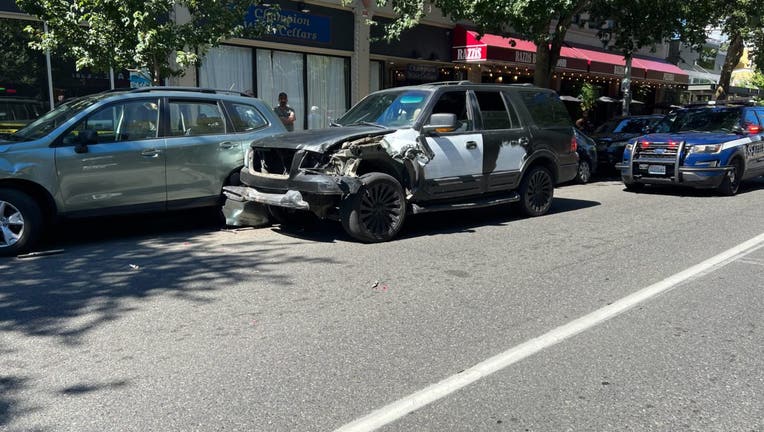 SEATTLE - The man accused of sexual assault and who Seattle police arrested after a pursuit earlier this week has been charged with rape and kidnapping.

On Aug. 29, Seattle police officers responded to a report of a sexual assault on Aurora Avenue North.

Investigators said a woman reported that she was dropped off at the Oak Tree Plaza and as she was walking towards the motel, two unknown men approached her and allegedly started harassing her.

A man, who was later identified as 32-year-old Maygag Ali Warsame, drove up to the group and asked the woman if the men were bothering her and if she needed a ride. She then got into the car after the men continued to follow her.

Seattle Police have arrested a man suspected of sexual assault after he allegedly led officers on a chase throughout north Seattle on Monday.

Investigators said the woman noticed Warsame was driving the wrong direction, and he took her to a gas station. She told police that he showed her pepper spray and two different guns after "he kept telling her she needed protection working out here."

According to prosecutors, he told the woman that "his boys would kill her if she tried to escape."

Court documents said Warsame drove into an alley near another gas station, where he sexually assaulted the woman.

Hours later the woman was able to run away and went inside a nearby Starbucks where she told the employee about the assault. And when the employee went to look for the car, it was gone.

According to probable cause documents, when Warsame came back to the area, he drove away after seeing officers.

Police attempted to pull Warsame over, chased him but his car crashed, and he was taken into custody. The woman was able to positively identified Warsame.

Officers at the scene found a gun in his car.

According to King County prosecutors, Warsame has a criminal history which includes convictions, and many of them are violent or involve assaults.

He is schedule to be arraigned on Sept. 8 at the King County Courthouse.