A Renton Police officer was arrested in Des Moines over the weekend for reportedly assaulting a confidential informant while he was "heavily intoxicated."

DES MOINES, Wash. -- A Renton Police officer was arrested in Des Moines over the weekend for reportedly assaulting a confidential informant while he was "heavily intoxicated."

According to police reports, the officer -- who has not been formally charged -- texted the woman in the early morning hours of Aug. 10 and said she needed to meet him to discuss her case.

When she arrived, he allegedly drank wine with her at a picnic table in a neighborhood park in the 1300 block of South 250th Street, telling her that she should keep drinking so he "could get the answers he needed for the case."

After a couple of hours of drinking wine, the officer asked her to take off her clothes, then reportedly slapped her repeatedly until she ran away.

Police say the woman knocked on the door of a house on 16th Avenue South and screamed until someone opened the door.

When Des Moines officers got to the house, the suspect reportedly told them he was a police officer and that "she's my CI."

"(The suspect) was heavily intoxicated and wearing an inside out T-shirt and shorts and no shoes," police records state.

He denied assaulting the woman, but then later said he wouldn't provide a statement until he spoke to his guild representative.

The Renton officer was arrested for assault and has been placed on leave from the Renton Police Department. Q13 does not typically name suspects until they are charged.

The Renton Police Department released the following statement in response to the allegations: 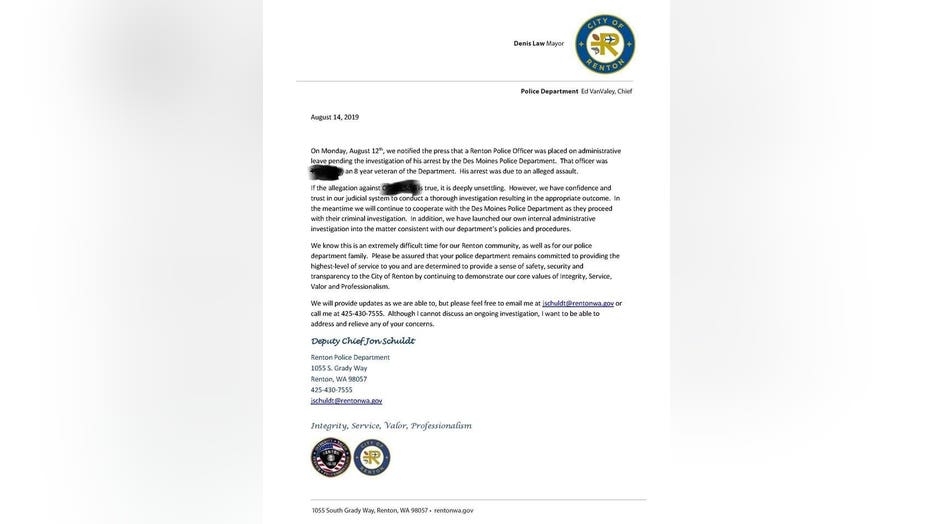