Emergency managers have already warned that mudslides are likely sometime in the next few years after the wildfire burned up root systems and decimated the steep terrain above communities near Skykomish and Grotto.

SEATTLE - Those who live near the Bolt Creek burn scar are getting used to being worried.

Emergency managers have already warned that mudslides are likely sometime in the next few years after the wildfire burned up root systems and decimated the steep terrain above communities near Skykomish and Grotto.

If the current forecast holds, that area will see a good amount of snow Tuesday followed by a rain-snow mix on Wednesday.

Locals have already taken FOX 13 News crews up above their homes where holes, or "pockets," have opened up beneath large burned out trees. 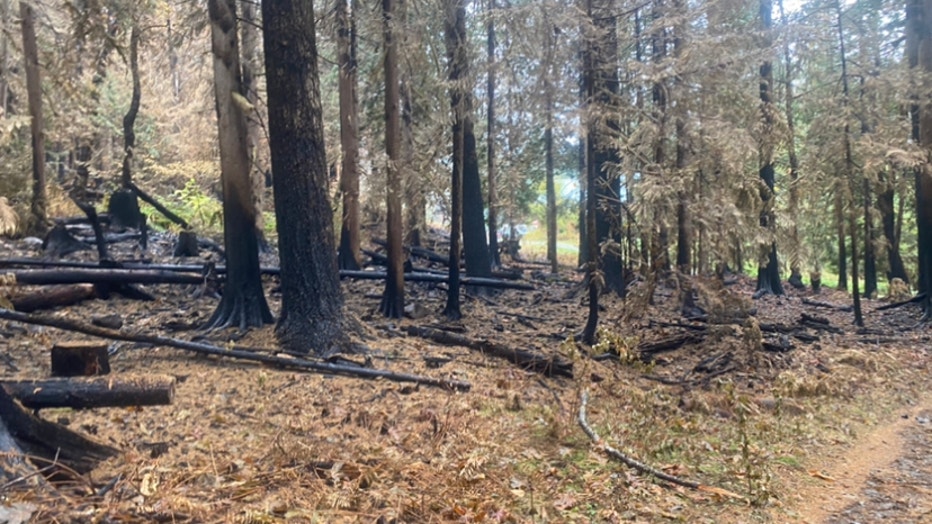 The forest, and the soil will take time to return to normal – though there are options to speed up the natural processes.

SilvaSeed, one of the oldest seed companies on the West Coast, has been cultivating seeds for decades. Recently, they became part of a larger company – DroneSeed – which has added to the group’s reforestation efforts dropping seeds surrounded by nutrients into hard-to-reach areas that have been decimated by wildfires to boost growth.

This week, FOX 13 had a chance to meet with Kea Woodruff at SilvaSeed’s greenhouse in Pierce County. Surrounded by thousands of Douglas Fir seedlings, Woodruff explained that we’re in a concerning time when it comes to cultivating seeds.

"I think a lot of people don’t know the fact that our seed resource is not that secure," she explained. "You can’t go to the hardware store and buy Douglas Fir seeds for forests. They have to be collected by people actually going into the wild and collecting cones the way it’s been done for over 100 years – these are not grown in a lab somewhere."

Back in April, President Biden raised the alarm about the shortage of seeds in the U.S. and the need to boost this type of work during his visit to Seattle’s Seward Park. A slew of issues are taking their toll on national forests: wildfire, insects and climate change.

Destructive fires have burned too hot for forests to quickly regrow in some instances – creating a backlog of millions of acres that need re-planting.

According to Woodruff, operations like DroneSeed offer other benefits: oftentimes when forests re-grow plants that out-compete the species that once stood can change the makeup of a forest.

DroneSeed measures what is left after a fire and looks at the natural makeup of species before ultimately planting – sometimes by drone, other times with traditional boots-on-the-ground crews that can plant native species.

"When nature is able to come in, we want to facilitate that as well – obviously, we’re in favor of natural regeneration where it would occur, but this offers a supplement."

One issue that areas like Bolt Creek will face moving forward, is that re-growth is also at the mercy of Mother Nature. Extreme weather, drought and mudslides can all affect attempts to plant trees.

For those living near the Bolt Creek burn scar, nothing will eliminate the tough winter that lies ahead – Spring is months away, and the threat of landslides that can block off emergency crews for days at a time are on the minds of many.

The Bolt Creek fire may be out, but the pain it left behind is far from over.