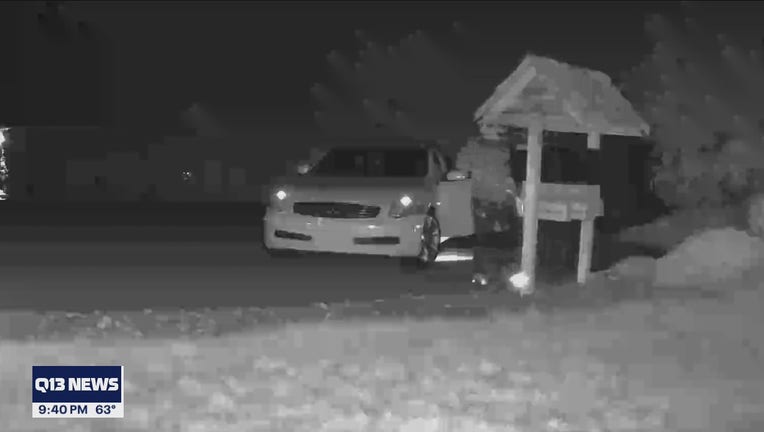 REDMOND, Wash. - Identify theft is a big concern for one community in east King County after someone broke into several mailboxes. And it’s not the first time the neighborhood has been targeted.

While everyone was asleep, a surveillance camera recorded a car pulling up to a group of mailboxes in Redmond. A man got out of the car to help himself to mail that did not belong to him.

"We’ve been hit four times, that’s a lot and it’s the same person. So, he knows that he is going to hit some kind of payday if he comes into our neighborhood," said a woman who had her mail stolen.

She asked for her privacy because she is worried about identity theft and retaliation. The woman and her neighbors set up more surveillance cameras to catch the thief targeting their community.

"Anger, frustration and also resigned. Like, oh my gosh, he’s not going to give up until we catch him. So, that’s why I’ve filed police reports, I’ve gone to the post office, I’ve talked to my neighbors, I’ve set up cameras because I kind of just want to catch this guy at this point so that nobody has to go through what we have to go through," said the woman.

Each mailbox in the neighborhood is locked. Surveillance video shows the man opening the outgoing mail door on the box, and then using a tool to pick the lock from the inside.

"You know when he’s been here, all the mailboxes are opened. There’s just mail strewn all over the streets," said the woman. "He stole an ATM card from one of our neighbors and then proceeded to withdraw quite a significant amount of money from their bank accounts from a credit union."

"You’re seeing our neighborhood come together in ways that we haven’t in a long time," said the woman. "We’re all kind of banding together with cameras and, ‘Hey did you hear this?’ It’s that whole if you see something, say something."

The sheriff’s office said mail theft is a crime of opportunity where thieves will hit several communities countywide. Investigators said 20 mailboxes and two mail banks had items stolen in the Ames Lakes community in late May.

In case the thief strikes again in Redmond, the woman said she and her neighbors acting now to protect their personal information.