SALEM, Ore. (AP) — Reindeer are supposed to pull Santa Claus' sleigh, but in Oregon recently, a red-suited man on a sled wound up pushing a deer.

The reverse-reality Christmas-season tale played out when a deer wandered onto a frozen golf course pond in Sunriver, Oregon, on Friday and then lost its footing.

Try as it might, it couldn't get all its legs underneath him. It skidded and slithered, and its legs buckled.

Along came firefighter Jeff "JJ" Johnston, astride a new ice-rescue sled that was as bright red as the suit he wore, and as the nose on Rudolph the reindeer, which guided Santa's sleigh one foggy Christmas Eve.

Benjamin O'Keefe, a captain in the fire department of the resort and residential community, had his camera rolling. His video has become a sensation, garnering millions of views and picked up by broadcasters in the United States and overseas.

The young deer's hind legs began pumping, but it couldn't get up on its front legs. It was on an icy treadmill, going nowhere.

Johnston got close, spoke calming words to the deer and — slipping a bit himself as a tried to gain traction — gently pushed it with the front of the sled to the edge of the pond. Even then, the deer needed some coaxing. It seemed to have enjoyed the slippery ride.

Johnston tapped it on the head with the back of his gloved hand, then scratched the top of its head and ears, like you'd pet a dog.

The deer tried to get onto the sled before it turned around. Pushed once more to the snowy ground, it gained solid footing and, with a wave from Johnston, scampered off, presumably to join its mates in some deer games.

"JJ was talking to it the whole time," said Tammie Waters, office manager for the Sunriver Fire Department. "The deer played along pretty good."

It was the inaugural rescue mission for the sled, which was purchased with a grant from Firehouse Subs, a sandwich restaurant chain, she said. She hopes it never happens, but when someone falls through the ice or is stuck on thin ice, the sled will be put to use.

"It was a great way to get training, and rescue a deer," Waters said. 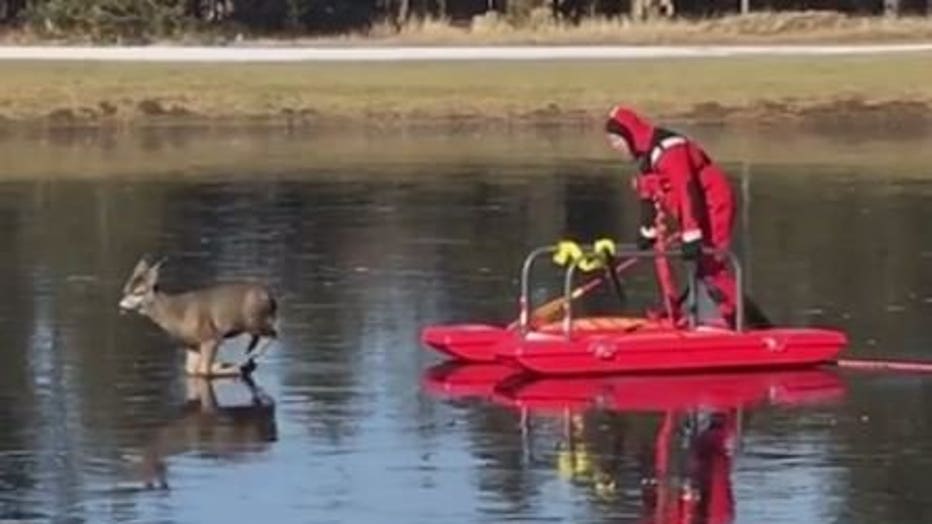