PHOENIX - Agents with the Drug Enforcement Administration say they have seized red meth in Arizona, an emerging trend and the first of its kind seen in the state in years.

The DEA says its bright color is just another way the cartels are trying to market their product. A similar "pink meth" was first found in 2007 but died down.

Now, it's starting to pop up in only a handful of states - the first here in Arizona.

"Red meth is the new trendy color, It's a new way to market, and it's a new way to sell something that is dangerous, deadly and poisonous," said Cheri Oz with the DEA. "It's really just the next way to try to sell to try and generate new customers and a broader, a broader base." 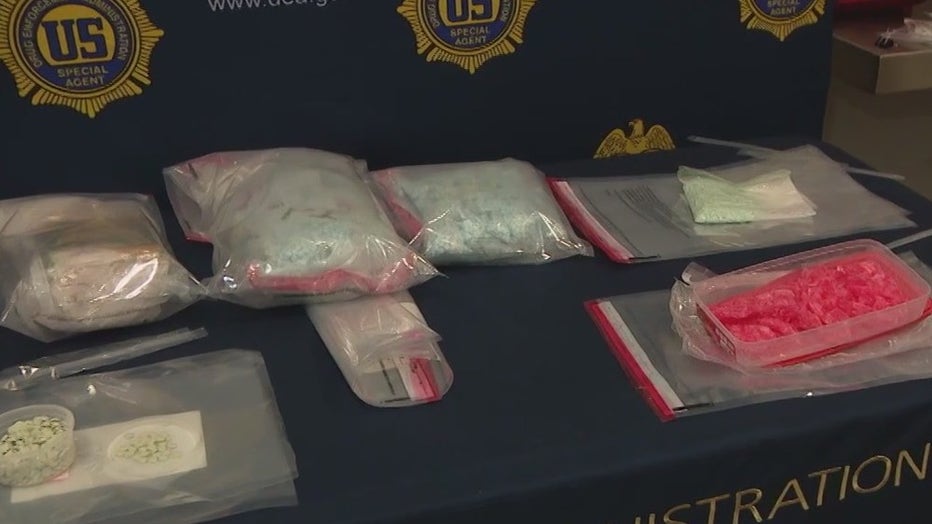 Everything seen in the table pictured above came from one operation. Agents say it came directly from the Sinaloa Cartel in Mexico, which then brought it up to Arizona.

"The Sinaloa Cartel is a poly drug trafficking organization, which means they traffic in any drug of opportunity," Oz explained. "So in this one load, we see fentanyl, there's MDMA, there's methamphetamine, cocaine and heroin. We'll see a lot of different drugs coming up in one load."

Meth and fentanyl make up the top two drugs they seize the most, keeping their agents busy 24/7 with no signs of stopping.

"The price of methamphetamines since the COVID crisis has plummeted. So which means we know that there is a lot more out in the world, which should be alarming," Oz said. "It's saturating the market right now."

Agents also found MDMA, or ecstasy in that seizure. The small pills have smiley faces imprinted on them.

DEA agents say they don't see a lot of it, but it's also dangerous and may look appealing to children.

"Something with a smile seems very safe to take," said Oz. "It is not safe. These pills are dangerous, dangerous and deadly. And for children to put something in their mouth that has a smile on it, that that terrifies me. Those kinds of things keep me up at night."

Officials say they expect to see more red meth throughout the next few weeks. It's a drug that causes serious long term effects. If you see anything suspicious, call police.

Continuing Coverage on the Opioid Crisis

Fentanyl crisis getting worse, according to DEA officials

Drug enforcement officials in the Phoenix area say Fentanyl is still on the rise, and Arizona is one of the main hubs for the drug. FOX 10's Stephanie Bennett reports.