Boaters fined for getting too close to southern resident orcas

NOAA has announced two fines for recreational boaters, including one – lowered to $2,700 after the boater admitted liability – after boaters were caught on camera operating too close to endangered Southern Resident orcas.

NOAA has announced two fines for recreational boaters, including one – lowered to $2,700 after the boater admitted liability – after boaters were caught on camera operating too close to endangered Southern Resident orcas.

The fines are a sharp reminder of the plight of the Southern Residents – a species at high-risk of extinction.

The fines were announced this week by NOAA, but are tied to boating incidents that occurred during Fall 2021 when whale watchers from shore spotted boaters driving dangerously around endangered orcas.

Washington law requires vessels be at least 300 yards from Southern Resident orcas. Boaters are also required to be at least 400 yards out of their path, or behind the whales.

Scientists are rushing to learn more information about noise pollution in our local waters, while more vessels are projected to travel the Salish Sea in the coming years.

Those rules are in place to protect endangered orcas from ship strikes, as well as, prevent vessel noise from disrupting the whales. Studies have shown that vessel traffic can drown out orca’s echo-location abilities, which they use to hunt meals. Females in particular have been stop foraging for fish, which can be detrimental to a population already struggling to survive – partly, because they are struggling to find food already.

"People can help us by spotting suspected violations and providing as much information as they can as soon as possible," said Greg Busch, Assistant Director of the West Coast Division of NOAA’s Office of Law Enforcement. "It is important for boaters to know the rules before they get on the water. The more people who know the rules and help identify violations, the better protected the whales will be." 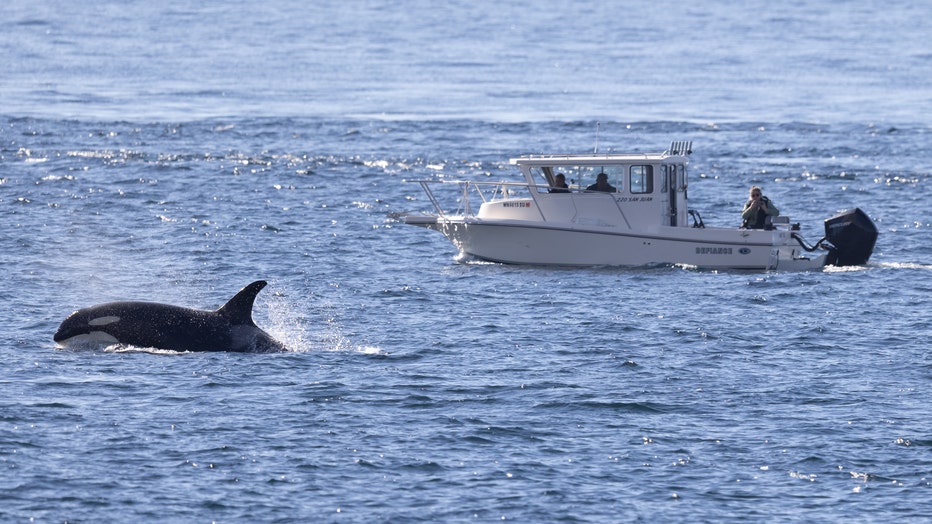 According to NOAA, a number of witnesses spotted a rental boat in early October 2021 with its engines on operating within 100-200 yards of an endangered orca. Officers tracked the boat to an Anacortes boating club – investigators learned that the renter was given information on regulations. He later admitted he did not look at that information.

Christopher Brawn, of Roslyn, was assessed a penalty of $3,000. He later admitted liability and got the penalty reduced to $2,700.

The Center for Whale Research confirmed on May 26 that the new calf born to the J Pod is a female, offering a glimmer of hope for the endangered Southern resident orca population.

Shields told FOX 13 she was tracking the orcas as part of her research, when she captured both the orcas and the boat on camera – the information was turned over to law enforcement leading to a $300 fine for Brendan Loesback, who resides in Entiat.

"It’s really important to remind people we all play a part," said Wieland Shields. "This was a really egregious violation of a boat repeatedly driving at speed, and at really close proximity."

Reporting violations is possible for anyone through BeWhaleWise.Org, a partnership of agencies and groups that promote viewing regulations. Photographs are especially important in helping enforcement officers identify boats, and boaters involved.

For more information on boating regulations in Washington state, and how they pertain to Southern Resident information click, here.