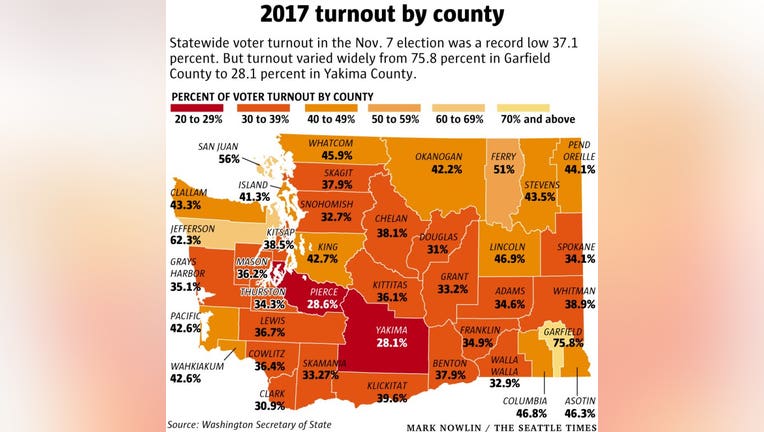 That beat out the previous record general-election low set in 2015, when turnout reached about 38.5 percent.

Results were certified this week.

Our news partner The Seattle Times reports that Washington state has tried to make voting easy, mailing ballots to every registered voter and giving them weeks to send them in. King County and others also have expanded the use of ballot dropboxes.

Nevertheless, about 2.6 million voters dumped their ballots in the trash or recycling bins instead of taking part in this year's elections to pick mayors, city councils and school boards across the state.

"I think it continues to be disappointing, and I think it should be a concern for our democracy," said state Rep. Zack Hudgins, D-Tukwila, who chairs the House Committee on State Government, Elections and Information Technology. "I think we get better government when we get more participation."

Erich Ebel, a spokesman for Wyman, pointed to a lack of statewide races and initiatives this year. "Ideally we would love to see everybody who is registered come out and vote," he said. "But a lot of that depends on what is on the ballot."

This fall was the first year since 1985 that Washington had no initiatives or referendums on the ballot, Ebel noted.

Voter interest typically shoots up in presidential-election years and dips in midterms and even further in odd-year elections. In 2008, the state set a record with 84.6 percent turnout when Barack Obama was elected to a first term as president.