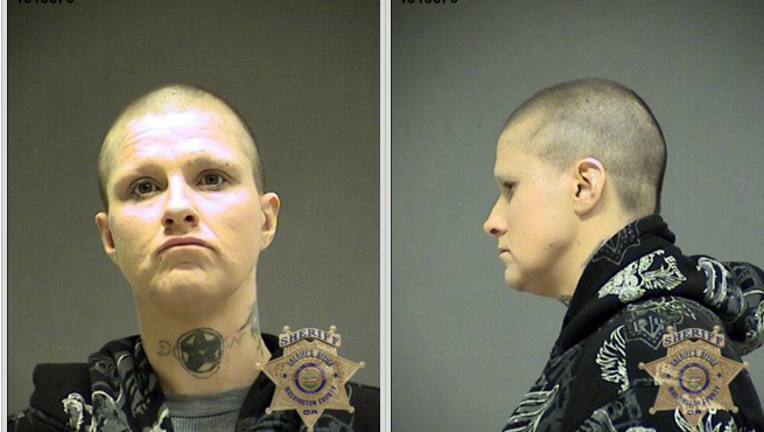 FUGITIVE CAPTURED November 23, 2015 -- Raven Cutler was arrested and booked into the Washington County Jail in Hillsboro, Oregon on Monday. The Yakima County Sheriff's Office says Cutler was caught after showing someone at a truck stop a newspaper article with her photo and that she was being sought in the murder investigation. Detectives say a call was made to local law enforcement and she was picked up. FUGITIVE WANTED IN YAKIMA COUNTY November 20, 2015 -- A woman is shot in the head three times. Her body is left down a rural road. Now, Yakima County detectives have named a ‘person of interest’ in the murder who they hope you can help find. Take a good look at the four photos of 16-time convicted felon, Raven Cutler. You can see she's inked with tattoos on her chest, neck and above her eyebrows. Detectives say her driver's license photo where she has a Mohawk haircut is the closest to how she looks now -- but they think she could be disguising herself as an older person by wearing a wig and walking with a cane. Detectives say Cutler mostly lives homeless, hangs out a lot in downtown Yakima and is believed to still be in the area. If you spot her, know where she is, or know anything that can help solve the brutal murder of 54-year-old Norma Emmerson, call an anonymous tip into: CRIME STOPPERS: 1-800-222-TIPS You must call the Crime Stoppers hotline with your tip to be eligible to receive a cash reward for information leading to a fugitive’s arrest. CLICK HERE for information on how to TEXT A TIP to Crime Stoppers