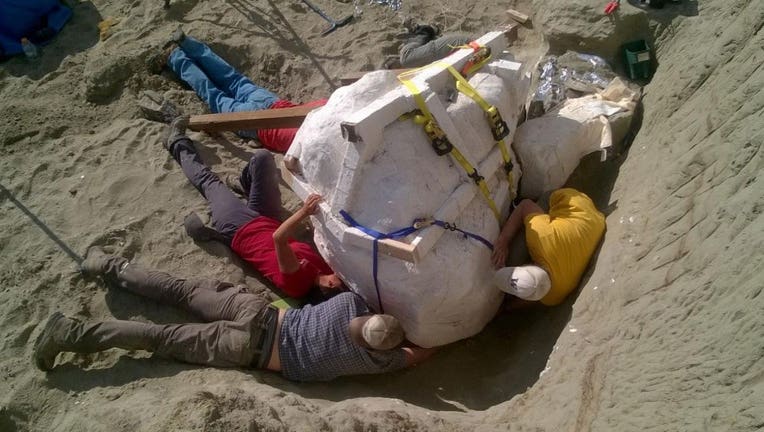 SEATTLE (FOX NEWS) -- On Saturday, a rare tyrannosaurus rex skull will go on display at the Burke Museum in Seattle, a discovery unearthed this summer in Montana.

The skull, which was covered in plaster to protect it, measures about 4 feet long and 3 feet wide, and is 66.3 million years old. Scientists aren’t sure whether the dinosaur was a male or female, but they do know that it was about 15 years old when it perished and ended up in what is now an ancient riverbed.

T-rex specimens are very uncommon. The museum says that this skull is only the 15th one to be found that is “mostly complete."

The first clue that a remarkable discovery was at hand came from the work of two volunteers who found large vertebrae in rock at the Hell Creek Formation in Montana. Eventually, the team unearthed ribs, hips, lower jaw bones, and even teeth of a T-rex, which in general grew to be as tall as 20 feet, according to the museum. They say they've excavated about 20 percent of the skeleton.

“The combination of the skull features, the size of the bones, and the honeycomb-like appearance of the bones tell us this is a T. rex,” Greg Wilson, the museum’s adjunct curator of vertebrate paleontology, said in a blog article that the museum published about the find. “This was a very exciting moment for us.”

A local farmer’s tractor lifted the plaster-covered skull onto a truck, and on Thursday, the specimen arrived at the museum in Seattle. The museum said it will be on display until October 2.

The specimen is called the “Tufts-Love Rex” in honor of the last names of the two people who first found it.