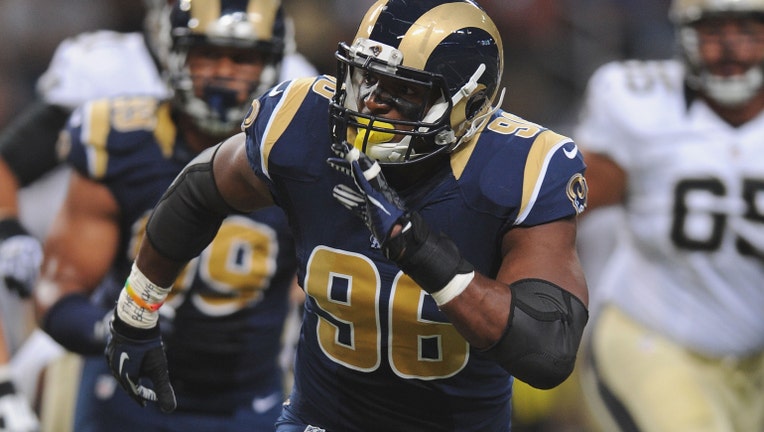 Michael Sam #96 of the St. Louis Rams pass rushes against the New Orleans Saints in a preseason game at the Edward Jones Dome on August 8, 2014 in St. Louis, Missouri. (Photo by Michael B. Thomas/Getty Images)


(CNN) -- The St. Louis Rams announced Saturday that Michael Sam, who made history as the first openly gay player to be drafted into the NFL, has been waived and did not make the team's final 53-man roster.

Sam, an All-American defensive end who played for the University of Missouri, made history when he was picked by the Rams in the seventh and final round. He was the 249th of 256 players selected.

The Rams' move does not necessarily mean the end of Sam's professional career. He could still be picked up by another team, possibly on waivers, or return to the Rams as a player on the practice squad, coach Jeff Fisher said.

"I want to thank the entire Rams organization and the city of St. Louis for giving me this tremendous opportunity and allowing me to show I can play at this level. I look forward to continuing to build on the progress I made here toward a long and successful career."

Another Tweet read: "The most worthwhile things in life rarely come easy, this is a lesson I've always known. The journey continues."

Fisher said Sam has the ability play somewhere. "It needs to be the right place and a good fit."

Sam, at 6-foot-2 and 260 pounds, starred in college football last season. Besides being first team All-American, he was named the top defensive player in the Southeastern Conference, considered the nation's best league. Teammates named him the team's most valuable player.

On Saturday, Sam returned to his college in Columbia, Missouri, to be honored at the game against South Dakota State.

Fisher said Sam worked hard, but the team already had a lot of strong defensive ends.

"Mike fit in very, very well" at training camp, Fisher said. "He was fun to be around and he was a good teammate."

Bleacher Report said the contracts of players on waivers can be picked up by other teams within 48 hours. If the contracts are not picked up, the players can become unrestricted free agents.

Teams, including the Rams, could put Sams on their practice squads.

Sam worked with the second and third units during the preseason and made 11 tackles and recorded three sacks, said Bleacher Report.

Sam told his college teammates he was gay and made a public announcement shortly before the NFL draft in May. When he was drafted, he made waves kissing his boyfriend in celebration as cameras looked on.

Being drafted was historic and Sam received a congratulatory phone call from President Barack Obama.

"I'm determined to be great," Sam told reporters after the draft. "So I'm going to train hard and try to make the team."

Fisher said the talked one-one-one with all the players who were released except Sam. He said he will talk to him in person Sunday.

Other athletes have come out as gay, but they didn't have Sam's profile. Among them are the NBA's Jason Collins, the WNBA's Brittney Griner, WWE's Darren Young, UFC's Liz Carmouche, MMA's Fallon Fox and Major League Soccer's Robbie Rogers.

The road to football stardom was not an easy one for Sam.

One of eight children, he grew up in Hitchcock, Texas, where he was raised primarily by his mother. At one point, he has said, he lived out of his mother's car and briefly stayed with another family.

Three of Sam's siblings have died, including an older brother he saw die from a gunshot wound. Two of his brothers are serving prison sentences.


Drew Iden of CNN contributed to this report.