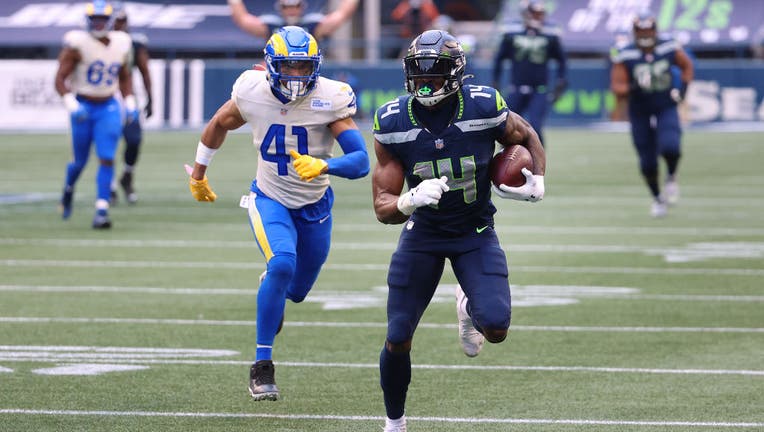 SEATTLE, WASHINGTON - JANUARY 09: DK Metcalf #14 of the Seattle Seahawks scores a touchdown against Kenny Young #41 of the Los Angeles Rams in the second quarter during the NFC Wild Card Playoff game at Lumen Field on January 09, 2021 in Seattle, Was

WR Cooper Kupp. There is little the Rams’ top wide receiver enjoys more than coming home and putting up a big game against the team he grew up watching. The former star at Eastern Washington has 29 career receptions and two touchdowns against the Seahawks in Seattle. Kupp has quickly bonded with QB Matthew Stafford and leads the NFL with five TD catches.

RB Chris Carson. It’s hard to make sense of Carson’s season to date. He’s rushed for at least 80 yards twice. He’s been held to 30 and 31 yards in the other two games. He hasn’t carried the ball more than 16 times in a game, but is averaging a solid 4.3 yards per attempt. In five career games against the Rams, Carson has rushed for at least 69 yards in each and has a pair of 100-yard games. This seems a week to raise his workload.

DK Metcalf vs. Jalen Ramsey is always a must-see matchup. Seattle’s huge receiving target against the Rams’ lockdown cornerback will make for great theater. Metcalf has been bothered by a foot issue that popped up last week and had just four catches on eight targets at the 49ers.

Seattle’s defensive line could be thin with Darrell Taylor (ankle), Benson Mayowa (neck) and Carlos Dunlap (toe) all uncertain due to injuries. The Seahawks have been playing more alignments with five defensive linemen, but might lack the depth to do so against the Rams.

This will be the 48th matchup between the teams, including the postseason. The 47th will long stand out for the Rams coming into Seattle and winning 30-20 in last season’s NFC wild-card game. The Rams took a 20-10 halftime lead and led 30-13 in the fourth quarter. It was the first home playoff defeat for Seattle since losing to the Rams in the 2004 playoffs. ... The last time the teams played on Thursday night was 2019 when Seattle won 30-29.

The Rams are 3-1 in Thursday games under Sean McVay, the only loss coming in Seattle in 2019. ... Stafford is second in the NFL in TD passes (11) and third in yards passing (1,222) and passer rating (117.6). He’s the only quarterback this season with at least 275 passing yards and two TD passes in each of the first four games. ... In 14 career games Aaron Donald has 15 sacks and 40 QB hits against the Seahawks. ... Wilson is one of two quarterbacks this season with at least 100 pass attempts who has not thrown an interception. Denver’s Teddy Bridgewater is the other. ... Wilson leads the league with a 129.9 passer rating. ... Wilson has had a passer rating of 110-or-higher and no interceptions in each of his first four games this season, joining John Hadl in 1973 and Milt Plum in 1960 as the only players to accomplish that.

McVay said he expects RB Darrell Henderson Jr. to play despite sore ribs. That’s big against a Seattle defense that is last in the NFL in yards rushing allowed and is giving up 4.6 yards per rushing attempt.